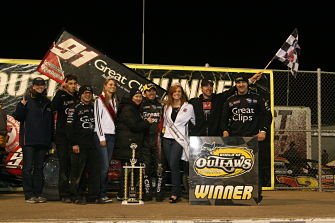 Rossburg, OH — Paul McMahan had been knocking on the door for the last few weeks as he looked for his first win of the season, racking up six Top-Five finishes in his last eight starts. He broke through on Saturday night in impressive fashion

at Eldora Speedway in the finale of Outlaw Thunder by Goodyear for the World of Outlaws to score his first win of 2010 and his first since joining Kasey Kahne Racing earlier this season to fill in for the injured Cody Darrah.

McMahan used a strong restart on the 28th lap after lining up on the low side of the track on the double file restart while running second. He used a masterful slide job in turn one to take the lead from Sammy Swindell and would withstand one final double file restart to take home the $10,000 triumph, which was the ninth of his World of Outlaws career and his first with the series since 2007. It was his second career win with the series at Eldora.

“I can’t say enough about everyone on my team and just Kasey Kahne believing in me and giving me a shot,” said McMahan in Victory Lane. “It was an unfortunate situation of how I got in this race car with Cody (Darrah) getting hurt, but I’m taking the opportunity that I have and it’s nice to get back to Victory Lane. It’s been a long time.”

The race began with Sammy Swindell taking the lead from Jac Haudenschild who started on the pole as the pair of Hall of Famers entered turn one. Joey Saldana moved into third on the opening circuit as the lead trio spread out a bit. Swindell set a blistering pace early in the race and was in lapped traffic just five circuits into the 30-lap contest.

Swindell masterfully worked his way through traffic and had a huge lead with five laps to go when a red flag flew for a Cale Conley flip. On the ensuing restart, Swindell chose the high side of the track and despite significant damage to his machine was able to jump out to a lead. The caution came out with three laps remaining for Joey Saldana who had a flat tire while running third, as well as Craig Dollansky who was running fourth.

On the double file restart that followed, Swindell again chose the outside line and led the field into turn one, where McMahan was able to take the lead. McMahan began the night by turning the quickest lap in time trials for the second consecutive night aboard the Great Clips Maxim.

“We weren’t that good and then that red flag came out and the tires cooled off or something,” noted McMahan. “We had that restart and I drove that thing down in the middle and it stuck and I got by Sammy (Swindell). I was a little concerned when the yellow came back out with Sammy having another shot at me.”

After taking the lead, McMahan opened a slight lead while Danny Lasoski battled Swindell for the runner-up spot. The final caution of the night flew with a couple of laps remaining leading to one last double file restart. McMahan chose the outside line for the restart en route to the win.

“It was a pretty easy choice,” he stated. “The inside lane I didn’t think was very good and we had a pretty good restart there. The outside lane seemed to be the best choice and I just had to beat Sammy into (turn) one and he tried to give me a slider and I kind of pinched him a little bit to make sure he couldn’t get a full slide job on me. Once I got out front, I think it was smooth sailing after that.”

Lasoski started 16th and steadily worked his way to the front on his way to a runner-up finish in the Casey’s General Store JEI. Lasoski lined up fourth on the final restart and was able to get around both Daryn Pittman and Swindell to gain two spots.

“The car was operating very good and we came from way back,” said Lasoski. “I can’t say enough about this JEI car, with Kistler power and the crew. My hat’s off to the 91 car, they did a great job. I think Sammy (Swindell) had some trouble with his wing. For me this was like a victory tonight.”

Swindell led the first 27 laps of the race and was in control until contact with Cale Conley damaged his machine. He sustained a broken wing cylinder and also had some oil leaking from his machine during the following red flag. The three-time series champion wound up third as he continues to fill in for the injured Terry McCarl in the Big Game Treestands Maxim.

“We kind of messed up some stuff down there,” explained Swindell. “That wheel got out in front of me and I ran it over and I was lucky to save it. These guys gave us a great car and I thought we were going to lap the field. We were catching those guys so easy. The car was way loose after that and the wing was about a foot or foot and a half forward of where we had it.”

Steve Kinser finished fourth on Saturday night to earn his series leading 11th Top-Five finish of the season in the Bass Pro Shops Maxim for Tony Stewart Racing. He also took over the top spot in the series standing by three markers over Jason Meyers, who finished 13th.

Kraig Kinser earned the Chizmark Larson Hard Luck after his team changed engines a few times over the course of the night, before having additional engine problems in the main event.

The World of Outlaws return to action on Thursday, May 13 and Friday, May 14 at the famed Williams Grove Speedway in Pennsylvania for two full nights of racing.