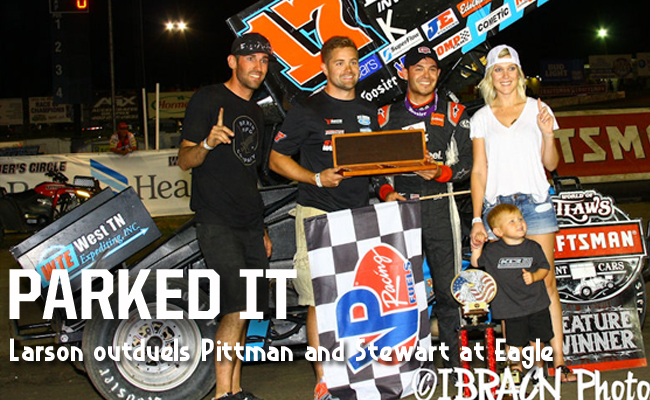 Larson Parks It at Eagle Raceway

EAGLE, NE — June 14, 2017— After leading 29 of the 30-lap Feature, Daryn Pittman couldn’t withstand the late-race charge from Kyle Larson and Shane Stewart. Larson whipped around the top-side of the high-banked third-mile track to go by Pittman en route to win the return of the World of Outlaws Craftsman® Sprint Car Series at Eagle Raceway.

Good friends away from the track, Larson and Stenhouse Jr. also share a special bond, having been really close friends with the late-Bryan Clauson.

Stenhouse Jr. during the off season teamed up with Matt Wood to form Stenhouse Jr. Wood Racing — the team that Clauson raced with before his tragic death in 2016.

When the 24-car field got the green flag, it was Daryn Pittman that got the jump and rocketed out to the lead — a lead that he had to relinquish because of a yellow flag for a spinning Paul McMahan and Jason Johnson. The field would have a complete restart with the yellow coming out before a lap could be completed.

Once the field got back going again, Pittman once again found himself out front, holding off eight-time and defending World of Outlaws Craftsman Sprint Car Series champion, Donny Schatz.

Having worked his way up from the sixth starting-spot to inside the top-five at the time of a red flag on Lap 12. It was the No. 2KS and No. 82 who got upside-down in Turn 3; both drivers were able to walk away unscathed.

Back under green, Larson Marks Racing’s Shane Stewart and Kyle Larson put the pressure on second place Donny Schatz. With under 10-laps remaining, both Stewart and Larson were able to get by and set their sights on the leader, Pittman.

“I got racing Shane [Stewart] pretty hard — I have fun racing him,” said Kyle Larson.

Navigating their way through lap traffic through Turns 3 and 4 with less than three laps to go, Stewart stuck to the bottom of the track while Larson went to the top. As the two entered Turn 1, they banged wheels; Larson was able to gain the second position.

With his sights clearly set on the leader, Larson kept his No. 17K wound up on the top-side of the Eagle Raceway to get by Pittman to lead the white flag lap. Larson would go on to win

“We are there [close to a win], unfortunately we just need to finish it out,” said Daryn Pittman. “Second sucks. We haven’t been in the position all year and here we were. [Kyle] ran a good race and we just got beat.”

Clearly a special win for Larson and the Stenhouse Jr. Wood Racing team as Larson paid homage to an old friend, Bryan Clauson in Victory Lane.

“I can’t believe I parked it here, it’s pretty cool. I think this is this team’s first win, so happy to be a part of that.”

Larson joked in Victory Lane that he had three crew chief’s at Eagle, Ricky Stehouse Jr., Tyler Swank and David Fero, a crew member on his No. 42 NASCAR entry.

This win marks the first Outlaws win for the newly formed Stenhouse Jr. Wood Racing. This is Larson’s firth overall World of Outlaws Craftsman Sprint Car Series win; first since 2013 and his first Outlaws win outside of his home state of California.

The World of Outlaws Craftsman Sprint Car Series is back in action on Friday, June 16 when the Series visits River Cities Speedway in Grand Forks, N.D. The Series will then continue onto Red River Valley Speedway on Saturday, June 17. For tickets, visit WorldofOutlaws.com/tickets.