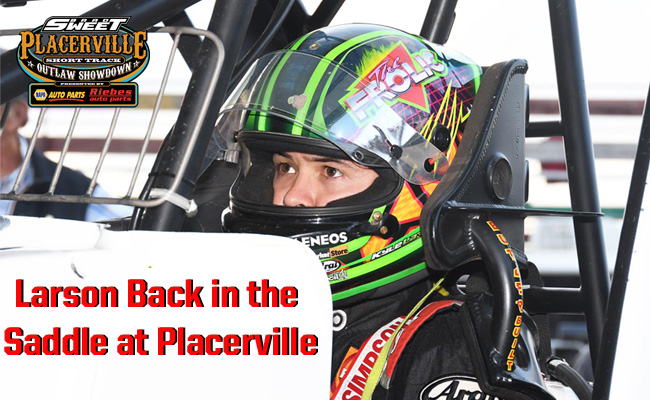 During it fans from the Golden State will have a special treat, as Monster Energy NASCAR Cup Series point leader Kyle Larson of Elk Grove, CA will be in competition.

Larson is returning to the track that produced his first career sprint car win. “I am excited to race in front of a lot familiar fans at Placerville Speedway and to also get the chance to compete against the best sprint car drivers in the world,” said Larson.

“Last year we had Kyle scheduled to race with us on that Wednesday night but unfortunately he wasn’t able too because of an injury he sustained in the NASCAR series the weekend prior to our event,” said Sweet. “I know how disappointed he was last year in not racing against us but I also know how much he is looking forward to competing at this year’s race.”

Reserved tickets are going fast but fans are still able to purchase their tickets for Brad Sweet’s Placerville Short Track Outlaw Showdown presented by NAPA Auto Parts and Riebes Auto Parts by following this online link at dirtcar.ticketforce.com Reserved tickets are $45 per seat. Fans can purchase pit passes / general admission seating on the day of the event but those seats are all first come first serve. Tickets and will call booth will open at 2 PM. Pit gate opens at 2 PM. Grandstands open at 4 PM with sprint car qualifying slated to begin at 6:30 PM.

An overabundance of sprint car stars will be joining Larson at Brad Sweet’s Placerville Short Track Outlaw Showdown presented by NAPA Auto Parts and Riebes Auto Parts. Leading the charge is Fargo, North Dakota’s Donny Schatz. The eight-time World of Outlaws champion and inaugural winner of the Sweet race at Placerville drives the Tony Stewart Racing/Arctic Cat/Ford Performance/No. 15. Last year’s winner Jason Johnson of Eunice, LA is set to get his Fischer Body Shop/Waco Metal No. 41 back into victory lane to collect the $10,000 payday. Both Schatz and Johnson went on to win sprint car racing’s biggest prize, the Knoxville Nationals, in the same year they won the Placerville Short Track Showdown.

Kasey Kahne Racing teammates Daryn Pittman of Owasso, Oklahoma, driving the Great Clips No. 9 and the event organizer Brad Sweet of Grass Valley, driving the NAPA Auto Parts No. 49 are two of the favorites heading into this race. Other top drivers with the World of Outlaws include Shane Stewart, of Bixby, OK, who drives the Larson/Marks racing No. 2, the Brownsburg Bullet Joey Saldana in the Elk Grove Ford/Roth Investments No. 17 for the newly-formed Stenhouse Jr.-Wood Racing team and another local favorite Paul McMahan of Nashville, TN by way of Elk Grove, CA driving the Destiny Motorsports No. 4.

Sweet has once again booked the popular USAC Western States Midgets as his companion division with the World of Outlaws. “I felt the midgets put on a great show and it gives the fans a nice mix between the winged sprint cars and non-wing midgets,” said Sweet.

On March 29th, it will mark Sweet’s third time being a promoter. His own career started at local tracks like Placerville Speedway. “It feels good to be a part of something local,” said Sweet. “The outpouring of support from the fans, sponsors and teams has been overwhelming.”

Even though Sweet will be wearing the promoter hat don’t forget that he is also a fierce competitor behind the wheel.

Sweet is a 21-time winner in the World of Outlaws Series and earned the Kevin Gobrecht 2014 Rookie of the Year honors. He has won prestigious races such as the Kings Royal at Eldora (2013), the Short Track Nationals (2010) and Belleville Nationals (2008). He also has six career top-10 finishes in the NASCAR XFinity Series driving for JR Motorsports and Turner Motorsports.

The traveling Outlaws will have their hands full with a talented field of local drivers led by Rutherford’s Rico Abreu. The popular Northern California driver has beat the Outlaws before and will get another chance at the Placerville Short Track Showdown. Reigning King of the West champion Kyle Hirst of Paradise is back with Roth Motorsports No. 83. Auburn’s Andy Forsberg is a multi-time champion at Placerville Speedway and will look to put the A & A Stepping Stone No. 92 in victory lane. Campbell’s Bud Kaeding, Hanford’s DJ Netto and Cory Eliason of Kingsburg are other California based driver’s hopeful of beating the World of Outlaws at Brad Sweet’s Placerville Short Track Outlaw Showdown presented by Riebes Auto parts.