Knoxville Nationals On the Horizon 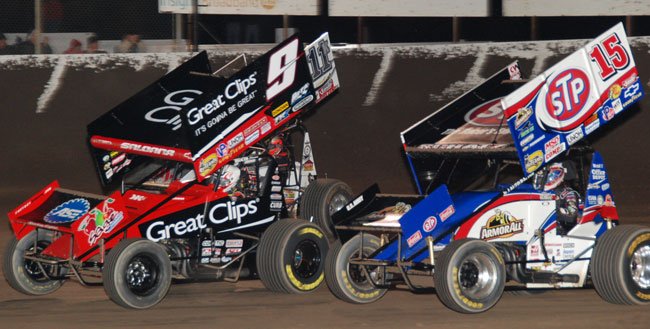 Outlaws Heat Up as the Goodyear Knoxville Nationals Gear Up

KNOXVILLE, Iowa — July 30, 2012 — During one of the hottest summers in recent memory, the World of Outlaws Sprint Car Series championship battle has sizzled.

The top five drivers – made up of Steve Kinser, Donny Schatz and Sammy Swindell, who have combined for 27 championships, and first-time hopefuls Craig Dollansky and Joey Saldana – are separated by only 49 points as the premier weekend of the season approaches.

Those drivers have also united to claim 18 titles at the Goodyear Knoxville Nationals, which begins its 52nd edition on Thursday, Aug. 8. The four-day event wraps up with the $150,000-to-win feature on Saturday, Aug. 11.

“Everybody puts a lot of time into that Nationals,” he said. “It’s a big race for everybody. You’ve got to get yourself in position to win that race. You’ve got to run good in the preliminary night to give yourself an opportunity to win it. You’ve got to put it all together all weekend, not just Saturday night.”

Schatz has been the driver to beat in recent years after garnering five wins in the last six events.

“We’ve just had a great group of guys that have put us in good position every time,” he said. “And even if we’ve got ourselves in a bad position, we’ve had a great race car and been able to overcome the hurdles.”

Sammy Swindell won his lone Goodyear Knoxville Nationals title in 1983, but after winning the Kings Royal a couple of weeks ago, is as determined as ever.

The preliminary nights of Wednesday and Thursday, Aug. 8-9, for the 52nd annual Goodyear Knoxville Nationals have been released and feature nearly 100 competitors vying for the top 16 spots based on points, which are locked into Saturday’s feature.

All other drivers will compete on Friday, Aug. 10, in a new format that will advance the top four to Saturday’s main event. All remaining competitors will duke it out through consolation features on Saturday leading up to the biggest payday of the season and the prestigious title of Goodyear Knoxville Nationals champion.

Tickets for the 52nd annual Goodyear Knoxville Nationals can be ordered online at KnoxvilleRaceway.com.