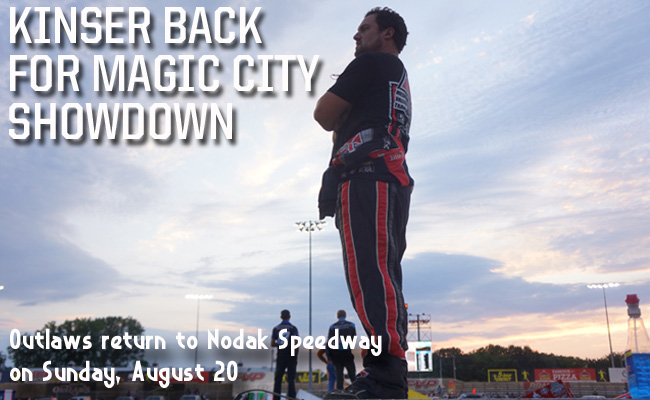 Up to Speed: Kraig Kinser back at Nodak Speedway for Magic City Showdown

MINOT, N.D. — August 16, 2017 — While it’s been a couple of years since he last raced at Nodak Speedway, past history dictates that Kraig Kinser shouldn’t have too much of a problem getting back up to speed at the track located at the North Dakota State Fairgrounds in Minot. After all, he has finished in the top-10 in seven of his eight career starts at the track, with four of those being top-five performances.

The first time he ever raced at Nodak Speedway back in 2008, Kinser finished third and has been among the top-five in each of his last two starts at the track in 2014 and 2015.

Kinser returns to Nodak Speedway on Sunday, August 20 as the World of Outlaws Craftsman Sprint Car Series makes their annual visit to the three-eighths-mile for the Gerdau Recycling Magic City Showdown Presented by Schatz Crossroads Truck and Fastlane Car Wash.

“You look at your notes from the past and see what you were doing different between there and other places and get a game plan together when you get there,” said Kinser when asked about returning to a track. “I get around Minot fairly good, about as good as quite a few guys, so I’m definitely looking forward to going back. Knowing that we are pretty good at a place, definitely helps confidence going in there.”

The third-generation driver picked up his first World of Outlaws Craftsman Sprint Car Series win of the season on July 6 at Deer Creek Speedway in Minnesota. Kinser started eighth in that race and steadily worked his way forward, taking the lead on the 15th lap of the 40-lap event. That win came a week after a near-miss at The Dirt Oval at Route 66 in Illinois, which saw Kinser dominate that race, charging from 11th to the lead in just five laps and then pacing the next 20 circuits, only to lose power steering in the late going, which dropped him to eighth.

“Getting that win definitely lifted our spirits,” he shared. “The fact that we have our car rolling around good and things are starting to fall into place was big. We are going to keep working hard and building. We have little things that we are still picking up on and hopefully we can get it all figured out.”

Kinser has been showing quite a bit of speed and added consistency over the last month or so. This has been reflected in his results, as he has finished in the top-10 in 13 of the last 16 races. Along with his win at Deer Creek, Kinser finished among the top-five at Hartford Speedway in Michigan and on the opening night of the Ironman Weekend at Federated Auto Parts Raceway at I-55 in Missouri.

“We’ve been better prepared when we get to the race track, which is huge out here against these guys,” explained Kinser. “We’ve been changing little things around when we find something and those help. We are finding things and learning how to put them into play on the track.”

Kinser is the lone driver on the World of Outlaws Craftsman Sprint Car Series circuit that utilizes a DRC chassis, which is manufactured by Joe Devin on the famed Gasoline Alley in Indianapolis. The win at Deer Creek was the first for Devin’s company with the Outlaws, after winning numerous USAC non-wing sprint car races and manufacturer of the year awards in that discipline.

“It was huge to get Joe (Devin) a win,” said Kinser. “With all of the work he has been doing for us and the help he has been giving us. It felt great to get him in victory lane and hopefully there will be more to come.”

With sprint car racing’s biggest event, the Knoxville Nationals now in the books, many drivers looks at the remainder of the season as being less stressful and even “relaxed.” Kinser is quick to point out that when racing against the “best of the best,” each and every night, a driver and team has to always be on their game and performing 100-percent.

“You can never relax, especially when you are racing with the World of Outlaws, with all of the competition that is out there,” he noted. “Everyone puts their best foot forward at Knoxville and then when you leave there, some guys will be even more up on the wheel, if they had a bad showing at Knoxville. Everyone will still be racing just as hard after the (Knoxville) Nationals as they were before.”

With around 30 nights of racing remaining this season, Kinser is currently eighth in points, less than 25 markers behind Sheldon Haudenschild who sits seventh. The native of Bloomington, Ind., has recorded 21 top-10 finishes, with five of those being top-five showings.

“We’ll keep working on our program and our goal is to be to the point where we are a threat day in and day out,” said Kinser. “If we can keep getting top-fives the points will play out where there at. To be more consistent and consistently up front is what we are after.”

Tickets for the Gerdau Recycling Magic City Showdown Presented by Schatz Crossroads Truck Stop and Fastlane Car Wash, featuring the World of Outlaws Craftsman Sprint Car Series at Nodak Speedway on Sunday, August 20 can be purchased online at https://slspromotions.ticketforce.com or by phone at 815-344-2023 and at the track on race day.

Fans can also save $5 on General Admission tickets when purchased at participating NAPA Auto Parts stores. Tickets buyers will exchange their NAPA receipt for a race ticket at the Main Grandstand ticket booth on race day.