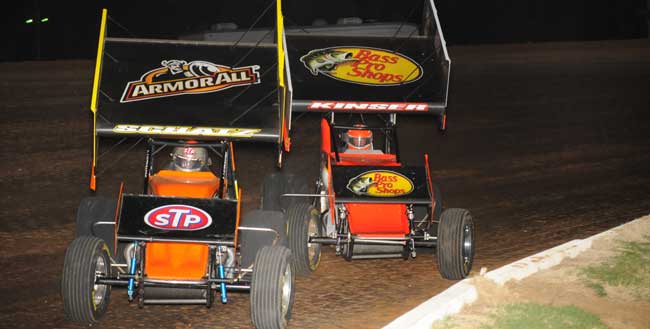 Can Schatz and Kinser Repeat at DIRTcar Nationals by UNOH?

Stewart put together a team with 24 series championships combined. Fans were somewhat awestruck by the pairing fierce competitors Schatz and Kinser under Stewart’s ownership. Many figured the championship battle would come down to the two TSR stars.

It was tough to argue, too, when they showed off their domination beginning with the initial green flag at Volusia Speedway Park. Schatz captured opening night and Kinser followed up with a victory one night later. Of course, the season played out and while Schatz and Kinser were in the title hunt all year, Kasey Kahne Racing’s Joey Saldana and Jason Meyers didn’t back down, with Meyers becoming the first Californian to win a World of Outlaws championship.

Now, a year later entering the 40th Annual DIRTcar Nationals by UNOH beginning Tuesday, Feb. 8, the expectations remain sky high for the TSR team. Schatz surged down the stretch last fall but came up just short as Meyers dominated the World Finals at Charlotte. Another successful off-season of racing in Australia will give Schatz the momentum he counts on for a fast start. As for Kinser, last year marked the first time since 2005 he was back atop the championship hunt during the heat of the season. Entering this year’s opener at Volusia, there’s little doubt everybody will be wondering if Schatz can win a fifth title or if Kinser can capture his 21st crown.

“It wasn’t a bad first season at Tony Stewart Racing,” said Kinser, of Bloomington, Ind., and one of the original Outlaws in 1978. “We were right in the hunt all year. We won some races, but just had a few bumps in the road and that’s what ended up costing us the title.”

After four consecutive World of Outlaws championships, the competition finally caught up to Schatz last year. However he knows the ground he made up down the stretch combined with his focused effort in Australia during the winter gives him a bit of an edge this week at Volusia Speedway Park, which is just a short drive from Daytona Beach, Fla.

“Last year we didn’t adhere to the changes like we needed too and that put us behind a little bit,” said Schatz, of Fargo, N.D. “We learned a lot at the end of last year and used Australia as a stepping stone and really figured out the things we needed to get back on top.”

A noticeable difference in the Schatz’s #15 ride this year will be a completely new look as STP has become his team’s primary sponsor.

“We’re really excited to be a part of the promotion of STP and hopefully can be as successful for them as we have been for Armor All.”

Despite having 2010 seasons that many drivers would be proud of, Schatz and Kinser expect to win races and championships. That’s clearly their goal in 2011.

“The bottom line is that we were good for a majority of the season,” Kinser said. “If we get back to that level again this year and can eliminate a few of those rough nights, I feel like we’ll be right there all year long.”

“You go out one day at a time and win as much as you can,” Schtaz said. “That’s where this team deserves to be and where I expect to have them.”