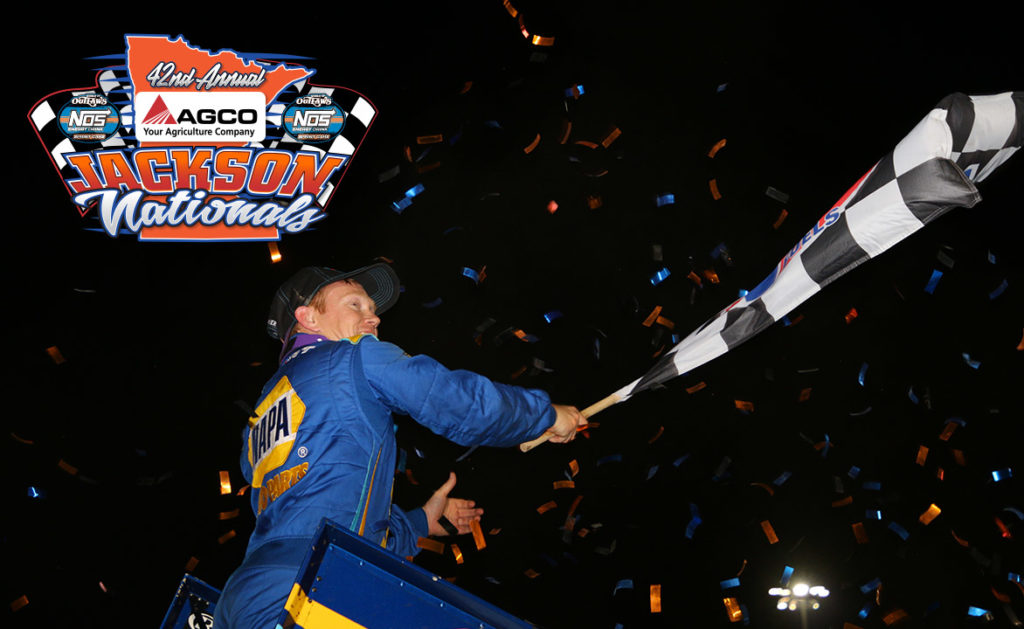 Drivers have individual races they circle with special personal meaning, but there are only a handful of events where every driver dreams of victory for different reasons — the AGCO Jackson Nationals is in good company amongst the NOS Energy Drink Knoxville Nationals, Kings Royal, National Open, World Finals and DIRTcar Nationals to name a few.

The prestigious event at the immaculate Jackson Motorplex on June 25-27 is in its 42nd running this year, and the fourth year as a World of Outlaws NOS Energy Drink Sprint Car Series event. In that short time, the three-day event has quickly become the newest crown jewel for the Series.

“It’s been really neat to see what Tod (Quiring, track owner) and his team have done to Jackson,” said reigning Jackson Nationals winner and Series Champion Brad Sweet. “He’s turned it into one of the premier dirt track facilities in the country. And now he’s building a premier event, the AGCO Jackson Nationals. As a racer, I can’t express how much I appreciate his investment in the sport.”

Quiring, president and founder of Mainstream Holdings, Inc., which includes Big Game Tree Stands, purchased Jackson Motorplex from the county in 2015 with the vision of building a world-class facility and the Jackson Nationals into a marquee Sprint Car event. He was familiar with the track, which was originally a half-mile and then turned into a 4/10-mile, due to his corporate office being located in the same area.

The AGCO Jackson Nationals has always been an event that racers circled on their calendar, but only in the past few years since Quiring and his team revamped Jackson Motorplex and brought the event to the World of Outlaws schedule has its prestige continued to increase.

“We built a nice facility to host premier events,” Quiring said. “With this being our premier event, and the partnership we have with the World of Outlaws, we’ll make it through this year for the Nationals and move forward for years to come.”

Even with mass gathering restrictions and the COVID-19 pandemic limiting the amount of fans the facility can have for the three-day event, event Title Sponsor AGCO (the global leader in the design, manufacture and distribution of agricultural equipment), Jackson Motorplex and the World of Outlaws NOS Energy Drink Sprint Cars have joined forces to ensure that the event will be the highest-paying Sprint Car race of the year to date.  Saturday’s finale will be $30,000-to-win and $1,000-to-start. Thursday and Friday’s events will pay $8,000-to-win and $600-to-start.

“It’s definitely a crown jewel event in my eyes already and I know he’s only getting started,” Sweet said of Quiring’s vision for the event. “I look forward to watching it grow and I’m excited I get to be a part of it.”

The format for the 2020 AGCO-sponsored affair will be similar to 2019. Teams will accumulate points, based on their finish, over the first two nights, setting up the lineups for the Saturday night finale. There will be no limit on entries for 410 Sprint Cars. Drivers will register at WorldofOutlaws.com to enter with the registration link forthcoming.

A limited number of fans will be allowed in the grandstands during the three-day event. Social distancing and CDC guidelines will be in place to ensure the safety and well-being of each attendee, but all three nights will be broadcast live on DIRTVision and all three included in its FAST PASS subscription for just $39 per month.

Camping is available on the grounds for those who already have advance reservations, but camping for the event had already been sold out and is a hot commodity at the Minnesota complex.

Support divisions, limited to 24 cars, will join the World of Outlaws each night. The IMCA Racesaver Sprint Cars will run Thursday night, while the Wisconsin WingLESS Sprint Cars will be highlighted Friday and Saturday night.