GROWING WINGS: Courtney looks for sun to shine on a World of Outlaws career 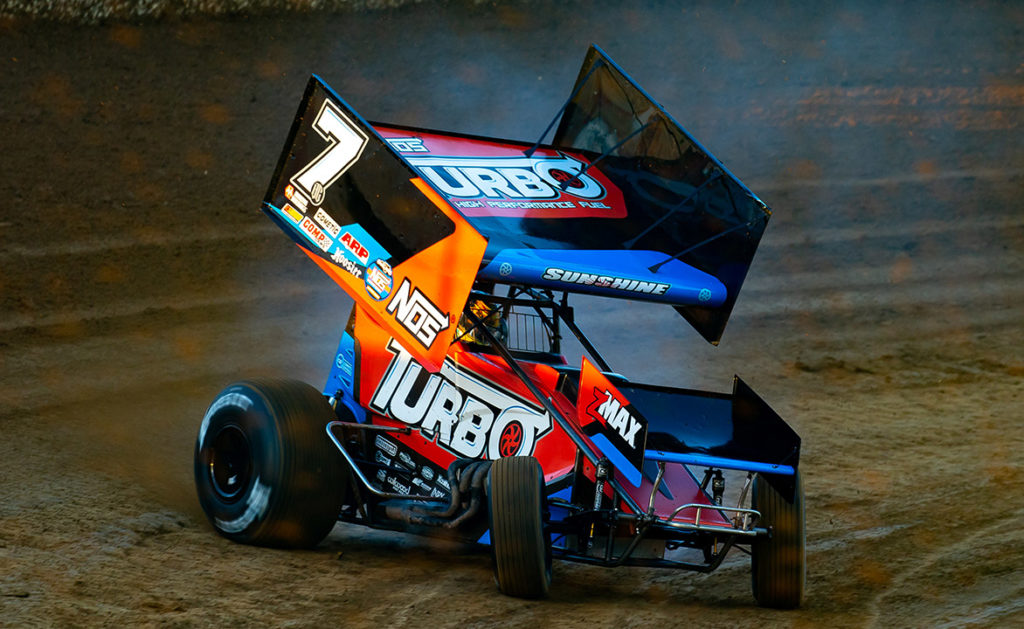 With national titles in a USAC Midget and Sprint Car checked off his list, open-wheel standout Tyler Courtney has his sights on the World of Outlaws NOS Energy Drink Sprint Car Series.

The 26-year-old Indianapolis, IN native, known as “Sunshine” to many, is running for the USAC National Midget title again this year with Clauson Marshall Racing, but also has a handful of winged Sprint Car races scheduled with the team.

Several of those races will be with the World of Outlaws, including this weekend at Knoxville Raceway for the June 12-13 Brownells Big Guns Bash. Courtney is among a star-studded entry of more than 50 drivers that include reigning champion Brad Sweet, 10-time Series champion Donny Schatz, three-time Series champion Sammy Swindell, Kyle Larson and Kasey Kahne.

It’s all in preparation to help him make the next step in his career.

“If I can make it to the Outlaws, that’s kind of my next goal right now,” Courtney said. “I’ve done what I’ve wanted to do in the USAC non-wing and midget kind of things. My next step is to become a World of Outlaw and see if I can do this with these guys night in and night out.”

Courtney made a good impression his first night out with the Series at Lake Ozark Speedway in May. He won his Drydene Heat Race and earned a career best 11th place finish in his NOS Energy Drink Turbo #7BC – his previous best finish with the World of Outlaws was 16th at Eldora Speedway in 2016.

The result exceeded his own expectations and left him wanting more.

“I was kind of bummed because I thought we could run top-10 from where we started,” Courtney said. “But when you run 11th and look at the 10 guys that ran ahead of you, it’s kind of hard to be disappointed in it. Coming to run with these guys, it’s not easy. They make it look easy when you watch them on DIRTVision and things like that, but when you come and do it in person it is a whole different story.

His following night at the track didn’t fare as well. While he made the Feature, contact in the first few laps with Kerry Madsen took them both out of the event.

In his first two races with the Series this year, Courtney said he learned there’s no room for error with the Outlaws.

“When you come here, your mistakes get pointed out more because these guys are… this is their job,” Courtney said. “This is what they do night in and night out. If you make a mistake, they’re going to pounce on it. That’s how it goes.

One of the most valuable lessons he learned while racing against drivers like Brad Sweet and Donny Schatz is you have to be aggressive, he said. They’re not going to wait for you, so you can’t wait for them.

While it takes him a lap to get into a rhythm with his car, World of Outlaws drivers are tuned in from the second they touch the throttle, he said.

“You take one lap here to do anything with these guys you’re losing spots,” Courtney said. “If I can take that from a lap to a half a lap or no lap at all, I feel like I’ll have a better chance. But this is what I wanted to do. This is the challenge I wanted to take on.”

Aside from his one bad night with the World of Outlaws, Courtney has been strong in every winged Sprint Car start he’s made this year. He won his first night out with the car at St. Francois County Raceway and recently finished third at a track event at Knoxville Raceway.

He knows there’s still a learning curve to conquer before being able to compete with the likes of Sweet and Schatz each week, but also knows he can rely on friends like Kyle Larson, who have come from the USAC ranks, and even drivers like Sweet.

“Brad (Sweet) the other night, he got done flipping really hard and I went to check on him and he’s telling me things that I need to do different,” Courtney said with a chuckle. “I’m like ‘Dude, you just flipped your car. You don’t need to be helping me.’ He’s like, ‘You could have done this, and it would have helped you here and there.’ It’s just really cool to come here and a guy like Brad, your defending champion… that’s a champion through and through right there. To be able to obviously be worried about what he has to do for the rest of the night, but to take the time and help a guy.”

No matter how many World of Outlaws races Courtney gets to run this year, he’s ready to get after the next step in his career.

Tickets for the June 12-13 Brownells Big Guns Bash at Knoxville Raceway can be purchased here.

If you can’t make it to the track, you can watch both nights of action live on DIRTVision.