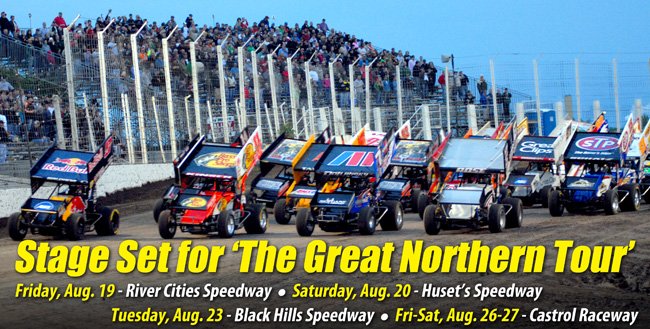 World of Outlaws Great Northern Tour Takes Off After Knoxville

Now following the Knoxville Nationals, the Outlaws will compete Friday, Aug. 19, at River Cities Speedway in Grand Forks, N.D., then head Saturday, Aug. 20, to Huset’s Speedway near Sioux Falls, S.D., and finally make their way on Tuesday, Aug. 23, to Black Hills Speedway near Rapid City, S.D. That sets the stage for the Oil City Cup on Aug. 26-27 at Castrol Raceway in Edmonton, Alberta, as the series makes its way to the West Coast for the annual Gold Rush Tour.

“I feel terrible for my friends and family members of Minot who have been suffering through the Souris River flood that has damaged so many homes and businesses in addition to Nodak Speedway, which was used to build a dike around the new grandstand,” said SLS Promotions’ Larry Hillerud. “Fortunately we were able to work out a deal with other tracks to put together this series of events following the Knoxville Nationals. We know the Outlaws had a previous event rained out at Huset’s last month and we will be honoring the original tickets purchased for that race. We’re excited, too, for pit parties at Huset’s and Black Hills, we believe the fans will have a great time.”

A pit/ticket combo package is available for the events at Huset’s Speedway and Black Hills Speedway. The package allows advance ticket purchasers the option of going between the grandstands and the pit area throughout the evening to see the teams work on the cars as the night goes along. Advance ticket holders will also be able to pick up a special Class of 2011 World of Outlaws Sprint Car Series poster upon their arrival in the pits featuring all of the regularly touring teams that compete with “The Greatest Show on Dirt.” The advance ticket combo is on sale now for $35.

Billed as The Great Northern Tour, the three-race stretch is a crucial series of races as the focus on the series championship becomes intense as summer draws to a close. The event at River Cities will be the third time this season the Outlaws have competed in Grand Forks, where earlier this season on the bullring Craig Dollansky looked invincible as he swept the weekend.

Huset’s Speedway was originally scheduled to host the Outlaws on Sunday, June 26, until rain forced its postponement. A favorite of many drivers, Huset’s always generates exciting action with many of the biggest names in the sport competing.

The event on Tuesday, Aug. 23, at Black Hills Speedway — Thunder in the Hills — will be a bit of a throwback race. The last time the series competed at Black Hills was in 2007 on a 3/8-mile, which no longer exists. Extensive work has returned the speedway to its historic half-mile shape where drivers like Doug Wolfgang once battled the touring invaders. Ironically, Donny Schatz, whose boyhood hero was Wolfgang, has won the last two World of Outlaws events at Black Hills.

From South Dakota the Great Northern Tour will cross the border and head Aug. 26-27 to Edmonton and Castrol Raceway, where Jason Meyers and Joey Saldana earned victories during the Oil City Cup weekend en route to one of the closest championship battles in series history.

To learn more about the World of Outlaws Sprint Car Series, click WorldofOutlaws.com.