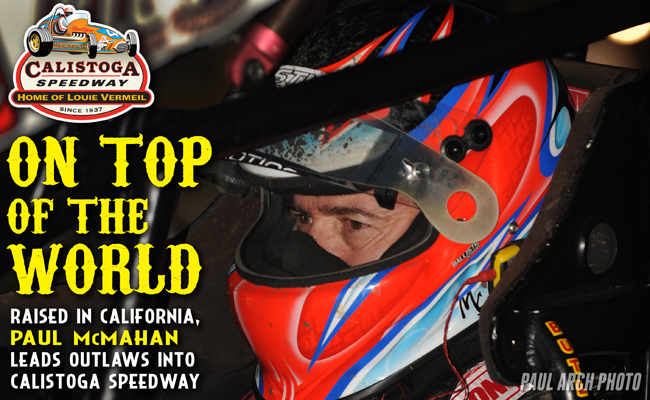 World of Outlaws STP Sprint Car Series Star Paul McMahan was Raised on Dirt Tracks in California, Now He Leads ‘The Greatest Show on Dirt’ This Weekend Into Calistoga Speedway

CALISTOGA, Calif. — April 1, 2014 — Paul McMahan was a 7-year-old quarter-midget racer in California when Steve Kinser, Rick Ferkel and the World of Outlaws first came to town in 1978. Flash forward to 2014 and that kid is now on top of the world, or to be more precise, the World of Outlaws STP Sprint Car Series.

Sure, he’s moved away, got married, has a couple of kids, but make no mistake, returning Saturday and Sunday to Calistoga Speedway as the World of Outlaws STP Sprint Car Series points leader, even though it’s only 10 races into the biggest schedule in motorsports, definitely is not lost on the personable McMahan.

“Back in 1978 when the Outlaws first came to West Capital Raceway, I was 7 years old and got to drive my quarter midget around the track during the national anthem,” said McMahan, who earned the 1995 Calistoga Speedway championship. “That was the time when I said that’s what I want to do, race with the World of Outlaws. As a kid you think about it all the time but you don’t think it’ll actually happen. To have that opportunity actually happen is phenomenal in itself, but to be leading the Outlaw points in your home state with all the fans that I grew up around is pretty cool.”

It gets better. McMahan, a national champion quarter-midget racer from Elk Grove, Calif., not only got to be part of the show in 1978 at West Capital Raceway, but spent the day after the event hanging out with Kinser and Ferkel at a barbeque, solidifying his career path before he was even in the third grade.

Now residing in suburban Nashville, Tenn., McMahan is in the envious position of sitting atop the point standings over past champions like Daryn Pittman, Donny Schatz, Steve Kinser and Sammy Swindell.

“It’s always cool to be on top of the points,” McMahan admitted before cautiously adding, “It’s way too early to be thinking about that now, though. It’s the first time I’ve led World of Outlaws points. To be there is a good spot, but it’s a long road ahead of us.”

The World of Outlaws STP Sprint Cars race this weekend in Calistoga, a track that certainly plays into McMahan’s hand as a previous track champion. He has become a focal point of fan and competitor attention over the past few weeks the series has raced on the West Coast.

“Everyone talks about it, all the owners I’ve driven for in California, they’re very proud of what I’ve done in my career, but it’d be a lot more special coming back in September if I’ve still got the point lead and it’s a lot more than nine points.

“It’s way too early to think about points, we’re only 10 races into the season and we’ve got 80 races to go,” McMahan said, while admitting it’s nearly impossible to forget the championship standings. “You’ve got plenty of people who remind you about it through the day through social media.”

For now McMahan and his CJB Motorsports team are staying focused on qualifying and winning races. After all, he’s come a long way since that night in 1978.

For tickets to see McMahan and the Outlaws this weekend at Calistoga Speedway, call the ticket hotline at 877-395-8606 or click www.WorldofOutlaws.com/tickets.

WHAT TO WATCH FOR: World of Outlaws Sprint Cars Make Return to New York