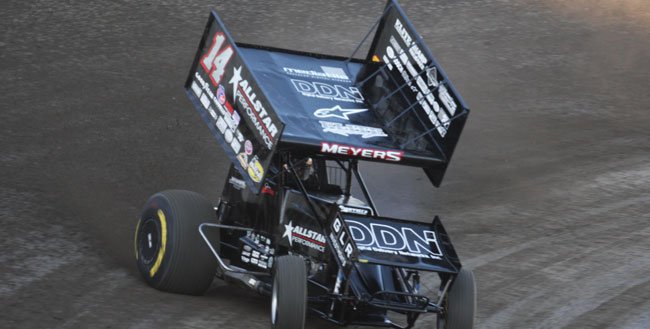 CHICO, Calif. — SEPTEMBER 8, 2011 — For over half a century, Sprint Cars have converged in the Golden State of California to go wheel to wheel for pride, glory and a big pay day. On September 9th and 10th, Silver Dollar Speedway in Chico, Calif. will play host to the 58th annual Gold Cup Race of Champions. The event, which typically is considered one of the crown jewel events in Sprint Car racing, will mark the second time in 2011 that the World of Outlaws Sprint Car Series has visited the quarter mile bull ring and is a pivotal race in the final stretches of the season. (Steve Curtis photo.)

“The Gold Cup has for years been one of the biggest races in California and has always been a race that you wanted to put your name on,” explained 2010 World of Outlaws Sprint Car Champion and Gold Cup race winner Jason Meyers. It meant the world to myself and our entire team last year to add the Gold Cup to our list of accomplishments and we are looking forward to going for the repeat this year.”

Meyers, a native of Clovis, Calif. became just the 8th driver in series history to claim the series title in an exciting point’s battle between himself and four time champion Donny Schatz. Meyers currently holds the point lead over Schatz and recently picked up his fourth win of 2011 at Castrol Raceway in Edmonton, Alb. Can. Schatz has been on a tear since winning the 51st Goodyear Knoxville Nationals and is looking to play the role of spoiler as the Outlaws head to Meyer’s home turf. Sitting in third is the 20-time Champion and 12 time Gold Cup race winner, Steve Kinser. The Bloomington, Ind. native is beginning to pick up momentum as he tries to capture an unprecedented 21st title. Fourth in the points standings is California native Paul McMahan.

“Gold Cup would be awesome to win,” said McMahan, who now resides in Nashville, Tenn. “The format is a little bit different with it being a two day show. I’ve been going to Gold Cup since 1978 and it’s race I’ve always wanted to win. It would be a dream come true.”

Rounding out the top-5 in points is the spring winner at Silver Dollar Raceway, Craig Dollansky. The Elk River, Minn. native had the car to beat in March and leads the series with eight wins on the season. The Outlaws will take their ever tightening points battle into Silver Dollar Speedway with bragging rights for the year. For more information or to purchase tickets, visit www.SilverDollarSpeedway.com