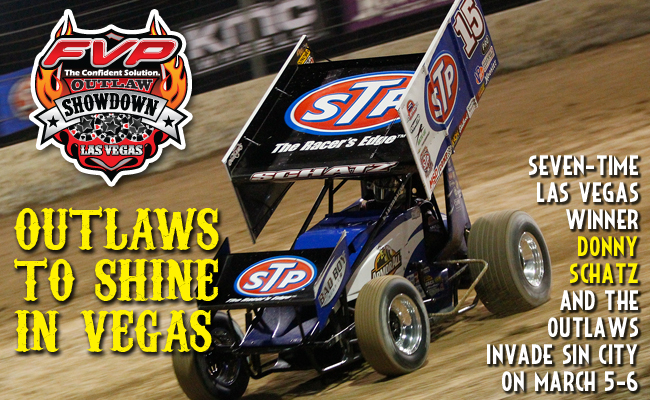 CONCORD, N.C. – Jan. 24, 2014 – The bright lights of Las Vegas will shine on the World of Outlaws STP Sprint Car Series when it invades one of the biggest entertainment cities on the planet for the two-night FVP Outlaw Showdown March 5-6 at The Dirt Track at Las Vegas Motor Speedway.

FVP and the World of Outlaws STP Sprint Cars will get top billing at Las Vegas Motor Speedway on Wednesday and Thursday during the city’s biggest racing week of the year. Tony Stewart Racing’s Donny Schatz is a seven-time winner at Las Vegas but Daryn Pittman of Kasey Kahne Racing will be seeking a victory to help him defend his series championship.

In addition, the FVP Outlaw Showdown will mark the final time the legendary Steve Kinser will be competing for a World of Outlaws STP Sprint Car Series crown during his “Salute to the King” season at the Las Vegas dirt track. Kinser is a 20-time champion who has earned four of his 576 career victories at the half-mile speedway just north of The Strip.

FVP, a leading provider of OE-quality aftermarket automotive parts, is title sponsor of the event and excited to join the fans for an incredible event.

“FVP has long been involved in sprint car racing and we’re pleased to partner with the World of Outlaws STP Sprint Cars at a world-class facility like Las Vegas,” FVP’s Joel Quetschenbach said. “The FVP Outlaw Showdown is going to be a huge two days in the country’s most electric city.”

Grandstands are scheduled to open at 5 p.m. with qualifying events at 6:15 p.m. and opening ceremonies at 7:30 p.m.

Tickets can be ordered online by clicking www.WorldofOutlaws.com/tickets or by calling 877-395-8606.

WHAT TO WATCH FOR: $50K on the line at the Prairie Dirt Classic