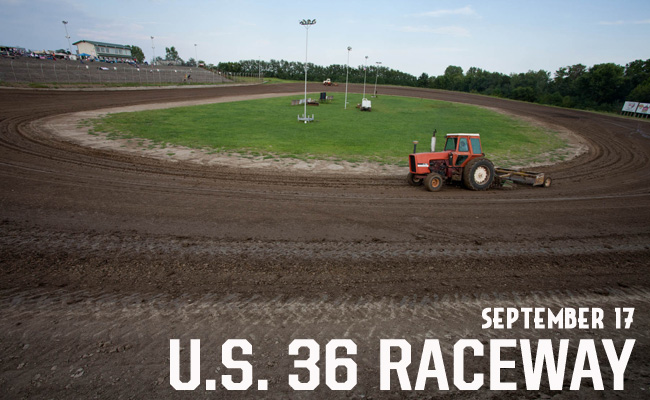 ‘The Greatest Show on Dirt’ marks their return to U.S. 36 Raceway on September 17 for the first time since 2009

The 0.375-clay oval of U.S. 36 Raceway features High Banks, High Speed and a High Trophy. “Big Bertha” has become one of the most sought after trophies in Dirt Track Racing, measuring in at a staggering six-feet, three-inches tall, all capped with a cup that is 12-inches in diameter. The trophy stands taller than most of the drivers trying to capture it.

The 2016 FVP Missouri High-Banked Nationals will mark the Outlaws’ return to U.S. 36 Raceway for the first time since 2009 when Joey Saldana captured the victory in thrilling fashion over Johnny Herrera after leading only three laps, with one of those laps being the most important lap – the last lap. Also up for bragging rights is the chance to lower the already blistering-quick sub-10-second track record of 9.846-seconds averaging 120.658-MPH, established by Paul McMahan in May of 2006.

“We continue to be excited to showcase FVP to great World of Outlaws fans at these premier events throughout the United States,” said FVP Marketing Manager Amber Misunas. “We are thrilled to part of the Outlaws return to U.S. 36 Raceway and all the excitement that is sure to come with this great event.” Built on a commitment to quality and delivered with unmatched service, FVP products are specifically engineered to provide OE quality that is equal or superior in performance to national brands at a competitive price.

Donny Schatz, the reigning World of Outlaws Craftsman Sprint Car Series enters the FVP Missouri High-Banked Nationals atop the championships standings on the strength of the four of the last six series wins at the helm of the Tony Stewart Racing No. 15 machine. Will Schatz be able to put a check in the win column at a track he’s never won at before or will Missouri’s own hometown heroes, Brian Brown and Danny Lasoski or the rest of the Outlaws be able to steal the victory?