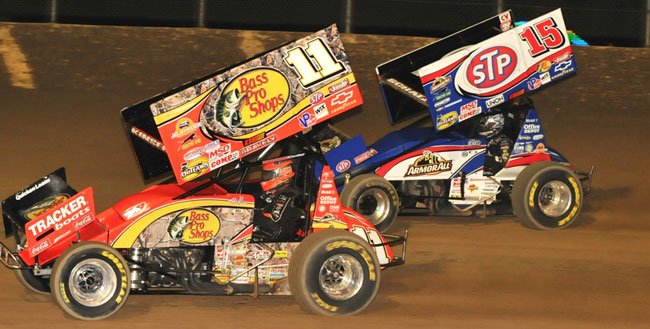 The sixth edition of the prestigious event, which also features the World of Outlaws Late Model Series and the Big-Block Modifieds from the Super DIRTcar Series, concludes the season Nov. 1-3 at The Dirt Track at Charlotte.

“It’s really a fun event,” Steve Kinser said. “You get to watch a lot of good racing and a lot of different divisions, so it’s fun for the competitors along with the race fans.”

While Kinser – a 20-time champion and the winningest driver – is on pace to wrap up his unprecedented 31st top-five finish in the standings, his Tony Stewart Racing teammate Donny Schatz is set to earn his fifth career championship and his first since claiming four straight from 2006-09.

Schatz is riding a hot streak of eight wins, 20 podiums and 24 top fives in the last 27 points events to hold a 176-point advantage entering the final weekend at The Dirt Track at Charlotte, where he swept the PEAK Motor Oil World Finals Presented by NAPA last season.

“When you take some of the greatest racers in the country and everybody’s excitement throughout the year and someone winning a championship and all this stuff coming down to one weekend, that’s what makes an event like that what it is,” Schatz said.

Adding to the excitement is that the Saturday finale on Nov. 3 will be broadcast on SPEED, beginning at 8 p.m. (Eastern). It is the fifth televised race of the season and the second event for the World of Outlaws at The Dirt Track at Charlotte.

“Definitely live on SPEED, it’s big for the sponsors,” said Joey Saldana, who claimed the other event at The Dirt Track at Charlotte this season.

“You always want to go in there and have a good showing, and definitely want to go into the winter with something positive.”

Tickets can be ordered online by clicking CharlotteMotorSpeedway.com or by calling 800-455-3267.