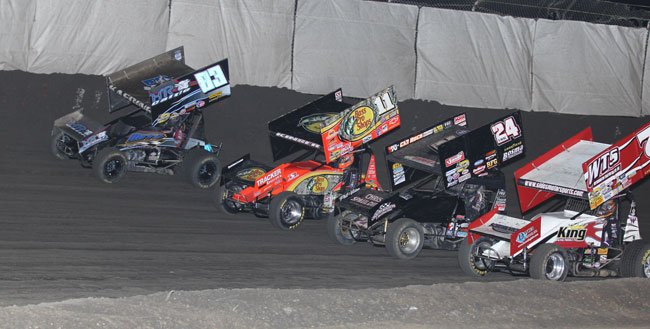 CHICO, Calif. — March 20, 2012 — At least one World of Outlaws feature has been held at historic Silver Dollar Speedway since 1979.

There are five scheduled races this year beginning with the Mini Gold Cup this Friday and Saturday at the high-banked, quarter-mile track on the Silver Dollar Fairgrounds.

Here are some quotes about the facility, the competition and the event from the full-time World of Outlaws drivers:

Cody Darrah (Red Lion, Penn.) – “It’s absolutely one of the biggest races in California. It’s exciting to go there. It’s a great event, great fan base. It kind of reminds me of what we have back home with how well the fans turn out and what kind of an atmosphere it is.”

Craig Dollansky (Elk River, Minn.) – “It’s a fun, little race track. Things happen in a quick hurry. When that track is prepared the way it needs to be it can put on a great show for the fans.”

Steve Kinser (Bloomington, Ind.) – “It’s short-track racing so you never know what you’re going to do. The fans seem to like it. A lot of the local guys run pretty good. You’ve got race teams that seem to run short tracks better and those are the guys who are going to shine there.”

Kerry Madsen (St. Marys, New South Wales, Australia) – “It’s definitely something we look forward to. Hopefully we’ll have a good run and get a solid foundation for when we come back in September (for the Gold Cup). We can go there and it can be heavy rough or it can be dry slick. So I think adaptability is the key.”

Bill Rose (Plainfield, Ind.) – “We actually won a nonwing race up there last year. It’s just a good, little racy place. It kind of reminds me of Bloomington back home. It usually stays heavy and stuff like that, and you get a lot of wheel-to-wheel racing.”

Joey Saldana (Brownsburg, Ind.) – “It’s just a bullring and it’s just a racy little place. You just have to hustle your car the whole race. It’s pretty demanding. You just can’t give up on your car and keep digging.”

Donny Schatz (Minot, N.D.) – “It’s a facility that’s got probably the most history behind it. They’ve done a lot more racing there than all the other places (on this current World of Outlaws swing in California).”

Sammy Swindell (Germantown, Tenn.) – “Out here most of these are smaller or heavier or bumpier tracks than what we usually get back East, so it’s different.”

Lucas Wolfe (Mechanicsburg, Penn.) – “It’s always a tough track because there’s a lot of good locals. They all seem to run pretty well there and we sometimes have a tough time there as travelers coming into a tough local area.”

For live updates on this weekend’s races and more information on the World of Outlaws, visit WorldofOutlaws.com.