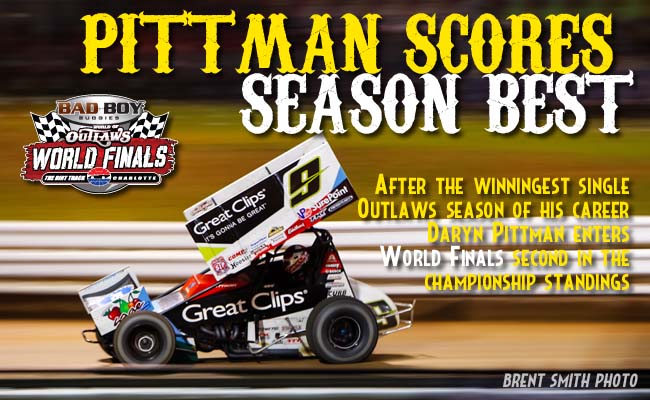 The team’s first win of the season came at Thunderbowl Raceway where Pittman battled with rookie Logan Schuchart to take the checkered flag.

As the season wore on, Pittman and crew members Kolton Gouse, Mike Carber and Kale Kahne operated with the consistency of a defending championship winning team.

When the series entered Central Pennsylvania in May, battling for the Morgan Cup title, Pittman hit his stride – winning both nights at Williams Grove and keeping the Morgan Cup in Outlaw hands.

“It doesn’t get any better than that,” Pittman said in victory lane. “I’m just speechless. This is a big weekend for this team. These guys, this is something they’ve dreamed about for a long time and I’m just a lucky guy to get to drive this thing.”

The run was not over. He went on to victories the following nights at Orange County Fair Speedway and New Egypt Speedway. When all was done, Pittman scored one of the longest winning streaks of the season.

When the Outlaws rode into Dodge City, Kan. in July, Pittman was poised for the gunfight to come.

The Owasso, Oklahoma-native held off Paul McMahan on night one and Kerry Madsen on night two. And just like the famous Dodge City lawman Wyatt Earp – Pittman cleaned up Dodge City sweeping both nights of the Boothill Showdown.

“I kind of love Dodge City – this place has been really nice to me,” Pittman said.

Further success came at Lincoln Speedway and a triumphant win at River Cities Speedway – a place Pittman had historically struggled at.

2014 will go in the record books as the winningest single Outlaws season for Daryn Pittman – the first time he has cracked double digits.

As Pittman and his Kasey Kahne Racing with Mike Curb team head into the Bad Boy Buggies World of Outlaws World Finals, they have compiled nearly 50 top-five finishes and more than 70 top-ten finishes, and a second place perch in the World of Outlaws STP Sprint Car Series championship standings.