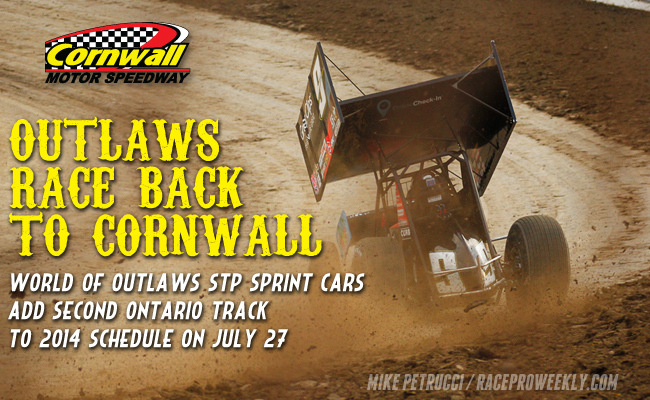 CONCORD, N.C. – Jan. 22, 2014 – The World of Outlaws STP Sprint Car Series’ 2014 schedule continues to grow with the addition of Cornwall Motor Speedway to the tour on Sunday, July 27.

This will mark the second time the World of Outlaws STP Sprint Car Series has invaded the quarter-mile oval in Cornwall, Ontario, Canada, where five-time series champion, Donny Schatz, won on July 29, 2012.

Ticket information for the event can be found at www.slspromotions.com.

The World of Outlaws makes its first stop of the 2014 season in Canada on July 26 at Autodrome Drummond near Montreal. The series then moves into Ontario for Cornwall Motor Speedway’s event on July 27 and caps off the swing on July 29 at Ontario’s Ohsweken Speedway.

This swing through the Northeast will also mark the only chance World of Outlaws STP Sprint Car Series fans in Quebec and Ontario will have to see Steve Kinser during his “Salute to the King” tour as he chases his 21st series championship.