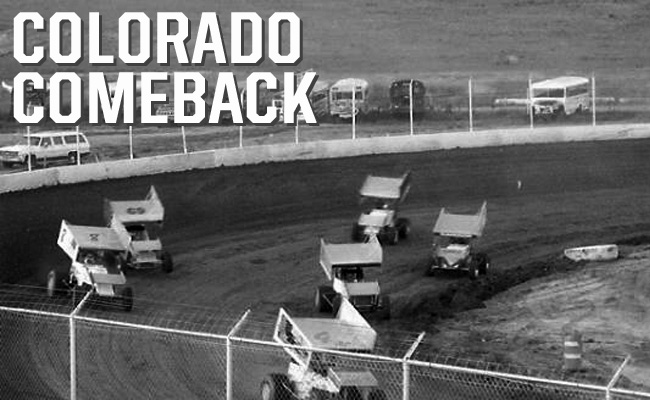 The event will be the Outlaws’ first time in Colorado since 2005, and the first-ever appearance at the semi-banked quarter-mile track.

“We are excited to join BST Racing for this great event and the opportunity to see the Outlaws take on El Paso County Raceway,” said World Racing Group CEO Brian Carter. “It’s been a long time since we’ve been in Colorado, and we’re excited to bring 410 sprint cars back to them.”

“It has been five years of blood, sweat and tears getting the World of Outlaw show back to Colorado,” said Raceway Manager and BST Racing Promoter Joe Bellm.  “It is nice to see that hard work finally come together for a September 14th World of Outlaws Show at the El Paso County Raceway in Calhan, Colorado!”

While 410 sprint car racing has been absent from the track in recent years, several local standouts are expected to make a play against the Outlaws, including local driver Jeff Heffner (a Knoxville 360 regular) and Justin Wolf Medlock (an ASCS local). Jeremy McCune, from Billings, Mont., has committed to going and is bringing up to four other cars with him. And word has it a couple of cars are coming from Wyoming as well.

The Rocky Mountain Midget Racing Association began in 1940, and is the second oldest midget racing club in the country. Based out of Colorado, the RMMRA has a long standing fan base, history, and deep roots in open wheel competition allowing them to experience the evolution of midget racing.

“We are honored to run in support of the World of Outlaws and BST Promotions as they make their return to Colorado,” said RMMRA President Chris Sheil. “It is nice to see Mr Bellm’s hard work prevail in getting this show to reality here in Colorado. I know he has been working on it for some time now. And our great car count is due to all of his organization with the Colorado Dirt Track Alliance he put together. I can not say enough about the continued improvements Joe has done with El Paso County Raceway. It has truly become the greatest venue to race at in Colorado.”

The Rocky Mountain Lightning Sprints is an association formed in 2011 by the merging of the RMMSA and COMSA to manage the 1000cc motorcycle-based winged and non winged open wheel division in Colorado and western Kansas. These cars use a midget chassis, powered by 1000-1200cc motorcycle engines. These are a great class for those drivers that later may want to race Midgets and Sprint cars.

“We race at several tracks in Colorado and Western Kansas, and were honored to be the support class,” said RMLSA President Steve Becker. “El Paso County raceway is our home track, and we are excited to race at this improved facility operated by BST Promotions. With the continued support of our great car owners and drivers, as well as our local track promoters, we have had great car counts often exceeding 20 cars per night.”

Race Central Television and Radio host Kurt Hansen – synonymous with all forms of local, national and international motor sports, and BST Racing’s Official Dirt Track Announcer for all Colorado and BST Races – will share his usual post in the Tower with World of Outlaws Craftsman Sprint Car Series announcer Johnny Gibson for this epic event.

“Kurt’s edgy attitude and extensive racing knowledge will certainly bring a spark, energy, and angle never heard before at this event or any other,” said Bellm. “It is no doubt that Kurt’s enthusiasm and passion certainly made him our first choice for this Fall Classic not-to-be-missed Show.”

Hansen and Bellm are expecting many gearhead fans to come out and see all Stars and Cars of the “The Greatest Show on Dirt.”

“A lot of people are excited. This is definitely going to be a big show,” said Bellm. “We would like to thank El Paso County for their commitment in making the World of Outlaw show happen with the facility and track improvements.  In addition, we want to thank them for their continued dedication to making El Paso County Raceway an excellent venue to race.”