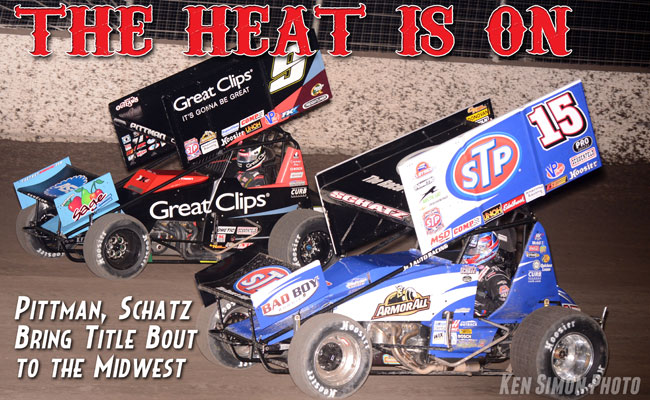 SPENCER, Iowa – Sept. 11, 2013 – For the past four years, Daryn Pittman was competing throughout Central Pennsylvania against some of the toughest sprint car racers in the country. Now, he’s on top of the world. The World of Outlaws STP Sprint Car Series, that is.

Kasey Kahne picked Pittman, a native of Owasso, Okla., to drive his #9 Great Clips car this season and Pittman has not disappointed. He won the opening night of the season in February at Volusia Speedway Park and has led the championship standings ever since. Neither Pittman nor Kahne has ever won a World of Outlaws STP Sprint Car title, and heading into this weekend on Friday at the Clay County Fair Speedway and Saturday at Deer Creek Speedway he has a 66-point lead over Donny Schatz.

Schatz, of Fargo, N.D., who drives the Tony Stewart Racing STP/Armor All car, is doing all he can to chase down Pittman and win his sixth World of Outlaws STP Sprint Car Series championship. Nobody has been hotter this season than Schatz, who already has tied his single-season career high for victories at 19, including his seventh Knoxville Nationals title.

With only 10 races left in the season, the championship battle will be front and center this weekend and Schatz is primed to make some noise. The Outlaws have raced seven times at Clay County and Schatz has won three of those races, including last fall. Pittman has raced only twice at Clay County (2007 and 2008) with a best finish of 17th.

The bigger challenge for Pittman could come on Saturday at Deer Creek. Pittman has never competed in a World of Outlaws STP Sprint Car Series event at the track in Spring Valley, Minn., while Schatz has finished second three times and fourth once.

The only driver to win at both venues is Craig Dollansky, of Elk River, Minn., who is no doubt excited to be racing in the upper Midwest for the first time in several weeks.

As Schatz has the most World of Outlaws STP Sprint Car Series wins at Clay County, Joey Saldana leads the way at Deer Creek, where he earned victories in 2009 and 2010. Saldana has been a championship contender all year after forming a new team with Minnesotan Dan Motter this season. Saldana and the Motter Motorsports team earned their first victory on Friday night in a sign that things are beginning to click for the new team.

No matter where the Outlaws race, there are always two drivers who can never be counted out, Steve Kinser and Sammy Swindell, the top two all-time winners in World of Outlaws STP Sprint Car Series history. Kinser counts among his 576 career victories a 2011 win at Deer Creek, but neither driver has won at Clay County.

On-track activity is slated to begin at 6:45 p.m. on Friday night at Clay County and 6:30 p.m. on Saturday at Deer Creek.