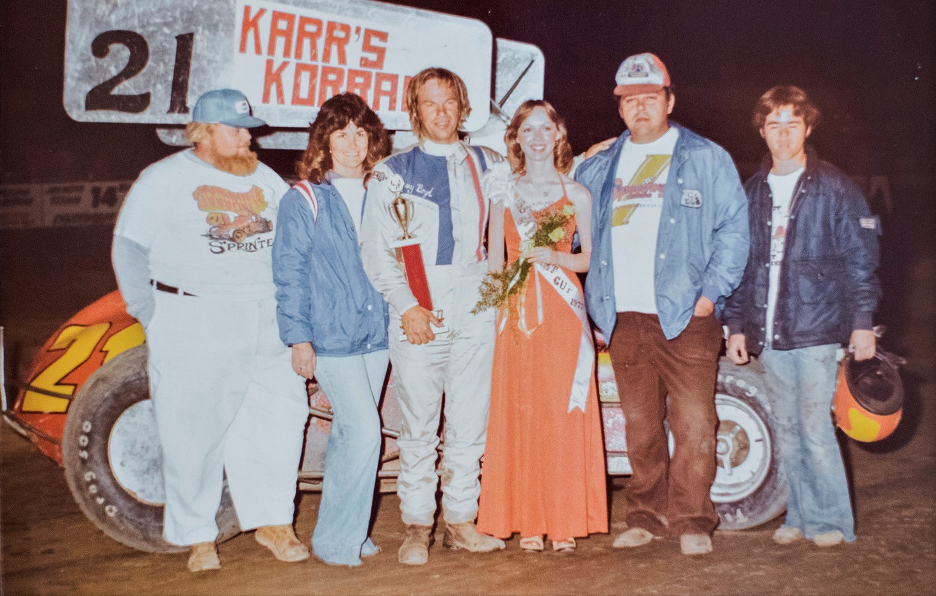 Kenneth Keith Woodruff was born in Fort Dodge, Iowa on November 11, 1940. At age 19, he came to Sacramento, CA. By day, he repaired cars for neighbors. By night, he tinkered on race cars. West Capital Speedway was booming with sledgehammer square tails but Woodruff wanted a stallion. He wanted a sprint car and wanted one from Iowa. Bob Trostle torched it together and Woodruff hauled it to Washington where Jan Opperman won the Dirt Cup of 1975. Strolling to Sky Valley’s victory lane was way better than toiling on grandma’s Buick. To win with the high priest of the outlaw movement turned the shop owner to gypsy.

Woodruff’s new formula seemed simple: put the best driver in the fastest car to net the biggest prize. All too soon he learned that success would never be as simple as unleashing Opperman on a bay full of fishermen. Still he forged a basic geographic pattern from El Centro desert to Pacific Northwest to the Iowa homestead in those busy weeks surrounding Knoxville Nationals. When the World of Outlaws began, Ted Johnson’s first schedule lightly traced the migratory path of Woodruff and Jimmy Boyd. Ted’s first Outlaw uprising was a three-night program at the Devil’s Bowl in Mesquite, Texas where the last men standing were Ken and Jim. The point leaders were offered 500 bucks by Eldora’s Earl Baltes to tow into Ohio. For the next two decades, Woodruff was an integral cog in the World of Outlaws.

He owned the cars. He prepared them to the last nuts and bolts. He hired the help. They rolled cars into pristine metal boxes, strapped tires to the floor and hauled stone-chipped carcasses across America, Canada and once to Mexico. With the team he turned into champions, Woodruff would eat more highway miles in less time than any rival rig. As sprint car power source, Casey Luna Fords could be cement shoes. But that truck got Woody from Billings to Bellingham in phenomenal time.

From an array of aircraft carriers emerged weaponry welded by Don Tognotti, Gambler, J&J and Maxim. Woodruff won with them all. Gambler’s first factory car was Kenny’s responsibility and briefly made him car owner again. His drivers were the very best: Doug Wolfgang, Steve Kinser, Sammy Swindell, Dave Blaney, Donny Schatz, Bobby Davis Jr. He played papa bear to a den of cubs who grew to crew chief status. Ask them of their mentor and most smile yet offer few anecdotes because Kenny could ride for hours without a word. He was not the loud guy at the bar after a rainout. His wife was always alongside. Anita was as good with a skillet as husband with socket wrenches and her food kept him fat and happy. Ken taught his son Jeff to field one of Knoxville’s strongest Saturday Night specials.

Woodruff’s fighter pilots progressed from Mike Andreetta and Garry Rush in 1974-75 to Lem Tolliver and Lee Osborne at the 1978 Knoxville Nationals that ended Boyd’s three years. Ken replaced Jim with Johnny Anderson then turned Tim Green into a rookie for the ages. He hired Rendy Boldrini, Danny Smith, Jac Haudenschild, Bob Kinser, Jack Hewitt, Brad Doty, Jeff Swindell and Smith again. Kenny came home to help Ed Watson’s drivers Darrell Hanestad and Rick Ferkel before joining Luna for ten years. Casey sold Fords and served as New Mexico’s lieutenant governor. Their first drivers were Ron Shuman, Johnny Herrera, Smith again, Shane Carson and Lealand McSpadden. Lee Brewer was a fast fiance to Woodruff’s daughter Tammy yet Kenny fired him one month into the ‘88 season. Jeff got the job until Davis struck gold. Bobby and Kenny had nearly been Outlaw champions in ‘84-85 even if “nearly” was well behind Kinser. Despite the Ford ballast, their reunion reaped the 1989 throne vacated by Kinser.

Woodruff was felled by a heart attack in 1991. It happened at the Big H Motor Speedway in Houston, Texas where heart surgeons were minutes away. Three arteries were 80 percent clogged to require a triple bypass. Casey refused to race without him. Two months later, Woodruff was back on the mule with rookie Danny Lasoski, who lasted a year before he and Haud swapped rides. Luna and Woodruff enjoyed their last four campaigns with Lou Blaney’s oldest boy. But when asked to accept Dave’s brother Dale as driver, Kenny’s grouchy side flared. Family is important but a good crew chief is not to be lost. Dave fired Dale and gave Kevin Gobrecht an Amoco job until Kevin died in their car in a horror that Kenny dodged for decades. He built a shop in South Tulsa and helped local kid Daryn Pittman. Woodruff then acted as Bear Bryant to his new recruit from North Dakota by instilling Donny Schatz with a champion’s attitude that victory is just your job. Kenny’s last Outlaw boss was Dennis Roth in 2003 when their driver was Sammy Swindell.

The largest checks were $100,000 from the Historical Big One at Eldora. Woodruff won four of those with four drivers. Eldora’s previous top prize paid $50,000 at Kings Royal. Kenny hoisted three such ceptors ever reluctant to share the stage. Woodruff won three Western World Championships, three Dirt Cups, two Syracuse Super Nationals and two Jayhawk Nationals. He nailed Knoxville Nationals in ‘97, National Open at Williams Grove in 2000, Florida Winter Nationals in ‘85, Jackson Nationals in ‘84 and harvested 1987 Cotton Classic and the 1991 Wheat Shocker. He added the Mini Gold Cup of 1990 though his hometown Gold Cup strangely eluded him.

Mechanics judge each other by how often their cars qualify quickest and how many times those cars fail before the finish. Regarding the former, Woodruff’s numbers were held down by heavy Fords in an era with no weight limit. In pre-Luna seasons, he wrote El Centro’s eternal standard with Boyd, lowered Sedalia’s mark with Green, established a World Record at I-70 with Wolfgang, and reached new speeds at Talladega and Baylands with Davis Jr. Luna Fords did forge one-lap marks from Firebird to Kokomo. As for maintenance, Woodruff was the gold standard. During the 1989 title run, Casey’s car finished 99 of 109 races among the Top 15 and 23 of those in victory lane: most by any Woodruff wheelman. Casey made Kenny the first Outlaw crew chief to earn a thousand dollars per week.

The day when Ken Woodruff sidled up to ask, “Hey bud. How ya barred up?” was the day that mechanic matured from pretender to contender because K-Dub did not inquire which torsion bars were favored by tenth-place technicians. He only asked those capable of beating him.

Woodruff was inducted into the National Sprint Car Hall of Fame in 2005. He died last week of amyotrophic lateral sclerosis or ALS. It is sadly ironic that Kenny Woodruff succumbed to Lou Gehrig’s disease since they were “The Iron Horse” of their sport. Lou started more consecutive major league baseball games than anyone for 59 years. For 17 straight seasons, Gehrig played first base for the New York Yankees. And for 16 years in the major league sprint car circuit called the World of Outlaws, Kenny Woodruff was forever on first base. May there be a truck stop in the ever after.