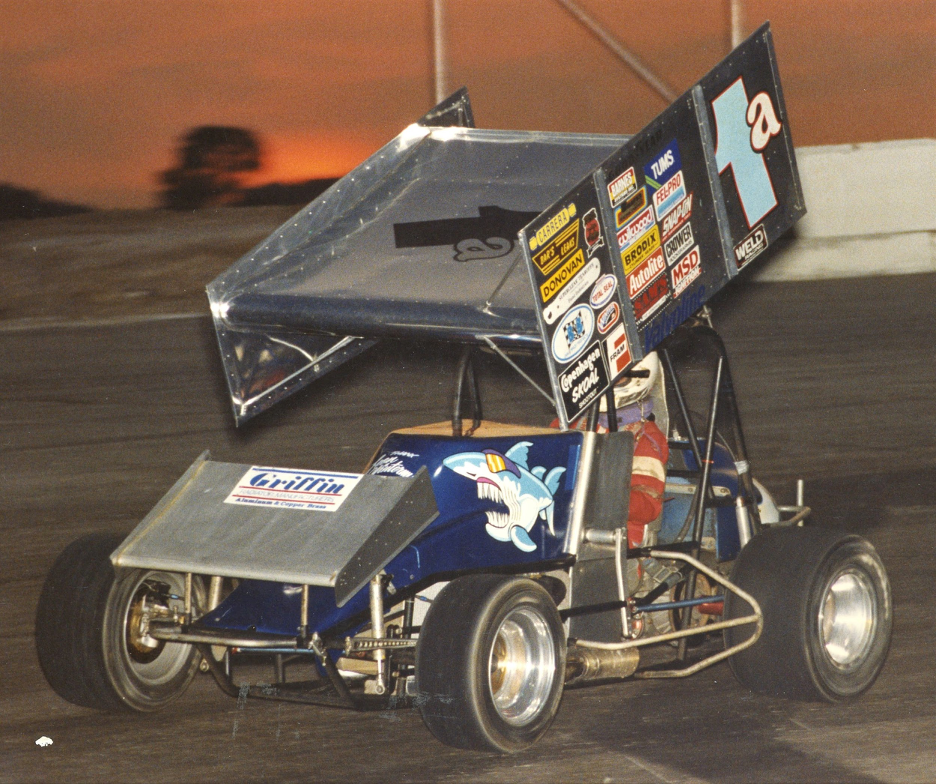 “Original Outlaw” is no token term. Originally, auto racing outlaws were those without membership in the austere Automobile Association of America and by proxy, no honest shot at the Indianapolis 500. AAA became USAC in 1956. Rear engines replaced roadsters and sprint car drivers were as welcome as rain. Sprint cars were no longer stepping stones but vehicles to very good wages provided their pilots could break free of USAC shackles to race 100 times per year.

Florida’s Bobby Allen bought into that Brickyard dream. How could it be otherwise for a World Karting Association phenom backed by 1960 Indy 500 winner Jim Rathmann? Bob burst out of Miami in 1966 to establish residence in and around Hanover, PA. Emerging as champion of Lincoln Speedway three times in four years helped convince Roy Emrich to underwrite a 1971 USAC effort complete with turbocharged Indy car. But after two dismal months, Bob was back at Lincoln and Williams Grove with calculated strikes into Ohio. USAC’s loss was a boon to fans from West Sacramento to East Alabama.

“Original Outlaw” absolutely applies. When the first All Star Circuit of Champions kicked off in 1970, he won in Wayne County. When the World of Outlaws began in 1978, he won at Eldora. When the All Stars reformed as the Midwest Outlaw Sprint Series in 1980, he became its first champ. To the end of his Hall of Fame career in 1998, Bobby Allen overlapped Outlaw and All Star calendars. When the former toured Central PA or New York, he was there. When the latter held Ohio Speed Week, he rushed overnight from Nebraska. No circuit owned Bobby Allen. He drifted in and out of them all leaving a trail of shattered track records in his merry wake.

Speed Week 1984 provided a quintessential Allen exercise. Qualifying was underway when Bob’s blue circus wagon arrived at Sharon Speedway. As a courtesy, All Stars halted the session to allow Allen across the track. He was granted two hot laps then one on the watch, which was faster than anybody. In the A-main, Allen sat third until a late red flag enabled him to reduce tire stagger by one inch. In the final seven circuits, he put a straightaway on Keith Kauffman and won going away.

He was completely honest with himself. Most winners simply glanced at the top prize and acted accordingly. Allen evaluated everything: his strength on a specific speedway, how many fast cars might challenge, entry fee versus starting money, starting spots, etc. Highway time was seldom a factor because Bob would tow twice as far to make twice as much, such as 1983 when he skipped Sharon to win 12k in Martin, MI. Other times, he might stop and snatch a thousand bucks on his way to a richer payday.

Of all American road dogs, Allen embraced the traveling life. Maybe it was because he was unbound by point chases. Maybe it was his open marriage. Perhaps it was being his own boss. Bob built the cars, chose each component and crew, made every tire selection. Of course as CEO, he had to cover all expenses, which brought pressure that hired guns never knew. But he rarely showed stress. Bob’s mantra became, “Pay yesterday’s bills with tomorrow’s winnings.” He was without pretense. When he stopped shaving his face, Emrich teammate Lynn Paxton coined him “Scruffy” and the nickname stuck. Dick Tobias and Allen flew to Phoenix when Bob’s luggage was one pillowcase.

Adorned with stone chips, Allen 1-A parked in no fewer than 293 win circles on 66 tracks in 21 states. Bob settled for second at 38 more places. He raced on at least 208 ovals, only five of which were paved. He broke one-lap records 75 times on 48 tracks. He won from Knoxville to Jacksonville to Danville to Zanesville to St. Clairsville to Lernerville; Brownstown to Morgantown to Hagerstown; Beaumont to Fremont; I-30 to I-85; Devil’s Bowl to Cotton Boll; Jackson to Franklin to Lincoln.

Allen was quick to see the logic of two and three-car efforts. Shorty Emrich had been Paxton’s boss in 1968 before adding Scruff in ‘69. But rather than pit them against each other, Emrich allowed Paxton to plunder larger tracks up river at Port Royal or Selinsgrove. Upon returning from USAC, Allen fielded an Emrich Chevrolet for Jan Opperman. Emrich entered three Allen cars in the 1971 Williams Grove National Open. Over the winter when Opperman prepared to rewrite history with Dick Bogar and Ralph Heintzelman, they chose Bob the builder. One tool was a rod from cockpit to torsion stop that Opperman liked enough to jack weight on every Don Maxwell machine that he drove for Speedway Motors or Al Hamilton.

Bob’s first true teammate was brother Tommy Allen. One evening in 1972 concluded with Allen cars first, third and ninth. They all made the 1974 National Open 150. Leroy Emrich expired in 1975 to cause Bob to find financing from Jim Barill and Jasper Pettite of the M&J Coal Company in Morgantown, WV. Bob and Tom teamed for the 1976 National Open 150. Fourth at Lincoln aboard an Allen chassis of Mike Herbert was the highest finish in the tenuous career of Tommy Allen.

Also in that 1980 URC field was Bob and Tom’s kid brother Joey Allen, who had debuted with the World of Outlaws a year before. Named for their father, Joe raced when Bob could manage. In exchange for hiring his sibling, Bob built cars for Walt Dyer (‘86), Bob Lesko (‘87) and Verlin Chupp. All were parked in victory lane. Lesko lasted a few months so Allen assembled an A-1 in which Joey won 12k at the 1987 National Open 75. Ben Cook commissioned Bob to his V-6 on Ohio Speed Week 1989 so Allen double-dipped as car owner. He built another Dyer Masonry 461 for Joey to jockey to five wins in 1990. And when brother needed a summer job in 1992, Bob assembled the car that claimed Joey Allen’s only Outlaw victory at Attica, OH.

For three months of 1984, Allen Enterprises added Steve Stambaugh in 3-A. He had never raced west of Lernerville yet Bob took Steve to Houston to qualify quickest in his very first try. Sixth at Lonestar followed. When that car was sold to New Jersey’s Fred Kennedy, Stambaugh drove it to ninth with Outlaws at Lernerville. Steve won at Lincoln and Bedford (1987) in the Allen car lettered as Leppo 4-L.

Bobby Allen’s 1990 Knoxville Nationals was one of the most popular wins in sprint car history. It also marked his final victory in the World of Outlaws as driver. He last defeated the All Stars at Lernerville in 1996. His final checkered flag fell at Sharon Speedway. He made his final Outlaw start at I-55 in 1998 and retired one week later.

The World of Outlaws went without Bobby Allen for 16 seasons. During that period, Bob built Allen’s Kartway into a viable business. One of its resident pupils was Logan Schuchart, son of Doris and Bob’s daughter Dana. Grandpa began spending Saturdays at Hunterstown helping Logan learn the family trade. Sprint cars were a natural step as was life on the road. He echoed grandpa’s penchant for track records. He turned the fastest lap of the 2018 Knoxville Nationals and was last week’s top qualifier of both Dodge City sessions. Schuchart has amassed 21 Outlaw wins in seven campaigns.

Jacob Allen’s path to victory lane was long. Product of a 1993 trophy girl liaison, Jake lived in Indianapolis with mom. Only after completing high school did he decide to give racing a try. Unlike cousin Logan, he had no laps on a kart. He learned it all from scratch. When he went on tour, Jake had fewer laps than any Outlaw since Mark Kinser. But like that champion, Allen followed father’s command to be coached in person rather than by phone. Everyone with the World of Outlaws knew Bobby Allen would make an outstanding crew chief. Logan and Jake are living proof.

Allen Enterprises evolved to Shark Racing. Three decades earlier was when Jack Eckard drew wild eyes, slobbering tongue and shark’s teeth on Bob’s bare metal hood. A brand was born. In the dark days before Drydene greased their wheels, Logan and Jake seemed to be on tour just to double Bob’s tow money. Some survival tactics stifled driver development. Sometimes they shared a single engine. Other nights they were told to start and park. Drydene ended such penny-pinching. Logan Schuchart might make a champion of Bobby Allen for the first time in 40 years.