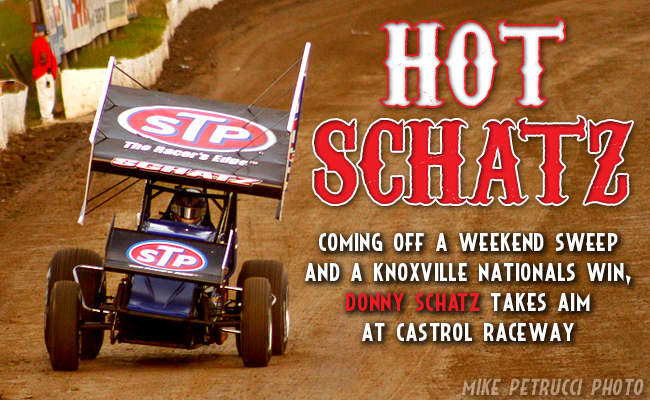 EDMONTON, Alberta – Aug. 20, 2013 – Tony Stewart Racing’s Donny Schatz was a winner on the first World of Outlaws STP Sprint Car Series weekend at Castrol Raceway in 2007, now he returns this weekend to the 7th Oil City Cup as the hottest driver in sprint car racing.

Just over a week ago Schatz wrapped up his seventh FVP Knoxville Nationals crown, and is coming off a weekend sweep of events in his native North Dakota. Never before has he reached 16 wins so quickly in his career, now Schatz is focused on trying to run down Kasey Kahne Racing’s Daryn Pittman, who has led the World of Outlaws STP Sprint Car Series championship since the opening night of the season.

Don’t expect the Kasey Kahne Racing crew to back down from the challenge. There have been 12 World of Outlaws STP Sprint Car Series events at Castrol since 2007, and KKR teams have won a quarter of them. In addition to Pittman, former Castrol winner Cody Darrah and 2013 Kings Royal winner Brad Sweet will be tackling the 3/8-mile oval trying to bring back a win for KKR.

Standing in the way of the Tony Stewart Racing and Kasey Kahne Racing teams might just be the Big Game Treestands duo of Craig Dollansky and Sammy Swindell. Both drivers split the World of Outlaws STP Sprint Car Series features last year and are eager to repeat their winning performances this Friday and Saturday.

The driver with the most Outlaw victories at Castrol is Joey Saldana, who has helped to relaunch the Motter Motorsports team this year and is in search of his first victory of the season. Saldana is chasing his fourth victory at Castrol.

Tony Stewart Racing’s Steve Kinser won the first World of Outlaws STP Sprint Car Series event in 2007 at Castrol, and he returns this year with renewed energy after winning last week in Nebraska and finishing second on Sunday night in North Dakota. Kinser is on his best run of the season and figures to be in the mix for another Castrol victory.

This weekend marks the Outlaws’ final trip to Canada this season. The series raced last month in Quebec and Ontario, with Schatz and Darrah earning the wins.