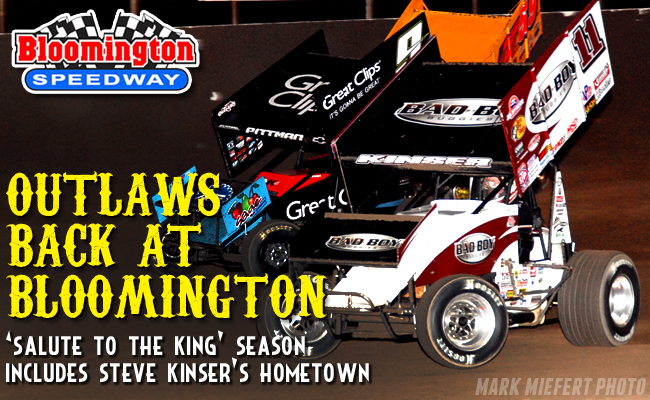 CONCORD, N.C. – Jan. 17, 2014 – It’s only fitting that during Steve Kinser’s “Salute to the King” season on the World of Outlaws STP Sprint Car Series circuit there will be an event at his hometown Bloomington (Ind.) Speedway.

Kinser won the inaugural World of Outlaws event at the quarter-mile dirt oval on Aug. 18, 1978, but that was just the beginning for King of the Outlaws. He went on to win another seven times at Bloomington, which has been host to 25 World of Outlaws STP Sprint Car Series events.

The race will be the series’ fifth trip of the season to the Hoosier State, a hot bed for short-track, open-wheel racing. The series also will race in Indiana May 10 at Tri-State Speedway in Haubstadt, May 26 at Lawrenceburg Speedway, June 4 at Kokomo Speedway and Sept. 17 at Terre Haute Action Track. Tim Kaeding won at Tri-State and Kokomo last season while Donny Schatz took the win at Lawrenceburg. The Outlaws are returning to Terre Haute for the first time since Joey Saldana won there in 2006.

The Outlaws last raced at Bloomington on Aug. 3, 2012, when Lucas Wolfe earned his first series victory. Steve Kinser’s eight World of Outlaws wins at Bloomington are the most in series history, while Sammy Swindell’s five wins are second-most.

Tickets are on sale beginning today by clicking www.WorldofOutlaws.com/tickets or calling 877-395-8606.