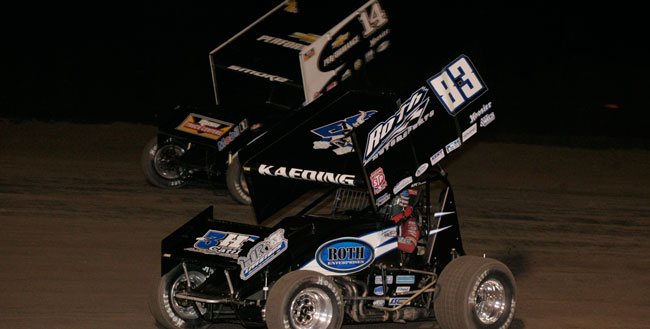 The first of two events at the 3/8-mile track is set for Friday, April 5

Californian Tim Kaeding’s slide job on World of Outlaws STP Sprint Car Series Champion Donny Schatz in the last turn on the final lap lit up Antioch Speedway last September and is the talk heading into this season’s spring event at the 3/8 mile on Friday, April 5.

“Obviously three guys going for the win there at the end was pretty neat for the fans,” Joey Saldana said. “Hopefully we’re involved in a chance to win that race and it can be as exciting as it was last year.”

It’s the first of two World of Outlaws STP Sprint Car Series races this season at the high-banked track. The other will be the final race of the season in California on Sunday, Sept. 8.

Steve Kinser also won a thriller in the inaugural event at Antioch Speedway in 2011. He passed Craig Dollansky in traffic with five laps remaining and held off NASCAR sensation Kyle Larson to claim the victory, which set the stage for exciting races at Antioch Speedway.

“That’s one of my favorite tracks on the West Coast,” Cody Darrah said. “It really forces you to pass and be in close-quarters racing. I’m really looking forward to going there.”

Kaeding, Kinser, Californian Jonathan Allard – who led led the first 28 of 30 laps last season – and Kraig Kinser are the only drivers with top-10 finishes in both events.