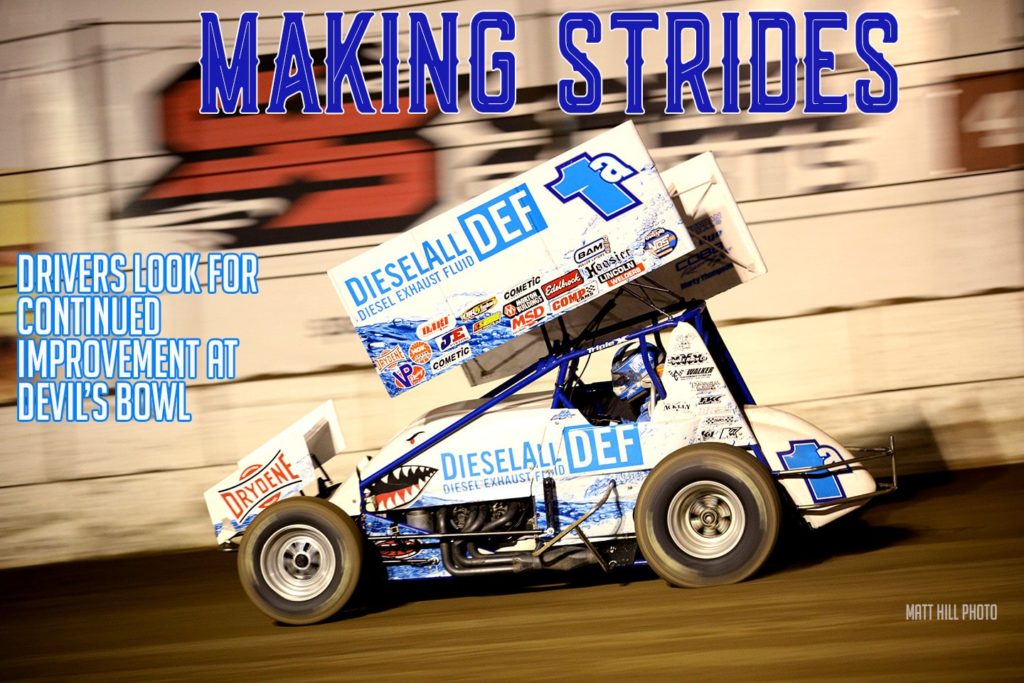 MESQUITE, TX – While Brad Sweet and David Gravel are carrying winning momentum into this weekend’s doubleheader at Devil’s Bowl Speedway, a few drivers are carrying the relieving momentum of getting their first top-10 of the year.

Before entering the Arizona races at USA Raceway and Arizona Speedway last weekend, Brent Marks had finished no better than 11th, Kraig Kinser 15th and Jacob Allen 21st. Kinser had also missed transferring to one Feature, Marks two and Allen three – in the first nine races of the season.

“I think things will start going our way,” Marks said, after claiming his first top-10 of the year.

The Myerstown, Pa., native is coming off of his best season, finishing ninth in points with three victories. He said his team has been working hard on the car each week to get it back to its competitive nature. Putting together a good race day starts with good time trial results, he said.

“It just worked out in our favor,” Kinser said, sweat drenched across his face after the Arizona Speedway Feature. “We’ve been working on our car about every week. Some big changes, some little changes.”

Kinser has 17 career wins, but has not won since 2017. He’s looking to carry and build momentum into Devil’s Bowl Speedway and beyond. It’s his goal to be running up front every week.

“We struggled pretty hard in the West Coast swing,” the Bloomington, Ind.-native said. Now we’re getting back toward the Midwest and back closer to home and hopefully we’ll start picking up and this is a good start to that.”

A seventh-place finish at Arizona Speedway is the confidence booster Allen needed.

“It definitely feels good,” Allen said. “I know I can do it.”

He started off his night at Arizona Speedway winning his first Drydene Heat race of the year, putting him in the DIRTVision Fast Pass Dash where he finished third.

Allen, who is still looking for his first career World of Outlaws win, credits some of his success to having a better understanding of different set-ups for different track conditions.

“Last year, I kind of stuck to one set-up,” said Allen, of Hanover, Pa. “It would work on certain race tracks at certain time for the year, but I’m just learning more of the set ups.”

His struggle this year has been keeping up with the car’s set-up throughout the night.

“Sometimes I just struggle,” he said. “Other times I can Qualify good and then I go out there and mess with the set-up for a Heat race and it just makes me feel uncomfortable. I can’t race it the way I want to.”

Now after putting together a successful race throughout the whole night, he has momentum to build off of with his Shark Racing team going into the doubleheader at Devil’s Bowl Speedway in Mesquite, Texas, Friday, April 12, and Saturday, April 13.

“To get back up front with everybody and not fall, and just to compete and feel that good is definitely rewarding,” Allen said.

The last time the Series visited Devil’s Bowl Speedway, Kinser and Marks both finished in the top-10, while Allen finished 11th.

Don’t miss a second of the action at Devil’s Bowl, get your tickets by going to WorldofOutlaws.com/tix or call 844-DIRT-TIX. If you can’t make it to the track, be sure to watch the race LIVE on DIRTVISION.com.