Kevin Swindell hasn’t been in a Sprint Car for almost five years. But when the World of Outlaws NOS Energy Drink Sprint Car Series makes its historic debut on FOX Sports 1 tonight at 8 p.m. (ET), he’ll be one of the top competitors — virtual competitors.

Swindell will be one of 20 elite racers competing in the $1,000-to-win World of Outlaws NOS Energy Drink Sprint Car iRacing Invitational at The (virtual) Dirt Track at Charlotte.

Nine years later, a spine injury from a crash at the 2015 Knoxville Nationals ended his racing career. However, through iRacing and a custom hand control setup, his racing days are far from over.

“It’s been fun,” Swindell said. “Especially to be competitive. I ran a lot with Logan and those guys in the rFactor (simulation) days. A lot of us haven’t run together very much in the last couple of years. It’s been fun to hang out and use TeamSpeak during Heat races to laugh about certain stuff. It’s been a good time.”

Swindell uses a device developed by SimAbility, which makes sim racing adaptive controls, to run the simulated races. Behind the steering wheel are two large “shifter paddles” that he uses for the accelerator and brakes and under them are two smaller actual shifter paddles he can hit with his pinkies to shift the car. He engineered his own addition to the device by attaching a Sprint Car throttle spring to the accelerator paddle to stiffen it up. 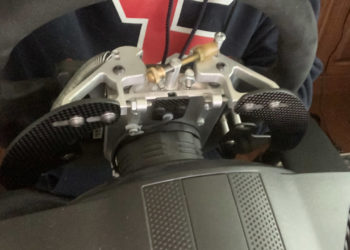 “It’s a pretty nice system,” Swindell said. “It’s built from a wood CNC. It’s a whole piece of aluminum that’s all jigged out. It’s pretty neat to actually look at and hear how little technology [SimAbility] has to make them.”

However, he admitted it’s not the best set up for dirt racing. The accelerator paddle sticks out and is pulled in to accelerate, which is sometimes an awkward pull while trying to maintain the throttle control and constant movement of the wheel needed to be successful on dirt, Swindell said.

“It’ll get a little crooked and it doesn’t pull wide open or it won’t close all the way, so I have to be careful and conscious of that little (throttle) indicator on the screen, making sure everything is right.

“Actually, I think I struggled in the Sprint Car the other night because I calibrated the throttle to where three-quarters throttle was actually full throttle. So, it made it kind of weird to know where I was pedaling, but I wanted to make sure I was always wide open for at least the early part of the night.”

While there may be a few hinderances with his current wheel, it’s a big upgrade from what he first started using.

“Probably right after I got hurt, we took just your basic kind of wheel and took bicycle brakes, like the levers, and basically hose clamped those to the wheel and ran cables to the actual pedal set and let the cables pull the (accelerator and brake) pedals,” he said.

That setup worked well for him, he admitted, but it became an inconvenience. When the sim wheel needs to recalibrate, it spins all the way around in both directions. Swindell couldn’t do that with the cables attached to it. He had to take the system a part. Let the wheel recalibrate and then put it back together, again.

He has his eye on a new prototype SimAbility is working on. It’s the setup socialized about on Twitter that Max Papis has helped put together for injured IndyCar driver Robert Wickens to use in IndyCar’s iRacing events.

“I think the motion and quality of the control is better on the new one they’re working on and has a little bit better spring system in it,” Swindell said. “There’s just not a lot of adjustment on the one I have right now to kind of fine tune some of the tension for running half throttle and things like that.”

Even with some of the hinderances he faces, Swindell has had competitive runs in his three World of Outlaws iRacing Invitational starts. He finished 18th in the inaugural Sprint Car race at virtual Volusia Speedway Park. Then, for round two at The Dirt Track at Charlotte, he contended for the win and led laps early before fading to 11th. The next night he finished 12th in his World of Outlaws Morton Buildings Late Model iRacing debut.

“It was fun, running around the fence (in the Late Model),” Swindell said. “The Sprint Cars are obviously easier for me. I’m a bit more comfortable in those. But, yeah, the Late Models, it’s probably more fun running laps when it got slicker than the Sprint Car because the bumps tend to throw you around. It seems like it’s pretty easy to get behind trying to throttle with my hand. If anything gets really out of control that’s when I tend to struggle, the Late Models seem a little lazier so that makes it easier on me.”

No matter the outcome, he’s having fun racing, and others around him are enjoying seeing him behind a wheel, again — well, maybe not every driver.

After the Sprint Car Invitational on Sunday, Swindell’s wife, Jordan Swindell tweeted, “It’s cool to see [Kevin Swindell] racing again. *Sim racing or not*. Makes my heart happy for him he’s able to adapt to so many different ways of doing things and still finds a way to be good at all of it.”

Swindell owns his own Sprint Car team, which his three-time World of Outlaws NOS Energy Drink Sprint Car champion father, Sammy Swindell, will drive for this year. And he’s also the “owner” of several iRacing teams. His Swindell Speedlab team competes in the World of Outlaws Pro Sprint Car and Late Model World Championships. He’s been a big proponent for eSports racing and is happy to see FOX Sports teaming with the World of Outlaws’ iRacing league.

“It’s cool,” he said. “To see it grow is great and to see it get some big attention is good for it. Those guys, the full-time guys, are impressive to watch. I spotted for Eric Jones in the (NASCAR) Cup race and that was kind of a neat deal to see happen. It’s good that bigger companies are getting behind this while we’re all stuck inside.”

Tune into FOX Sports 1 tonight at 8 p.m. (ET) for the beginning of a weekly FS1 series of iRacing events across multiple disciplines and various virtual racetracks. The World of Outlaws NOS Energy Drink Sprint Cars will take to The (virtual) Dirt Track at Charlotte first for a 35-lap Feature. Then, directly after the Sprint Car race, the World of Outlaws Morton Building Late Models will take their turn around the Charlotte track for a 50-lap Feature.

Both races will be called by Johnny Gibson, “The Voice” of the World of Outlaws, with Adam Alexander serving as the host and Jeff Gordon and Clint Bowyer providing commentary.