A Homecoming at Devil’s Bowl 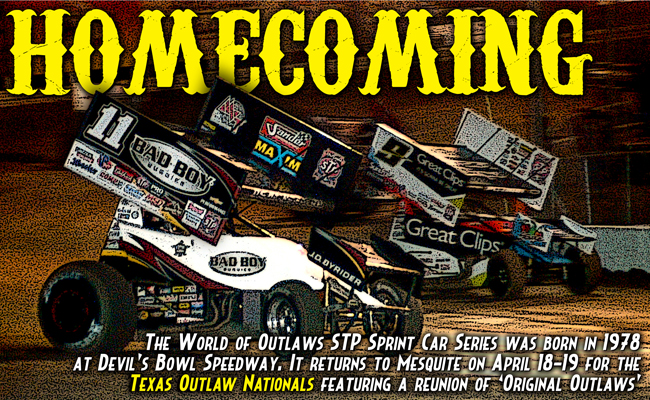 The World of Outlaws STP Sprint Car Series was born in 1978 at Devil’s Bowl Speedway. It returns to Mesquite on April 18-19 for the Texas Outlaw Nationals presented by American Racing Custom Wheels featuring a reunion of ‘Original Outlaws’

MESQUITE, Texas — April 3, 2014 — None of them knew what was ahead back in March of 1978. Ted Johnson gathered a collection of racers from around the country at Lanny Edwards’ Devil’s Bowl Speedway for the track’s spring nationals. Johnson got them the buy in, literally, in some cases, to a vision he had. The World of Outlaws STP Sprint Car Series was born that weekend in Texas. Now, 37 years later and more than a decade since it last competed at the unique half-mile oval, they’re coming home to the Texas Outlaw Nationals presented by American Racing Custom Wheels on April 18-19.

Two of today’s stars were there that weekend: Steve Kinser, who would eventually win 20 championships and become known as the King of the Outlaws, and Sammy Swindell, a standout on quarter-miles around western Tennessee who had never raced on a track as big as Devil’s Bowl but would go on to win three championships and rank behind only Kinser in all-time wins.

Kinser, a winner of 577 full-points features in his Outlaw career, finished last that day. He never envisioned 20 titles, 12 Knoxville Nationals wins, starts in the Indianapolis 500 or the Daytona 500. The son of Bob Kinser, a legendary sprint car racer in his own right, Steve was just hoping for a chance to race on the weekends around his native Bloomington, Ind. Now he’s celebrating his “Salute to the King” season with one last run at winning a 21st crown.

Johnson banded together Kinser and a handful of other sprint car racers and started barnstorming the country. The popularity of the Outlaws grew quickly, but its roots were firmly entrenched in the Dallas suburb of Mesquite, in Johnson’s adopted home state of Texas. Fans from all around the plains would make the trek to Devil’s Bowl, including a kid from suburban Tulsa, Okla., named Daryn Pittman, who would grow up to not only race against the stars he watched but eventually become their champion.

That March weekend was a beginning, but to what nobody really knew. Johnson collected some money for a point fund, put a schedule together and the rest is history.

“The first weekend we ran Devil’s Bowl I ran a red #86 car owned by Jerry Smith out of Missouri, and then after we left there I started running Karl’s car,” said Kinser, who was an Indiana state wrestling champion and the son of one of the sport’s greatest racers of all-time. “I just remember the first weekend Ted Johnson came up and said we needed $40 or $50 to start a point fund … nobody really knew what we were getting into but it just took off from there. All I was trying to do then was hope that I could race on the weekends somewhere. I knew when I left there I had a pretty good shot at getting into Karl’s car. I knew that was a good fast race car and I would have an opportunity to do some good.”

He did a lot of good driving for Karl Kinser. He’s known in racing circles the world over. He’s inspired nearly every sprint car driver behind the wheel of a car today.

A couple of years later, Swindell was able to find owners who could field a car for him full-time on the circuit, and just like that he won two championships and sparked one of racing’s greatest rivalries: Kinser vs. Swindell.

“Devil’s Bowl was one of the first places that we went that was quite a ways from home,” said Swindell, of Germantown, Tenn. “It was a big track for me, it was a lot larger than all the quarter-miles at home. It gave me a chance to learn to race a little different. It’s kind of a place where I sort of grew up a little bit. We ran there quite a bit. It will be nice to go back. The owners, Lanny Edwards and his family, have always been really nice and been really good to us and really supported sprint car racing.”

For kids like Pittman, who was born the year Johnson started the series, and five-time Outlaw champion Donny Schatz, who was born one year earlier and cheered for Doug Wolfgang while growing up in North Dakota, the Outlaws stirred a passion.

“It was what you looked forward to every year as a kid,” said Pittman, a native of Owasso, Okla. “We used to always try to make one trip if not two trips down to Devil’s Bowl every year for the spring and the winter nationals. I went there a lot as a fan when I was a kid to watch. Obviously as a kid it helped spark your interest in what you wanted to become, what you wanted to do by watching those guys race four or five times a year.”

Schatz is coming off a season in which he won 23 times, including his seventh FVP Knoxville Nationals title. With a couple of wins already this season, he’s only four victories behind Mark Kinser for third all-time, and he’s well-aware of his place in the history of the sport and those who came before him.

“When I was five years old I dreamed of doing this, now I’m 36 and I get to I live my dream every day,” said Schatz, who earned the 149th feature win of his career last month at the Las Vegas Motor Speedway dirt track. “To see those guys who still have a love for the sport and they come and see the fans and be a part of the festivities and all the things that go on at the racetracks, it’s definitely very humbling. I’m sure there will come a day when I get to that point when I get that opportunity too, at this time I just enjoy being a race driver and being part of the show.”

While Kinser and Swindell will be behind the wheel when the Outlaws return to Devil’s Bowl later this month, many of their former competitors will also be in attendance, celebrating the origin of the series that launched so many careers that have earned a place in the National Sprint Car Hall of Fame in Knoxville, Iowa.

Doug Wolfgang will be there. Rick Ferkel will be there. Norman Martin, who won the first of two prelim nights, will be there. Bobby Marshall and Steve Perry will be there. Car owner CK Spurlock will be there as will his driver in that race, Charlie Swartz. Shane Carson, the racer turned promoter turned race director who is working to reunite all of these great drivers at Devil’s Bowl, will be there. Even Jimmy Boyd’s feature-winning car will journey from the Woodland Auto Display museum in California to Devil’s Bowl for the event. Carson has nearly everybody involved in that first event in 1978 returning for this weekend, with the “Original Outlaws” signing autographs on Saturday afternoon.

Ultimately, there’s just something about the unique half-mile that brings a smile and a distant look of fondness to the drivers’ faces, as if they’re answering questions but thinking ahead to the challenge of racing at the same time.

Swindell’s 12 feature victories are the most of any World of Outlaws STP Sprint Car Series driver at Devil’s Bowl.

“It’s always challenging track because both ends are different and you’re going uphill and downhill, you don’t get that a lot of places,” Swindell said. “The experience comes into play there so that helps. I look forward to the challenge.”

Schatz started running on the Outlaw tour in earnest in 1997, when he was named rookie of the year. None of his 149 victories came at Devil’s Bowl but he’s certainly looking forward to changing that in a couple of weeks.

“I remember when I first went there,” Schatz said. “It’s definitely a unique surface, it’s tricky to be able to race there. You look forward to that. It’s where you can be better than someone else because it’s not an easy place to get around. I look forward to trying to have a great run.”

The history that will surround the two-day Texas Outlaw Nationals presented by American Racing Custom Wheels will be unparalleled. On Friday night, the World of Outlaws STP Sprint Car Series and Devil’s Bowl will honor Kinser as part of the “Salute to the King” tour. Then on Saturday, the original Outlaws will participate in a one-of-kind autograph session with some of the greatest drivers to have ever wheeled a sprint car.

All seats for the event are reserved and available at www.WorldofOutlaws.com/tickets or by calling the ticket hotline at 877-395-8606.