A FATHER’S GIFT: Jac Haudenschild honored by son with last ride at Charlotte 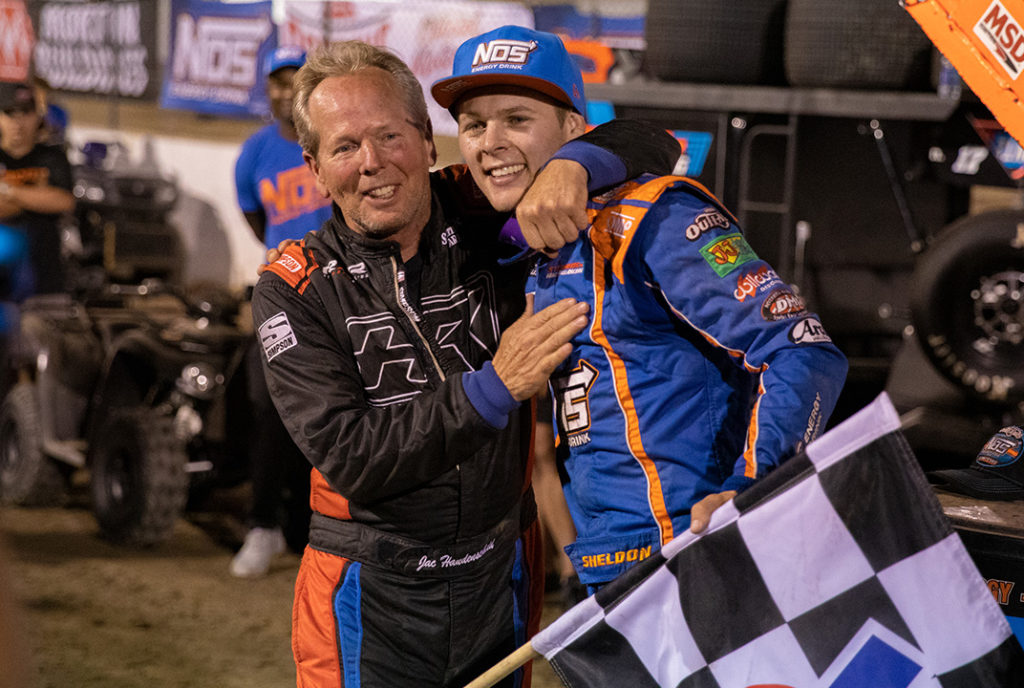 At the birth of Sheldon Haudenschild’s Sprint Car career was a white #93 car with his father Jac Haudenschild by his side. Now, at the conclusion of Jac’s historic career, that white #93 is back with Sheldon by Jac’s side.

Hall of Famer Sprint Car driver and 72-time World of Outlaws NOS Energy Drink Sprint Car Series winner Jac Haudenschild, of Wooster, OH, will hang up his helmet at the conclusion of Saturday’s NGK NTK World of Outlaws World Finals at The Dirt Track at Charlotte (Nov. 5-6). Giving him the opportunity to do so, Haudenschild Racing – owned by his son Sheldon and daughter-in-law Zan Haudenschild – is fielding a #93 car for the “Wild Child.”

“I got hooked up here running Sheldon’s car, we’ll just run down here this week and that’ll be about it,” the elder Haudenschild said. “I worked with him (Sheldon) when he first started racing. He’s had mechanics the last few years here. It’s fun to be a team car with him here in my last race.”

One Last Ride for The Wild Child pic.twitter.com/OLTN6Az83x

Entering the season-ending event, Haudenschild said the emotions of the weekend haven’t set in yet. He’s just enjoying all the racing he gets to do.

His first career World of Outlaws win came at Eldora Speedway in 1982 and last also came at the “Big E” in 2010. This year, Haudenschild competed in five World of Outlaws events, behind the wheel of a Rico Abreu Racing #22 car, donning his historic Pennzoil scheme. His best finish was 14th at Eldora.

Haudenschild awarded himself a meaningful victory in front of his hometown fans at Wayne County Speedway in August.

Of his extensive career, Haudenschild said the memories that stand out the most are all the team owners he got to drive for and the opportunities they gave him. And at Charlotte, he adds his son to that lucrative list.

“Yeah, yeah, it’s pretty good,” Haudenschild said with a smile when talking about his son fielding a car for him. “He’s just a little bit of a car owner here, but that’s good for the last race.”

For tickets to the NGK NTK World of Outlaws World Finals at The Dirt Track at Charlotte to see Jac Haudenschild’s final two nights of racing, CLICK HERE.