1 To Go: Schatz the One at World Finals 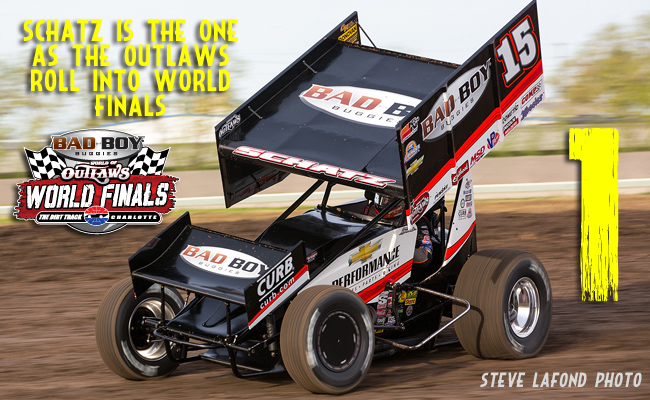 The 2015 World of Outlaws Sprint Car Series season will be remembered as a year dominated by one driver – Donny Schatz. In a word, the year was historic for the No. 15 Bad Boy Buggies/Chevrolet Performance team.

If he hadn’t already done so, Donny Schatz has cemented his place as the most dominant driver of his generation.

He fired the opening shot of the 2015 season on night two of DIRTcar Nationals in Florida. After a string of eight different winners to the start the year, he became the first repeat winner of the season, parking his car in victory lane at Stockton.

Schatz won the second Texas Outlaw Nationals title and swept the spring races at Eldora. He scored five in a row as the series rolled through the upper Midwest.

When the series returned to Knoxville Raceway for the Knoxville Nationals everyone was gunning for the number 15. But Schatz made it look easy as he parked his car in victory lane for the ninth time in his career.

“The minute I took that checkered flag I was teary-eyed,” Schatz said. “To see the race team, to see the excitement in their eyes, the manufacturers, all the people we get to work with, that makes this so much more special than me just getting the biggest check and the biggest trophy and the most prestigious race of the year. It’s the people that get to go along with you… when you can get them all in one spot and enjoy something like that it makes it worth living.”

At Grays Harbor Raceway, Schatz did something only two other drivers before him had done – he crossed the double century mark in total career wins.

“Unbelieveable,” Schatz said of his 200th win. “I’ve just been blessed being around great people my whole life. My family has supported me whole heartedly to this point and these guys I get to race with are awesome. Without their hard work, and all the guys who ever worked for me, there’s no way I would have ever got this far.”

If that wasn’t enough, he became the first driver since 1992 and just the second driver ever to score more than 30 wins in a single season when he parked his car on the front stretch at Berlin Raceway.

Donny Schatz and his Tony Stewart/Curb-Agajanian Racing team of Ricky Warner, Eric Prutzman and Steve Swenson again combined an intense drive, extraordinary skill and unparalleled luck in what can only be described as a flawless season.

With one day remaining before the kick off of the Bad Boy Buggies World Finals, Donny Schatz rolls into the event, for the seventh time in his career, the World of Outlaws Sprint Car Series champion.