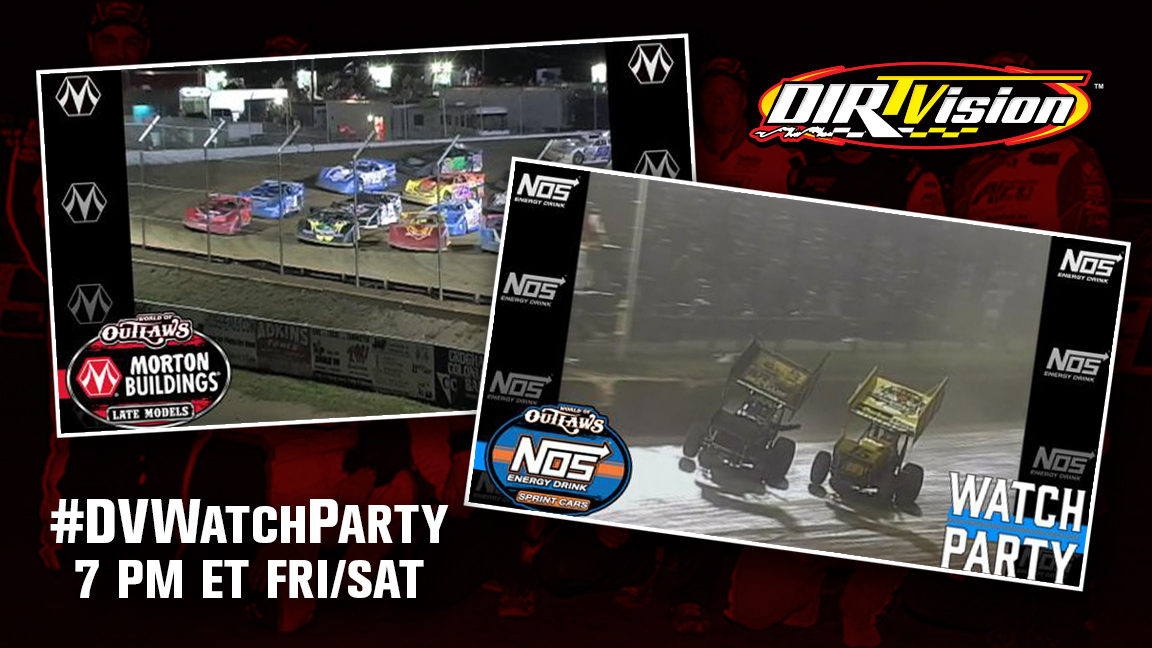 CONCORD, NC — It’s a Hall-of-Fame Friday and Summer-of-Money Saturday this weekend on DIRTVision presented by Drydene when some of Dirt Track Racing’s most popular drivers come together to recall a few of their most memorable World of Outlaws races.

First up tonight at 7 pm ET presented by Morton Buildings, the comedy duo of Hall-of-Famer Chub Frank and his cousin, former crew chief and current Outlaw racer Boom Briggs, recount a huge 2005 night at Lernerville Speedway when Frank surged to a televised $20,000 victory. Then, fellow Hall-of-Famer and 2011 World of Outlaws Morton Buildings Late Model Series champion Rick Eckert is joined by four-time Series champ Josh Richards to recall Eckert’s heartbreaking night in 2010 at Attica Raceway Park that turned completely around for one of his most memorable victories.

At 7 pm ET on Saturday night presented by NOS Energy Drink, DIRTVision flashes back to the 2007 Summer of Money events that aired Sunday mornings on ESPN2, just hours after the checkered flag waved Saturday night.

To kick off the Summer of Money races, DIRTVision welcomes Joey Saldana, who won a thriller at Federated Auto Parts Raceway at I-55, and Bobby Gerould, who handled play-by-play during the events. Saldana weaves through the field with an on-board camera as Gerould masterfully calls the action, now the two look back on that night and share their insights with the viewers.

Finally, it’s the race simply known as “The Wave” from K-C Raceway, now Atomic Speedway. Terry McCarl — or “TV Terry” as he was especially known that summer — passes Donny Schatz for the lead, and as he goes by waves to Schatz in a bold move. And then, the caution comes out. Uh oh, McCarl has to hold off Schatz to the checkered flag. McCarl and Schatz join host Dillon Welch to talk about that night and the bond it created.

Tune into DIRTVision at 7 pm ET Friday and Saturday to see the races and hear from those key players during the #DVWatchParty. It’s all part of the DIRTVision FAST PASS.