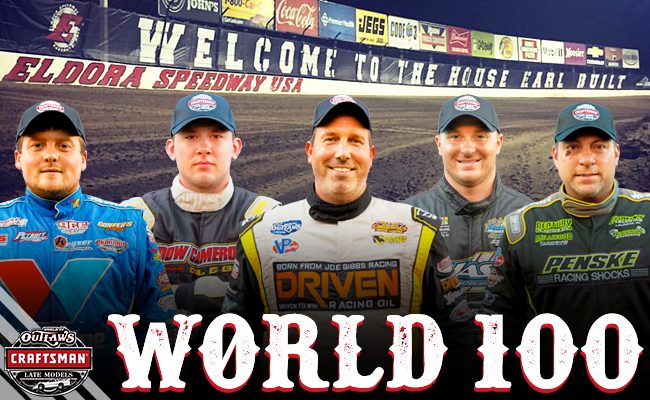 CONCORD, NC— Sept. 7, 2017— Dirt Late Model fans and drivers from all over the world are converging in Rossburg, OH for one of the most prestigious and anticipated Dirt Late Model events of the season: The 47th annual World 100 at Eldora Speedway, held September 7-9.

Last year, the richest purse in history for a recurring Dirt Late Model event was handed out. This year, the purse has increased by $36,000. Joining the action at Eldora for the DIRTcar Racing event will be five World of Outlaws Craftsman Late Model Series drivers looking to claim a chunk of the $425,800 purse and leave with the admired globe trophy.

Shane Clanton has started in the World 100 nine times since 2004. On his fourth start, Clanton won his first and only World 100 in 2008.  After his win, he said, “That check goes a long way, but that (globe) trophy will be there forever.” Clanton is looking forward to getting back to Eldora to try to add a second globe to his decorated trophy collection. While he is away from home focusing on the race, he will also be anxiously awaiting a call from his wife Michelle who is expecting their second child any day.

Frank Heckenast Jr. has started in the World 100 three times since his first attempt four years ago in 2013. His best finish was in 2015, when he finished 15th in the main event out of 106 drivers who entered into the show. During the Dirt Late Model Dream at Eldora earlier this season, Heckenast finished 28th after experiencing some mechanical difficulties. Within the past month on the tour with the Outlaws, Heckenast has racked up four top-five finishes and six top-10 finishes of 10 Series races. He has shown some great strides towards Victory Lane during the second part of the 2017 season.

Chris Madden is known for his love of wide open, fast, half-mile tracks; his favorite half-mile of all time being Eldora Speedway. Madden has started in the World 100 10 times since 2006. His best finish during the prestigious event was in 2011 with a sixth-place finish. Madden’s most recent crown jewel event at Eldora was the Dirt Late Model Dream, where he finished fifth

Devin Moran’s father Donnie is second on the all-times wins list for the World 100 with four wins occurring in 1989, 1992, 1996, 1997. Donnie is one of the most decorated drivers to ever take on Eldora Speedway with four World 100 wins, paired with one Dirt Late Model Dream victory in 1996 and the highest paying Late Model race to ever take place, the Eldora Million in 2001. Devin is looking to follow in his father’s footsteps and hopes to add to the collection of globes sitting in their Dresden, OH race shop. Devin has started in the World 100 two times, scoring a 23rd place finish in 2015 and a 17th place finish in 2016.

Brandon Sheppard has been a threat to Victory Lane every time he hits the track paired with the Rocket 1 Racing Team. At the 2017 Dirt Late Model Dream, Sheppard finished one spot shy of claiming the checkers, which added fuel to the fire for the team who had suffered a second-place finish with Josh Richards behind the wheel during the 2016 Dream. Two runner-up finishes for the Rocket Chassis House Car will have Sheppard and his team gunning for redemption at the half-mile dirt track.