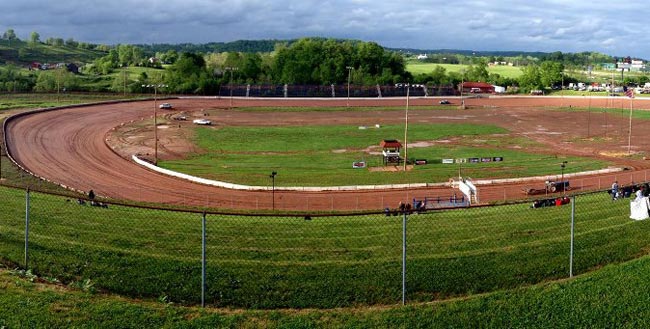 MINERAL WELLS, WV – Aug. 27, 2013 – The last time the World of Outlaws Late Model Series stopped at West Virginia Motor Speedway, the three-decade-old track was one of the biggest, fastest dirt ovals in the country.

But when the stars of the national tour return to WVMS on Friday night (Aug. 30) after a three-year absence for a 50-lap, $10,000-to-win event that closes out the facility’s 2013 RaceFest, they will find a different racetrack staring them in the face.

The place is still fast, of course, but it’s not quite so big anymore.

Friday night’s program will mark the first WoO LMS’s first appearance at WVMS since the speedway was shortened in 2012 to four-tenths of a mile from its former sprawling five-eighths-mile layout. It will be just the fourth dirt Late Model event overall contested on the new configuration, which debuted last September.

Just two WoO LMS regulars enter the circuit’s Labor Day holiday weekend kickoff having turned laps on the shorter West Virginia speedplant – and only one of those racers has a full feature worth of experience under his belt. That particular Outlaw is two-time series champion and current points leader Josh Richards of Shinnston, W.Va., who on April 21 finished a hard-charging second in the track’s 50-lap Lucas Oil Late Model Dirt Series event.

Richards, 25, came away impressed by the changes made to WVMS after his springtime visit.

“Shortening the track up was definitely what that place needed,” said Richards, who lives about an hour-and-a-half to the east of WVMS. “Anytime you get to a track that’s overly big, it’s hard to get the racing good and close just because of the aerodynamics of the cars and just how good the cars are now. Smaller tracks just tend to race better.

“I went there when I was little and I ran there a handful of times over the years,” he continued. “The big track, I didn’t care for as much. But now, it’s a different story. When we were there in April, it raced real well. It was one of the better tracks we’ve been on all year.”

Richards’s performance on April 21 proved that passing certainly isn’t at a premium at WVMS. He had to restart at the rear of the field after slapping the turn-three wall on the opening lap and pitting one circuit later for repairs – and then, even with his father Mark’s Valvoline-sponsored Rocket Chassis house car not 100 percent, he worked his way through the solid field to finish a fast-closing second behind winner Eddie Carrier Jr.

“You can move around there,” said Richards. “When we were there it was a little dry so the groove was mostly middle-low, but it was wide enough to where you could race. We came from the back to run second with a car that was a little beat up, so I think that showed how racy it was.”

Richards said he’s “expecting a pretty good race for the fans” when the WoO LMS invades on Friday night. He believes that the track lends itself to exciting competition.

“It’s really unique now,” Richards said of WVMS. “They’ve shortened it up (bringing in turns three and four), but it’s still sort of got a big-track feel to it. (Turns) one and two are still the same, but you’re just not carrying near as much speed through there so you can race a little bit better at that end than you could before. And (turns) three and four aren’t symmetrical, so it’s got some character to it.

“I think three and four is where most of the passing happens because it’s not a ‘perfect’ corner. That’s usually better for a racetrack. You get a track that’s real symmetrical and that’s when the lines get very similar so you just stand on it and carry speed around, which makes it harder to pass.

“There’s gonna be a lot of good cars there (on Friday night) and it will definitely be leaps and bounds better than it was before,” he added. “The big track was just so hard to actually race on. It was fun to drive on because you were going fast, but it was hard to race on. I think the smaller track is perfect for giving fans the best racing possible.”

Richards would like nothing better than to end up in Victory Lane at the conclusion of Friday night’s 50-lapper. He no longer is pursuing a feature win in his home state – he finally accomplished that for the first time in his career on May 25 when he was triumphant in a WoO LMS A-Main at Tyler County Speedway in Middlebourne, W.Va. – but he is riding a rare nine-race World of Outlaws winless streak that he’d like to snap in his backyard.

“We just a need a win,” said Richards, whose last WoO LMS victory came on July 11 at Red River Co-op Speedway in Winnipeg, Manitoba. “We gotta try to get back to winning like we were in the early and middle of the summer. We’ve still been consistent and still been good – which is why we’ve been able to stay at the top of the points – but we want to get back to winning some races. West Virginia would be a good place to start.”

Richards, who enters the Labor Day racing weekend with seven WoO LMS wins this season and leading the points standings by 68 points over Shane Clanton of Zebulon, Ga., and 82 points over defending champion Darrell Lanigan of Union, Ky., never finished better than 10th in the four previous WoO LMS A-Main run on the five-eighths-mile WVMS oval. He placed 10th and 18th in the twin features contested in 2004 (Kentucky’s Jackie Boggs swept the pair of races) and finished 11th in both ends of the 2010 doubleheader (Steve Shaver of Vienna, W.Va., won both events).

In addition to Richards, Clanton and Lanigan, the WoO LMS roster on Friday night will feature Tim McCreadie of Watertown, N.Y., who joined Richards in the April 21 Lucas Oil Series event at WVMS but was an early retiree (finished 25th); Rick Eckert of York, Pa.; Tim Fuller of Watertown, N.Y.; Chub Frank of Bear Lake, Pa.; Bub McCool of Vicksburg, Miss.; Clint Smith of Senoia, Ga.; and Rookie of the Year contenders Eric Wells of Hazard, Ky., and Morgan Bagley of Longview, Texas.

Drivers expected to challenge the Outlaws include Shaver, 2004 WoO LMS champion Scott Bloomquist of Mooresburg, Tenn., and Jared Hawkins of Fairmont, W.Va. – all past winners of World of Outlaws events.

The WoO LMS competition will headline a big night of racing on Friday at WVMS. Also on the card will be the Ohio Valley Sprint Car Association 410 Sprint Cars, the Renegades of Dirt Traveling Modifieds, front-wheel-drive 4-cylinders and the EDGE HotMods.

RaceFest will begin on Thurs., Aug. 29, with a program that includes a $4,000-to-win ADRA Super Late Model feature plus events for the OVSCA 410 Sprint Cars, the Renegades of Dirt Traveling Modifieds and the front-wheel-drive 4-cylinders.

Track officials have announced that the highest-finishing driver in Thursday night’s ADRA Super Late Model feature who does not qualify for Friday night’s WoO LMS A-Main will be awarded a provisional starting spot in the headliner.

For ticket information and other details on RaceFest at WVMS, visit www.wvspeedway.com.

Friday night’s event at WVMS starts a busy Labor Day weekend for the WoO LMS, which moves on to Selinsgrove (Pa.) Speedway for complete shows on Sat., Aug. 31, and Sun., Sept. 1. An $8,000 top prize will be on the line in Saturday night’s 40-lap ‘Showdown on Sand Hill’ and a $10,000 check will go to the winner of Sunday evening’s 50-lap Late Model National Open.