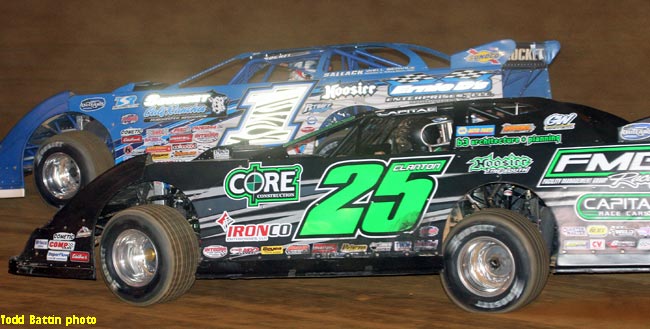 CONCORD, NC – Aug. 14, 2013 – The stretch drive of the 2013 World of Outlaws Late Model Series campaign begins this weekend in the Wolverine State.

With the national tour’s three longest swings of the summer now complete, the battle for the $100,000 points championship shifts to short bursts of action like the NAPA Auto Parts-sponsored doubleheader at Winston Speedway in Montague, Mich., on Friday night (Aug. 16) and Merritt Speedway in Lake City, Mich., on Saturday evening (Aug. 17).

Just 14 events remain on the schedule as the WoO LMS embarks on its third annual mid-August trip to northern Michigan for the NAPA Winston 50 Presented by Keyser Manufacturing and the NAPA Merritt 50 Presented by Allstar Performance. Both races boast $10,000 first-place prizes.

Sitting atop the WoO LMS points standings entering the weekend is Josh Richards of Shinnston, W.Va., who, with wins at Winston in 2011 and Merritt in 2012, is the only driver to reach Victory Lane at both tracks. He leads Shane Clanton of Zebulon, Ga., by 48 points and defending champ Darrell Lanigan of Union, Ky., by 64 points, but the 25-year-old full-fender superstar is coming off a rare DNF in the last WoO LMS event that significantly cut into his advantage.

Richards, whose last four full seasons as a WoO LMS regular feature two titles (2009, ’10) and two runner-up finishes (’08, ’11), has held sole possession of the points lead since Race No. 3 on this year’s tour. His edge swelled to a season-high 78 points over Clanton and 98 over Lanigan before Race No. 33 on Aug. 5 at Independence (Iowa) Motor Speedway, but a 17th-place finish at the Hawkeye State oval brought him back to the pack and rekindled talk of a dramatic battle to the final checkered flag of ’13. In fact, the top three drivers in the WoO LMS standings are separated by less than 100 points in mid-August for the first time since 2010.

Winston and Merritt figure to be good places for Richards to rebound as he bids to become the first driver to win three WoO LMS championships since the circuit was restarted in 2004 under the World Racing Group banner. In addition to his wins at each track, he finished second at Winston in 2012 and fifth at Merritt in 2011.

“We had a bad night (at Independence) because of a mechanical failure nobody on our team is going to let it get us down,” said Richards, who has piloted his father Mark’s Valvoline-sponsored Rocket Chassis house car to seven wins, 22 top-five and 30 top-10 finishes this season. “We’ll put it behind us and come back strong in Michigan. We’ve had a lot of success at both tracks so I’m confident we can get back on track up there.”

The two drivers most closely in pursuit of Richards are primed to finish the season strong, though neither Clanton nor Lanigan has won at Winston or Merritt.

Clanton, who turns 38 on Aug. 29, is enjoying a career year on the WoO LMS. He’s finished as high as second in the tour’s points standings (2006), but with four wins, 19 top-five and 30 top-10 finishes this season he’s never looked better on the grueling World of Outlaws trail.

The Peach State racer will need to unearth some good fortune at this weekend’s speedways, however. He performed satisfactorily at both tracks in 2011 (fifth at Winston, sixth at Merritt), but last year he wasn’t running at the finish in either event (21st at Winston, 11th at Merritt).

The 43-year-old Lanigan, meanwhile, heads to Michigan hot off his series-leading eighth victory of ’13 at Independence – a triumph that helped him right a season that appeared to be going in the wrong direction. After a four-race slump saw him fall from second in the standings and 38 points behind Richards to third and 98 points in arrears, he’s pulled back into contention for a second consecutive title.

In his previous appearances at the Michigan tracks, Lanigan finished fourth at both in 2011 and last year placed fifth at Winston and eighth at Merritt. His run at Winston one year ago snapped his WoO LMS-record winning streak at six.

The only other driver still with an outside shot at the WoO LMS title is 2011 champ Rick Eckert of York, Pa., who sits fourth in the standings, 148 points behind Richards. Of course, no driver has ever come back from a deficit of over 100 points to win the championship.

Eckert has had some success in the Michigan twin bill, posting just one poor finish (16th at Merritt in ’11). He won last year’s A-Main at Winston after finishing third there in ’11, and he placed fifth last year at Merritt.

Other WoO LMS regulars who will compete at Winston and Merritt (and their past performances at the tracks) include:

* Bub McCool of Vicksburg, Miss., competed for the first time at both tracks last year, finishing 11th at Winston and 15th at Merritt.

WoO LMS Rookie of the Year aspirants Eric Wells of Hazard, Ky., and Morgan Bagley of Longview, Texas, will make their first-ever starts at both speedways this weekend.

The World of Outlaws standouts will be challenged this weekend by an array of talented drivers, including Brady Smith of Solon Springs, Wis., who won the ’11 WoO LMS event at Merritt; Brandon Sheppard of New Berlin, Ill., who won a WoO LMS A-Main on Aug. 1 at Cedar Lake Speedway and last year finished second in the tour’s stop at Merritt competing as a Rocket Chassis house car teammate to Richards; Jason Feger of Bloomington, Ill., who recorded top-10 finishes at both tracks last year; Mike Spatola of Manhattan, Ill., who placed a series career-best fourth last year at Merritt; and Michigan racers Jeep VanWormer of Pinconning, Ryan VanderVeen of Six Lakes, Brandon Thirlby of Traverse City, Eric Spangler of Lake City, Curtis Roberts of Coleman, Rich Neiser of Fruit Port and Tom Sprague Jr. of Muskegon.

Both races will be run under a tire rule that allows the use of DIRTcar UMP’s Hoosier LM 20-, 30- or 40-compound rubber.

Fri., Aug. 16, at Winston Speedway in Montague, Mich.: Pit gates are scheduled to open at 4 p.m. and the grandstand gates will be unlocked at 5 p.m. Hot laps are set to begin at 6:30 p.m. with time trials to follow and the first race scheduled to hit the track at 7:30 p.m.

Winston’s racing program will also include action for the UMP Modified and Street Stock divisions.

Tickets are $25 and tower passes cost $35 for the program, which also includes racing for the UMP Modified and Lightning Sprint classes. Pit passes will be $35.

More info can be obtained by visiting www.merrittspeedwaymi.com or calling 231-328-RACE (7223).