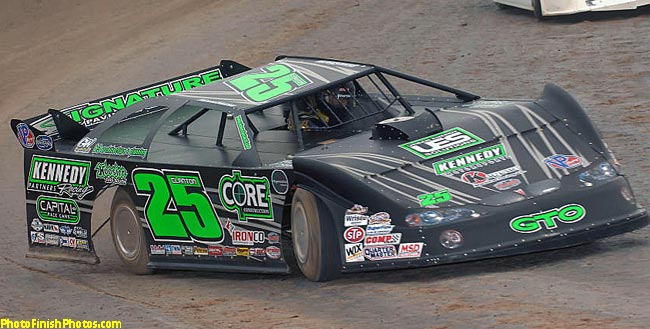 SYLVANIA, GA – Feb. 7, 2012 – If Shane Clanton manages to kick off the 2012 World of Outlaws Late Model Series campaign with a rousing home-state victory this Saturday night (Feb. 11) in the ‘Winter Freeze’ at Screven Motor Speedway, he will have earned every cent of the race’s $20,000 first-place prize.

Success at Screven would culminate a grueling three-week stretch for Clanton, whose off-season move to a new team – and preparation for the start of the WoO LMS schedule – was made even more challenging by a disastrous mid-January racing trip to Arizona.

Clanton, 36, of Fayetteville, Ga., has been in full scramble mode since a devastating crash on Jan. 18 at USA Raceway in Tucson, Ariz., cut short his debut with Kennedy Motorsports. The crash left his Capital Race Cars machine damaged beyond repair, forcing him to depart the unsanctioned Wild West Shootout after just three of six scheduled events and return home to hastily regroup.

“That wreck really put me behind the eight-ball,” said Clanton, who in late November ended his nine-year association with Georgia team owner Ronnie Dobbins to join John Kennedy’s fledgling operation as a teammate to 2011 WoO LMS rookie John Lobb of Frewsburg, N.Y. “We worked hard to get ready for the Arizona trip, but losing a car out there pretty much put us back to square one. We’ve been working our tails off to get my new car done and Lobb’s new car done (in time for Screven).”

Both Clanton and Lobb will have new Capital Race Cars – chassis that are built in a collaborative effort between Clanton and former dirt Late Model racer Marshall Green – ready for action in the ‘Winter Freeze,’ which includes time trials and heat races on Friday night (Feb. 10) and B-Mains and the 60-lap A-Main on Saturday evening (Feb. 11). But they will have to share one backup car because Clanton’s crash leaves the team down one vehicle.

It’s not the ideal situation for Clanton, who is hoping his dramatic change in race team scenery will allow him to rebound from a frustrating 2011 in which he won just one WoO LMS A-Main and finished a disappointing seventh in the points standings. The bump in the road hasn’t gotten him down, however.

“I feel good and I feel confident in what we’re doing,” said Clanton, who has been a WoO LMS regular since 2005 and finished as high as second in the points standings (2006). “We’re prepared as much as we possibly can be in the time we’ve had after losing that car in Arizona. We’ve been working day and night to get everything done and nobody is hanging their head.”

Clanton’s performance before the Arizona crash certainly buoys his spirits. Engine problems in the Wild West Shootout opener left him a non-qualifier and forced his team to purchase a powerplant from Billy Moyer to continue racing, but he improved in each of his next two starts – to the point, in fact, that he was leading the feature when he clipped an inside marker tire in turn four and careened nearly head-on into the outside wall.

“We were definitely going in the right direction,” said Clanton. “I thought we had made some progress. We went from not making the race (Night 1) to winning a heat race and running eighth (Night 2) and then leading the race (Night 3).

“(The accident) was a mistake on my part,” he added. “We just knocked ourselves out and ended up with more work than we should have had.”

Clanton, who felt sore for “three or four days” after absorbing what he called “probably the second-hardest hit I’ve ever taken in a crash,” plans to arrive at Screven on Thursday night to shake down his car in an open practice session. Then he expects to spend the remainder of the weekend battling for the checkered flag in the biggest event ever presented at Screven, a three-eighths-mile oval that its colorful owner, Redd Griffin, began cutting out of a cotton field 16 years ago.

With a triumph, Clanton would become the first driver hailing from Georgia to win a WoO LMS A-Main at Screven. The track’s previous tour events were captured by Steve Francis of Ashland, Ky. (2008), Tim Fuller of Watertown, N.Y. (2009) and Austin Hubbard of Seaford, Del. (2010) – all of whom are expected to enter the ‘Winter Freeze.’

“I seem to run good every time I’ve been to Screven, so I think we’ll have a good shot it,” said Clanton, who has finished third (’08), sixth (’09) and 13th (’10) in WoO LMS action at the speedway. “Hopefully we can start the year off on the right foot. It would be huge for us. The motivation is definitely there, so if we can get going good right out of the box it would build some momentum.”

Clanton will face off with what figures to be the largest, most talented field of dirt Late Model drivers ever to grace Screven’s pit area. Six of the seven former WoO LMS champions are planning to participate, including defending titlist Rick Eckert of York, Pa., Josh Richards of Shinnston, W.Va. (2009-10), Darrell Lanigan of Union, Ky. (2008), Steve Francis (2007), Tim McCreadie of Watertown, N.Y. (2006) and Billy Moyer of Batesville, Ark. (1988-89, 2005).

A full weekend of activities is in the works for Winter Freeze attendees, starting with an open practice session running from 6-10 p.m. on Thurs., Feb. 9. The schedule of events on Fri., Feb. 10, includes WoO LMS time trials and heat races plus full programs for the All-Star Circuit of Champions Sprint Car Series and the Screven Late Model division ($1,500 to win), while the card on Sat., Feb. 11, features B-Mains and the lucrative Winter Freeze finale for the WoO LMS as well as another $5,000-to-win All-Star Sprint Car show and a $2,500-to-win crate Late Model headliner. Griffin said he will also add a WoO LMS Non-Qualifiers’ Race to Saturday’s slate if more than 48 cars sign in for competition.

In addition, Griffin will keep things busy on his property Saturday afternoon, with Gee Chee Creek Mudd Drags competition, racing at his Gamecock Speedway go-kart oval and challenge races between World of Outlaws drivers and fans on a rental kart track. The mud-bog and go-kart action is included in Saturday’s $35 adult ticket price, which also provides an all-access pass to the pit area of each racing venue.

Screven Motor Speedway will provide free camping (no hookups) on the paved dragstrip on a first-come, first-served basis.

More information on the Winter Freeze is available by logging on to www.screvenmotorspeedway.com or calling 912-228-5886.

Screven Motor Speedway is located between Mile Markers 6 and 7 on GA Route 21 in Screven County, Ga., about 45 minutes Northwest of Savannah.

A busy month of February for the WoO LMS will continue after the Winter Freeze. The tour will head farther south for the inaugural ‘Bubba Army Late Model Winter Nationals’ on Feb. 16-18 at Bubba Raceway Park in Ocala, Fla., and two dates (Feb. 23 and 25) during the UNOH DIRTcar Nationals Presented by Summit Racing Equipment at Volusia Speedway Park in Barberville, Fla.