WHAT TO WATCH FOR: World of Outlaws CASE Late Models prepare to Gator Hunt at Volusia Speedway Park 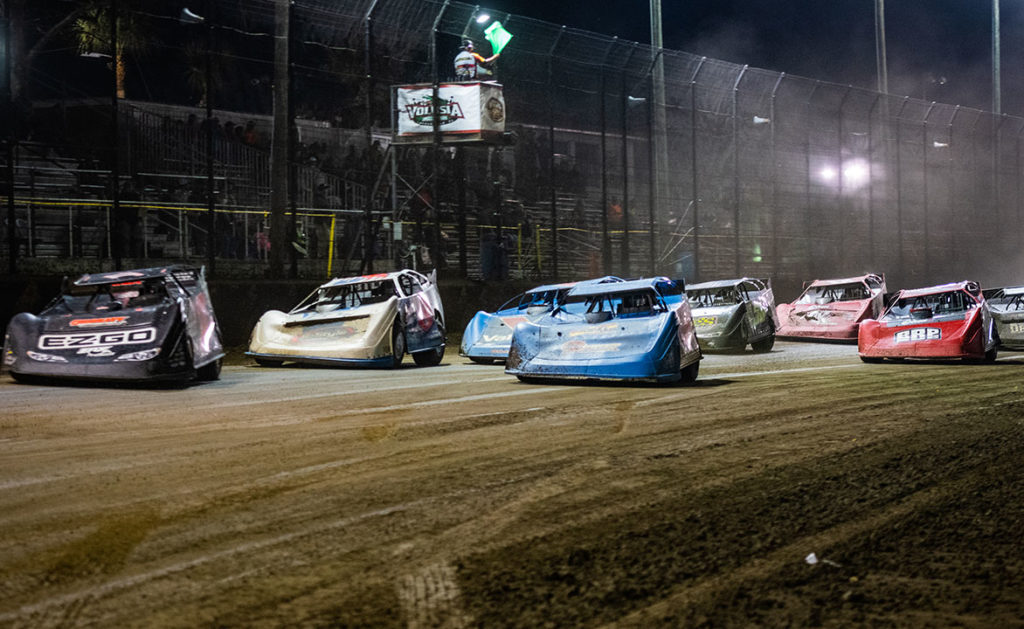 The yearly quest for a “Big Gator” is on at Volusia Speedway Park as the World of Outlaws CASE Late Models make their second trip to the Florida this season for the 51st DIRTcar Nationals, Feb. 16-19.

Also, before The Most Powerful Late Models on the Planet take center stage, two nights of DIRTcar Late Model action kick off the week with a pair of 30-lap, $7,000-to-win Features Feb. 14-15.

Drivers will accumulate points on all six nights to determine who adds a “Big Gator” trophy to their mantle. Wednesday’s Sunshine Nationals Feature won’t count toward the Big Gator Championship

The Super DIRTcar Series will join the Late Models all week, along with the debut of the Xtreme Outlaw Sprint Cars presented by Low-E Insulation on Feb. 14-15.

Here are some of the storylines to keep an eye on entering DIRTcar Nationals:

Sheppard Rolls in Hot: Four-time and defending Series champion Brandon Sheppard is already off to a hot start in 2022. In January, he opened the season with two wins at the Wild West Shootout and backed it up with four wins across Florida.

The “Rocket Shepp” is also no stranger to Victory Lane at Volusia, winning eight DIRTcar Nationals Features since 2017. Despite those wins, he’s hoping to rebound after his best finish was sixth at the Florida venue in 2021.

He opened the 2022 season with a seventh-place finish at Sunshine Nationals and hopes to keep up that consistency during the seven-race week.

Skyline’s the Limit: Skyline Motorsports has double the odds of walking away with a “Big Gator” at this year’s DIRTcar Nationals.

Shane Clanton won the week-long chase in 2015, winning four out of five Features. The “Georgia Bulldog” has six DIRTcar Nationals victories and scored a top-10 when the Series visited Volusia in January.

Meanwhile, his teammate, 2021 World of Outlaws Rookie of the Year Tyler Bruening, has been consistent at The World’s Fastest Half-Mile. The Decorah, IA driver, has four straight top-10’s at Volusia, including three in 2021 which kicked off his third-place points finish.

Bruening is still trying to find Victory Lane with the World of Outlaws for the first time. He’s found success on tracks a half-mile or larger, grabbing three top-fives and nine top-10s in 2021.

Erb is the Word: Brandon Sheppard isn’t the only Illinois driver who’s had a fast start to 2022. Dennis Erb Jr. also enjoys the Florida sun, especially after his second-place finish in the season opener at Sunshine Nationals.

The Carpentersville, IL driver backed it up with a Florida Speedweeks victory earlier this month, showing he’ll be a contender among the best dirt Late Model racing has to offer.

While he’s yet to win a Feature at DIRTcar Nationals, he’s scored two top-fives, and three top-10s in his last three races at The World’s Fastest Half-Mile.

If Erb, flanked by 2021 Crew Chief of the Year Heather Lyne, can keep his consistency going at Volusia, it could put him in a position to contend for his first World of Outlaws CASE Late Models championship.

Viper Strike: The 2022 World of Outlaws Rookie Class has six drivers vying to be at the top of the list. But after one Feature, Max Blair stands above the rest.

In January, Blair opened the season with an eighth-place finish—nine spots ahead of the next highest finishing rookie Gordy Gundaker.

While Blair has the early jump on his competition, five World of Outlaws Features are up for grabs at Volusia, and any of the six rookies could take advantage into The Rev in March.

Heat Seeking Mailman: When the quest for the “Big Gator” begins on Monday, Devin Moran is looking to go back-to-back.

The Dresden, OH driver has entered 13 races in 2022, grabbing three wins and eight top-fives. He’s only finished outside the top-10 once.

While “The Mailman” finished 22nd in the season opener at Volusia Speedway Park during Sunshine Nationals, he was in the top-five when bad luck sidelined him during the 30-lap Feature.

Moran has found success on half-mile tracks in the past—winning a Feature at DIRTcar Nationals in 2021 and backing it up with a victory at Bristol Motor Speedway last April.

Return of the Mac: Dale McDowell opened his 2022 season in style, winning the season opener at Sunshine Nationals just four months after being diagnosed with cancer.

The “Mac Daddy” will be back for DIRTcar Nationals and has a great chance to build off his victory.

In his last 10 races at Volusia Speedway Park, McDowell has a win, three top-fives, and five top-10s. The Chickamauga, GA driver is searching for his fourth DIRTcar Nationals win—his last coming in 2018.

He’ll also start on the outside pole of the held over 30-lap Feature from Sunshine Nationals.

Georgia Gator Hunt: Brandon Overton has accomplished a lot in his dirt Late Model career, including a 2021 season that may go unmatched.

Overton’s success on a half-mile track in 2021 is one for the record books, winning both Dirt Late Model Dream’s and the 51st World 100 at Eldora Speedway. He also grabbed his first DIRTcar National Feature win last season.

Around the Turn: The Most Powerful Late Models on the Planet make their first appearance at The Rev in Monroe, LA March 11-12. CLICK HERE for Tickets.