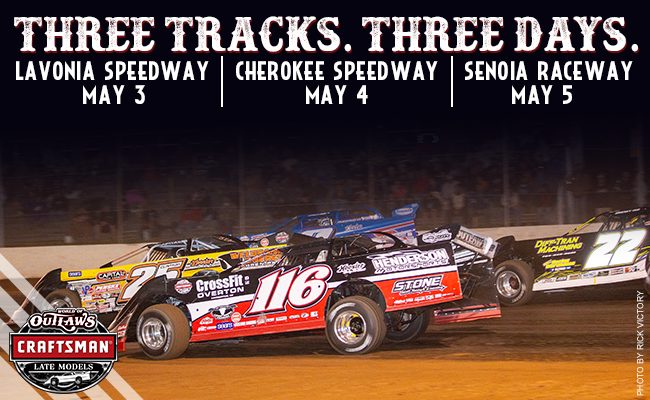 CONCORD, NC– May 1, 2018– The World of Outlaws Craftsman® Late Model Series continues its swing through the South this week with three stops at three separate tracks: Lavonia Speedway in Lavonia, GA on May 3; Cherokee Speedway in Gaffney, SC on May 4; and the annual Billy Clanton Classic at Senoia Raceway in Senoia, GA on May 5. The triple-header multi-track weekend will kick off a busy month of May for the World of Outlaws.

Georgia-natives Shane Clanton and Brandon Overton will be seeking their first Series win of the season with two chances in their home state this coming week. Clanton’s hometown Zebulon, GA is only three hours from Lavonia Speedway, whereas Overton — from Evans, GA  — is about an hour closer. This weekend will be the Series’ first and last stop in the state of Georgia this season.

The World of Outlaws makes its return to Lavonia Speedway’s 3/8-mile, semi-banked, clay oval for the first time since 2014 for a 50-lap, $10,000-to-win event. The last time the Series visited the track Darrell Lanigan, Tim McCreadie and Rick Eckert found their way to the podium.

The following day the World of Outlaws will head an hour and a half northeast to Cherokee Speedway in Gaffney, SC for another 50-lap, $10,000-to-win Craftsman Club Feature. The 3/8-mile dirt track is practically in the backyard of current points leader Chris Madden and his Barry Wright Race Cars House Car (BWRC) team. The BWRC shop is located only 14 miles from Cherokee Speedway. Madden has collected six top-five finishes, including one win, three second-place finishes and two third-place finishes.

While Madden certainly has the home advantage at Cherokee, don’t expect Clanton to go down without a fight. Last year, Shane Clanton collected his second win of the 2017 season at Cherokee Speedway, so he is especially looking forward to heading back in hopes of claiming his first win of 2018.

Whether or not he collects that win or not, Clanton will get his time in the limelight.

The triple-header weekend concludes at the fourth annual Billy Clanton Classic at Senoia Raceway on Saturday, May 5. This race honors Shane’s dad, the late Billy Clanton and his contributions to dirt track racing.

“From the time all of us siblings were born, racing has been in our blood,” said Shane. “My dad worked directly out of the back of our house, where he would build cars for customers. When we would get off the school bus, the first thing we wanted to do was head to the shop; we weren’t worried about doing our homework. The main thing he taught us was that you get out of it what you put into something. If you don’t put hard work into it, you won’t get anything out of it. If it wasn’t for my Dad, we probably wouldn’t be doing this.”

The Clanton family of six grew up going to Senoia Raceway on Friday nights. Over the years the track has been transformed from red-clay, to asphalt, back to red-clay, and now it consists of a unique “gray gumbo” surface. The current track allows for multiple lanes of racing and is constantly evolving throughout the night.

During the Series inaugural visit to the 3/8-mile bullring, Shane finished fourth behind Eric Wells (third), Tyler Erb (second) and Brandon Sheppard (first). Shane spoke with Series announcer Rick Eshelman on the track after the race: “It’s hard to be up here, him not being with me, and he has been gone for a couple of years now,” said Clanton in front of the fans at Senoia. “As long as we can live his life like we’re doing and just honor him as much as we can. He’s done a lot for the racing in the Southeast. It’s an honor to be here tonight.”

Tickets for Lavonia and Cherokee will be for sale at the track on the day of the event. Tickets for the Billy Clanton Classic at Senoia Raceway on May 5 are on sale now, both reserved seats and general admission. Once you purchase your tickets you can print them directly at home or send them to your mobile device!