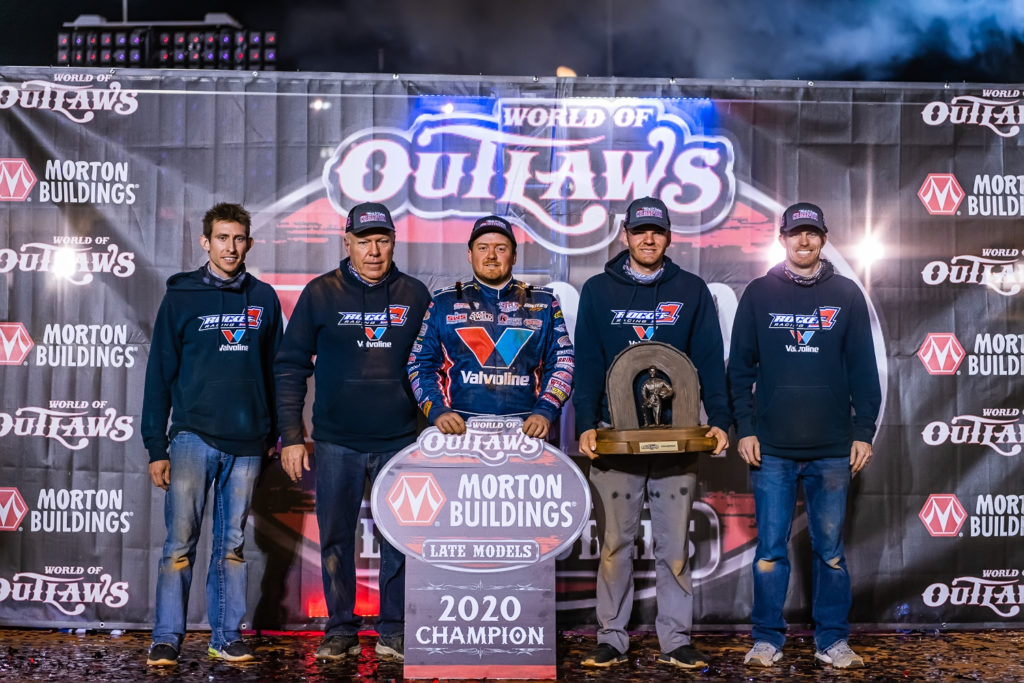 Teamwork makes the dream work. There’s no “I” in team. The cliches run on and on, but they all ring true for Rocket1 Racing.

A five-headed monster since coming together in late 2016, this modern-day dynasty built by Mark Richards in Shinnston, West Virginia is simply incomparable. This week, while Brandon Sheppard earned his third drivers championship, Richards collected his seventh owners title with the World of Outlaws Morton Buildings Late Model Series, making him by far and away the winningest owner this series has ever seen.

With crew chief Danny White, tire guru Austin Hargrove, jack-of-all-trades Joel Rogers on the road and in the shop, the No. 1 Durham Racing Engines powered Rocket Chassis is a well-oiled machine for all 12 months.

“Without a doubt, I would not be here without my guys,” Richards noted on Danny, Austin & Joel. “They make my life so much easier. Having a crew like we have put together here lessens the load when we’re going up and down the road as much as we do.”

While Mark Richards has been spearheading the Rocket Chassis operation alongside Steve Baker since 1991, this current core didn’t come full circle until 2017 when Sheppard officially came on as the Rocket1 house car driver. B-Shepp, a then 24-year old boy from New Berlin, Illinois, was the final piece of the puzzle.

Crew Chief Danny White of Dubuque, Iowa is the longest tenured of the three crew members, joining Rocket1 in April of 2014. A now five-time champion in the World of Outlaws Morton Buildings Late Model Series, White has been on title teams with Rick Eckert in 2011, Josh Richards in 2016, and Brandon Sheppard in 2017, 2019 and 2020.

Manning the body and tires, Austin Hargrove of Paducah, Kentucky entered the picture in November of 2016. A former World 100 winner as part of Bart Hartman’s 2009 conquest, Hargrove experienced his fair share of success before aligning with Rocket and ensuing to set the world on fire.

The youngest man on the crew, Joel Rogers of Fairmount, West Virginia joined Rocket just days after Hargrove in November of 2016 at the age of 18 years old. At 22 now, the jack-of-all-trades is now a three-time World of Outlaws champion and accomplished world traveler.

“We know what we all expect from each other and we all know what needs to be done and how we gotta do it,” Sheppard noted on the team dynamic. “I absolutely believe it’s an advantage for us, being together so long. Of course, Mark being experienced as he is and having notebooks for everywhere we go. That’s the biggest thing: we’ve all got a lot of experience. Even Joel, who is as young as he is, has been up and down the road to quite a few tracks. Austin has won a lot of races with a lot of guys and so has Danny.”

Akin to Bill Belichick’s New England Patriots’ kingdom or Nick Saban’s run with Alabama Rolling Tide, Mark Richards has established himself as a dynasty builder and career maker. The flawlessly ran operation is evident from the pristine shop back in Shinnston to the perfectly maintained car and trailer on the road.

The case of a grew crew being behind every great driver couldn’t be more true than with Brandon Sheppard backed by Rocket1 Racing and Mark, Danny, Austin & Joel.

The bad news for the competition? They’re all coming back.

In 2021, Richards will pursue his eighth owners championship as Sheppard chases his fourth drivers title with Danny, Austin and Joel in the pits at every race.