The Firecracker 100 Weekend is Here 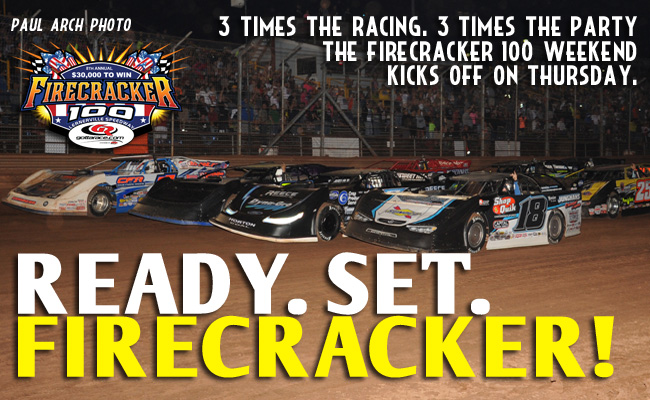 The Firecracker 100 Weekend Is Here

SARVER, Pa. – June 22, 2016 – The final countdown is on until the Firecracker 100 kicks off at Lernerville Speedway. Three days of racing and three times the party starts on Thursday, June 23 and continues until Saturday, June 25.

“I’m really looking forward to going back to Lernerville this year,” Richards said. “I made my first World of Outlaws career start there, and it’s two hours from home. It’s been just a really great racetrack for us.”

Richards has also found success at the Firecracker. In 2013, he swept the weekend’s three feature events.

“We’re going to try to do it again this year. It’s an awesome race, they do a great job with the fans, with the track and the whole facility there. It’s just a great atmosphere.”

For Brian Shirley, touring full-time with the World of Outlaws has given him the chance to take on a number of tracks he has not been to in a while. Lernerville is one of those places

“Now that it’s a three-day event it’s pretty cool because you can try a couple different things to get ready for the big race,” said Shirley, who is currently fifth in the championship standings.

Expected to join Richards, Shirley and the other World of Outlaws Craftsman® Late Model Series regulars, are former series champions Darrell Lanigan and Tim McCreadie as well as Jonathan Davenport and Dale McDowell, among others.

In addition to three complete races, the Firecracker weekend features three days of entertainment. On Thursday, after the race, the Froggy Hometown Country Tour will take the concert stage with Farewell Angelina and hometown acts Gabby Barrett and Michael Christopher.

In addition to the Firecracker 100 finale, Saturday will feature the fan/driver horseshoe and cornhole tournaments at noon followed by a driver autograph session at 4 p.m.

For more information and to learn how to purchase tickets to the Firecracker 100 Weekend, visit WoOLMS.com/Firecracker-100.