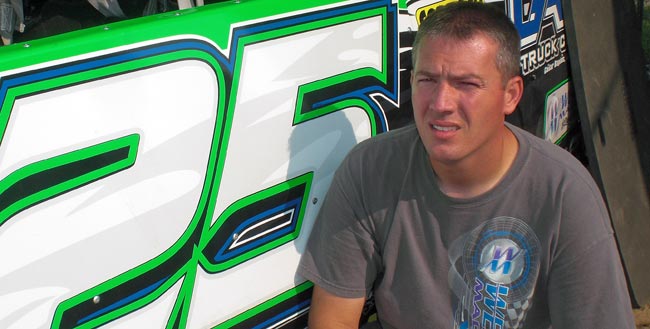 While Simpson, 33, has never competed regularly at Independence, the three-eighths-mile oval is just over a 30-minute drive from his home in Mt. Vernon, Iowa. That location gives him even more incentive to pull off a triumph that would rank as one of the biggest of his already impressive eight-year career in the dirt Late Model division.

“It would mean so much if we could get our first World of Outlaws win at a track close to home like Independence,” said Simpson, who has made less than a dozen starts at the central Iowa track. “It seems these days that open (motor) Late Model racing is getting farther and farther away from Iowa. We just don’t get a chance to run many big (open) shows in our own state anymore, so anytime we can run an Outlaw show a half-hour from our house, it’s a big deal.

“My family and friends will have a chance now to come watch us, and a lot of our sponsors are local so that’s cool too. All of our sponsors are definitely big supporters of us running out on the road, but they love it when we’re close to home and can come see us.”

The promoter of Monday night’s $10,000-to-win Dirt Late Model Magazine 50 understands how important a WoO LMS event in the Hawkeye State is for home-grown drivers like Simpson. It’s the reason Rick Hartzell, who fields a dirt Late Model that his wife, Jill George of Cedar Falls, has run on much of the WoO LMS for the past three seasons, decided to dip into the promotional realm for the first time last year by leasing Independence to present a historic World of Outlaws program.

“Open-motor Late Model in Iowa has been so strong and has such great history,” said Hartzell, 58, who served as the Athletic Director of his hometown’s University of Northern Iowa from 1999-2008 and today makes his living officiating nearly NCAA Division I men’s basketball games. “Scott Bloomquist and Billy Moyer were born in Iowa. Ed Sanger (of Waterloo, N.Y.) and Brian Birkhofer of (Muscatine, Iowa) have won the World 100 (at Ohio’s Eldora Speedway). There are so many guys like that who have made open-motor racing in Iowa so great.

“My one goal for promoting this World of Outlaws race is to try to keep open-motor alive in Iowa. I just want to give the fans here an opportunity to see the best drivers in the country come to the area and give the great Iowa drivers like the Simpson brothers (Chad’s younger brother, Chris, 28, is also a rising dirt Late Model driver and an ’09 Corn Belt Clash winner at Independence), Jason Rauen and Tyler Bruening a chance to compete in a national-level event in front of their families and friends.”

The married father of two (a daughter and son) has also made his presence known in limited WoO LMS competition. He’s entered 12 tour events since 2005 and qualified for 10 A-Mains. His best finish came on July 13, 2011, when he finished fourth in the NAPA Auto Parts ‘Gopher 50’ at Deer Creek Speedway in Spring Valley, Minn., but his most memorable performance came less than a month later when he made a serious bid for victory at Shawano (Wis.) Speedway.

Taking advantage of an outside-pole starting spot, Simpson led the first 25 laps of Shawano’s 50-lap A-Main. He was overtaken by eventual winner Darrell Lanigan of Union, Ky., but held strong in second place until broken rearend gears forced him to retire with just two laps remaining.

“That was a big disappointment,” said Simpson, who settled for a 17th-place finish at Shawano. “I felt real comfortable there because the track’s a big half-mile like the places I grew up racing, but we just didn’t have any luck.”

Simpson experienced more misfortune in last year’s inaugural WoO LMS event at Independence. He was quickest in qualifying to earn his first-ever fast-time honor with the circuit, but while running at the back end of the top 10 midway through the A-Main he was swept up in a multi-car tangle that left him with a 20th-place finish.

“We were pretty good last year (at Independence) but we have to be better this time,” said Simpson, who has reached Victory Lane at the track in the past in Indy Open Series events. “We’ve usually run fairly decent there, but we haven’t been there this year. We’ve heard from a lot of local guys there that they’ve been keeping it pretty wet early in the night and the track’s been pretty decent so we’re looking forward to it.”

Simpson will carry some momentum into the Independence show. He’s just over one week removed from his first wins of 2012, which came in Corn Belt Clash Series events on July 26 at C.J. Speedway in Columbus Junction, Iowa, and July 27 at Fayette County Speedway in West Union, Iowa. He also registered his second career WoO LMS fast-time award on July 7 at Deer Creek and finished ninth in the ‘Gopher 50.’

“Early in the year we had some breakdowns, but our stuff has been coming around,” said Simpson, who drives ProPower-equipped MasterSbilt cars fielded by Bud and Denise Brinkman of Marion, Iowa. “For the most part, we have everything in line now. We’ve gotten some help the last couple weeks from Huey (Wilcoxon), who sells the MasterSbilt by Huey cars out east, and we’re getting better and better. I think we’re ready to go.”

Simpson knows that bagging an elusive WoO LMS victory at Independence will take a supreme effort.

“We’re gonna give it our best shot. Hopefully we’ll have a little luck and we can finish near the front.”

Simpson will challenge a star-studded field of WoO LMS travelers headed by former champions Lanigan, who has already established a new modern-era (2004-present) single-season win record in 2012; Rick Eckert of York, Pa., who finished second in last year’s event at Independence; and Tim McCreadie of Watertown, N.Y., who was knocked out of Independence’s ’11 A-Main by a crash.

Drivers expected to pace the Iowa contingent in Monday’s program include the Simpson brothers, Birkhofer, Farley’s Rauen, Decorah’s Bruening and George, the lady racer who will compete in front of many family members, friends and general acquaintances at a facility she considers her home track. Other racers with plans to compete include transplanted Iowan Billy Moyer of Batesville, Ark.; Moyer’s rising son, Billy Jr.; Don O’Neal of Martinsville, Ind., who finished third in last year’s WoO LMS event; and Illinois standouts Dennis Erb Jr. of Carpentersville, Jason Feger of Bloomington, Brandon Sheppard of New Berlin and Frankie Heckenast Jr. of Orland Park.

Gates for Monday’s program, which also includes the $1,000-to-win Dirt Modified Magazine 25 for the IMCA Modifieds, are scheduled to open at 4 p.m. Hot laps are set for 6:45 p.m. with qualifying to follow.

Fans wishing to purchase grandstand tickets for the WoO LMS event in advance will be able to do so during Independence’s regular weekly show on Sat., Aug. 4, at the main ticket gates.

For more information contact Rick Hartzell at 319-415-9330 or by e-mail at [email protected] Details are also available at www.independencemotorspeedway.com.