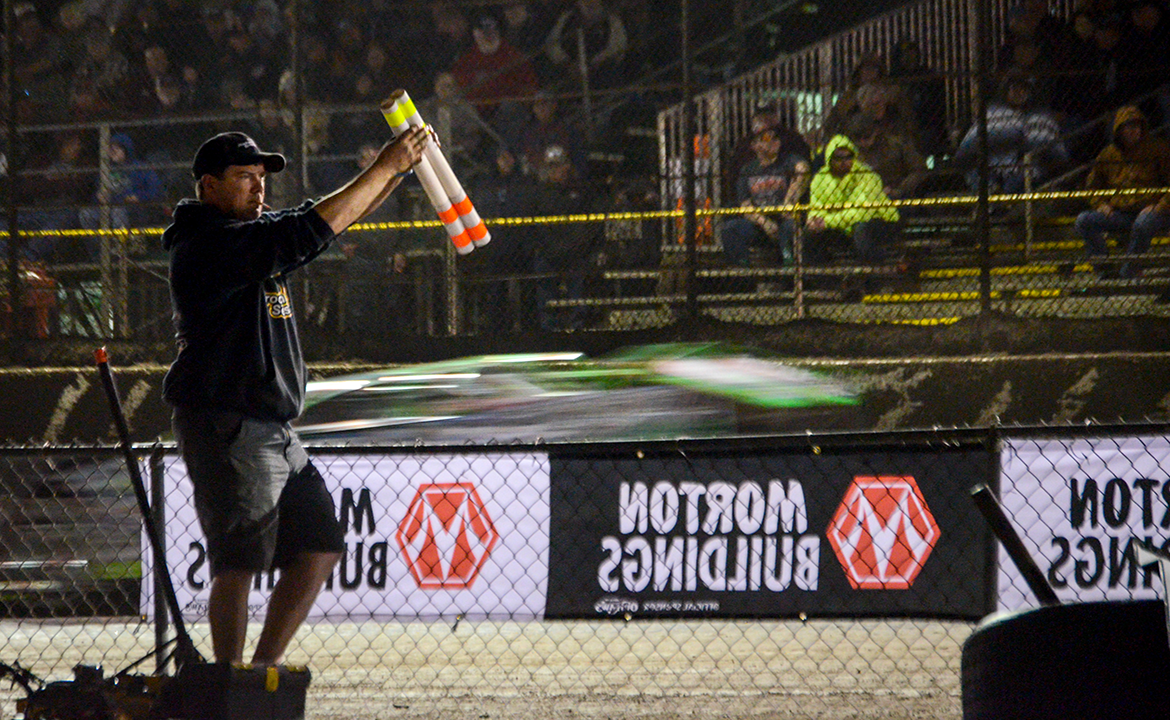 CONCORD, NC — Race communication. It’s a debate topic as old as in-car radios themselves. Some forms of auto racing have long permitted the use of two-way radio communication between driver and crew. In the past, NASCAR has even gone so far as experimenting with driver-to-driver radio communication. But when it comes to the World of Outlaws and many other forms of grassroots auto racing, almost all teams and drivers agree: it’s best to just keep things simple.

Simple — meaning only limited forms of driver-to-crew communication are permitted, such as hand signals, verbal transmission in the work area or the ever-popular “signal sticks” fans may see in use by crew members in the infield during the final race of the evening.

Best put by Weiss Racing crew chief Shawn Gage, “The relationship with the driver is huge. Obviously, we don’t get radios. You see NASCAR, they get to talk directly to their driver, calm them down and let them know how much quicker they are than other drivers. That’s something we try to do with our hands or sticks.”

Be on the lookout for those brightly colored sticks, pipes or paddles being pointed at the drivers in the next Morton Buildings Feature. Each team has its own color combinations and specific motions that indicate different things at any point in the race. Typically, crew members use them to tell their driver how big of a gap there is to the car behind them, most often shown to the leader.

Darrell Lanigan Racing crew member Adam Logan has been turning wrenches on the familiar black #29 for over three seasons and is no stranger to giving his three-time Series champion driver signals while he’s got the lead. He explained that the primary use of his neon sticks is simply to let Darrell know if anyone’s on his tail and whether or not they’re closing the gap.

“If Darrell wants to make a pass on somebody or if he’s worried about a lapped car, at least he knows if he has a big lead and gets into the corner too hot, or has to get around a lapped car, he doesn’t have to worry about someone sticking their nose in on him,” Logan said.

Gage has some of the flashiest and tallest sticks in the pit area and said he and driver Ricky Weiss have several uses for them. One of which coincides with showing the gap between cars, but for a different reason.

Extended races on rougher track surfaces, or ones that are more prone to tire rubber accumulation, can result in increased tire wear and/or decreased component life. Signal sticks can be used to minimize this by telling a driver to take it easier or pick it up if necessary, especially when the pressure’s coming from the field behind.

“Any time you can take a break, say you’re in the lead by half of a track, you want to slow these things down a little bit,” Gage said. “Our parts are good, but you just don’t want to take advantage of them any more than you have to out on these racetracks that we’re on.”

And while saving tires under green can be a difficult task for any driver, the veterans will always know how to conserve the best.

“Darrell knows how to maintain his tires, he knows how to keep his nose clean,” Logan said. “He’s been doing this for years, a three-time World of Outlaws champion. So, I don’t have to worry about him saving his racecar.”

Aside from those signals, sticks can also be used to tell a driver to move up or down on the racetrack, in an effort to block traffic from behind or adapt to changing track conditions. In certain situations, the leader can be thought of as a “sitting duck.” When track conditions change, the cars further back can see that and exploit it to make their push to the front.

“We could be leading or running second, and our car is good and we’re maintaining position,” Logan explained. “But all of a sudden you start watching the track change. Well, the driver doesn’t know that. They don’t see the track change and soon, fifth and sixth becomes first and second.”

However, all of these aids to keep a driver out front do not come without their potential downsides…

Shortly after Chase Junghans saw the halfway signal from the flagman while leading at Duck River Raceway Park back in March, Brandon Sheppard made his move to the outside heading into turn one and held the line all the way down the backstretch to take the lead into turn three. Sheppard carried this lead through the final 25 laps to win his fifth World of Outlaws Morton Buildings Late Model Series race in a row, much to the frustration to the ShopQuik #18 team.

In the eyes of ShopQuik Racing crew member Vinny Guliani, the team’s signals given to Junghans shortly before he got passed to protect the bottom lane on the track may have been a contributing factor.

“I was worried we were slipping out higher and higher and my thought process was to protect the bottom,” Guliani said. “If [Sheppard] is good enough to drive around us on the top, more power to him.”

And the Rocket1 Racing car did just that.

“I’ll take the blame on that one, I told him to move down,” Guliani added. “Our crew chief Corey Richman always does a great job signaling with the sticks. So, if I could have done it over, I would have let the race play out without my input.”

Junghans showed his displeasure with the signal immediately upon parking beside Victory Lane, despite a strong showing in second place. But in the end, Guliani said sometimes, that’s just what happens in racing.

Another unfortunate side-effect of giving signals has to do with drivers looking out for them too much and inadvertently causing other incidents.

“I’ve seen multiple instances already this year where a guy just changes his line abruptly on a straight-away. And, he doesn’t wreck anybody, but the guy right behind him just gets all the air taken off of his car and ends up in the wall,” Guliani said.

On the other side of Dirt Late Model racing are the stars of the asphalt world, many of whom have been accustomed to using in-car radios during any given race. But for the veterans of dirt racing, the consensus is that radios just aren’t necessary.

“At that point, you’ll have coaches,” Gage said. “You’re not going to have drivers, you’re going to have people coaching kids how to do it, when to brake and when to gas. Real talent is what you see on the track today.”

“I think the general consensus would be against radios,” Guliani said. “I do think that it would make for a little bit less passing, and we’re already seeing that with drivers that realize they’ve got to watch their signal guys as much as they can.”

“We are a professional group, and this is what we do for a living,” Logan said. “But at the end of the day, I think that the big appeal to dirt racing is that it’s grassroots. So I don’t want radios, I just don’t think it’s needed.

“We don’t really have to use them,” he continued. “We’ve got 50 laps, and what you’ve got when you roll out onto the track is what you’ve got for the whole race. We just go hammer-down.”

UP NEXT…
The Outlaws kick off a busy month of May next weekend at Cherokee Speedway and Lavonia Speedway on May 3-4, then head to North Carolina for the FIrst in Flight 100 at Fayetteville Motor Speedway on May 10-11. Watch every lap LIVE on DIRTVision!

For more info about the race at Cherokee Speedway, click here.