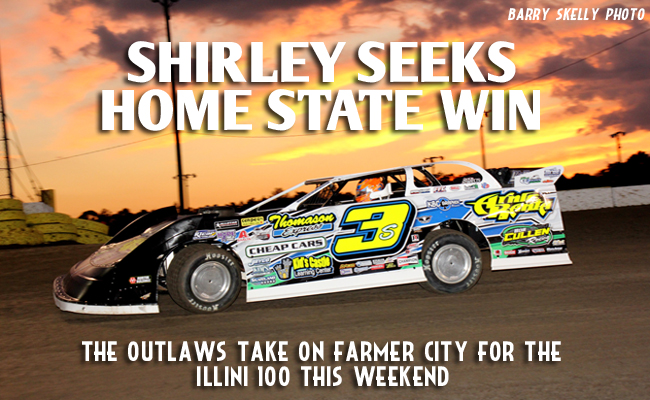 FARMER CITY, Ill. – March 30, 2016 – Since Brian Shirley was eight years-old, all he thought about was motorcycles. At the time, it did not cross his mind that he would someday sink into the seat of a late model. But, all that matters to him now is that it feels like home.

“If I told you who my hero was growing up, you guys would be like, ‘who?'” said Shirley, who idolized motorcyclists throughout his two-wheeled career. “It’s kind of weird, my desire to win really focused me to be a better race car driver than anything.”

Shirley is coming home with that very desire to win.

The Illinois-native will be trying for his first win on the World of Outlaws Craftsman® Late Model Series circuit at Farmer City Raceway – less than 100 miles from his hometown in Chatham. In 2015, Shirley placed second in the feature event. But, he feels his team is in the position to win on his “stomping grounds” this time.

“I don’t think we could go into a race as confident at a place we don’t know,” Shirley said. “It’s a place where you can read the changes throughout the night because you’ve been there so many times.”

Shirley’s rookie year with the series was in 2007, but he has competed at the track for about 15 years; he couldn’t tell you exact number of wins he’s accumulated there in all his years racing. But never the Illini 100. He will not only be seeking his first Douglas Dodge Ram Illini 100 victory, but also his first win of the 2016 season. He is currently ranked third in the points race.

“Shoot, I’m guessing we’ve won there anywhere from 12 to 16 times,” Shirley said. “When you get the World of Outlaw guys coming in, we take pride in how fast and how tough we are. We just do our best to represent our state against the guys who are the best.”

Shirley attributes some of his motivation to the fans in the grandstands – those packing the seats to watch “the best go at it.” The other driving force is satisfying a desire he once thought was lost.

In 1999, Shirley suffered an unfortunate wrist injury that ended his successful career in professional flat-track racing. He initially thought his racing days were behind him – until he hopped into a late model. He missed exceeding the triple-digit speeds – the reason why he got the nickname “Squirrel” – and late models filled the void of adrenaline he was longing to feel again.

“It’s fast, it’s got horsepower…I mean it has to be challenging and rewarding,” Shirley said. “It’s something about the four wheels that covers up the flame, the burning desire that you have. It’s the part of my life I need. I’m a racer.”

Shirley did not have idols in the four-wheeled realm let alone knew the legends of the sport; he sees it as an opportunity to blaze his own trail. But, whenever he gets the chance to race at Florence Speedway in Union, Ky., he visits the National Dirt Late Model Hall of Fame. He studies the sport constantly, respecting the feats of those before him and looking forward to the mark he will make from his career.

“We need to take advantage of this time,” Shirley said. “Whether it’s racing cars or motorcycles, I have the desire to win. I think right now we’re definitely running on all eight cylinders, and we have the opportunity to make the best of this weekend.”

The World of Outlaws Craftsman Late Model Series will be in Farmer City, Ill. for the Douglas Dodge Ram Illini 100 from March 31 to April 2. Practice is scheduled for the first day, while the succeeding days will hold feature events for the title. Tickets are available at the gate, by calling 844-DIRT-TIX (347-8849), or by visiting WorldofOutlaws.com/Tickets.