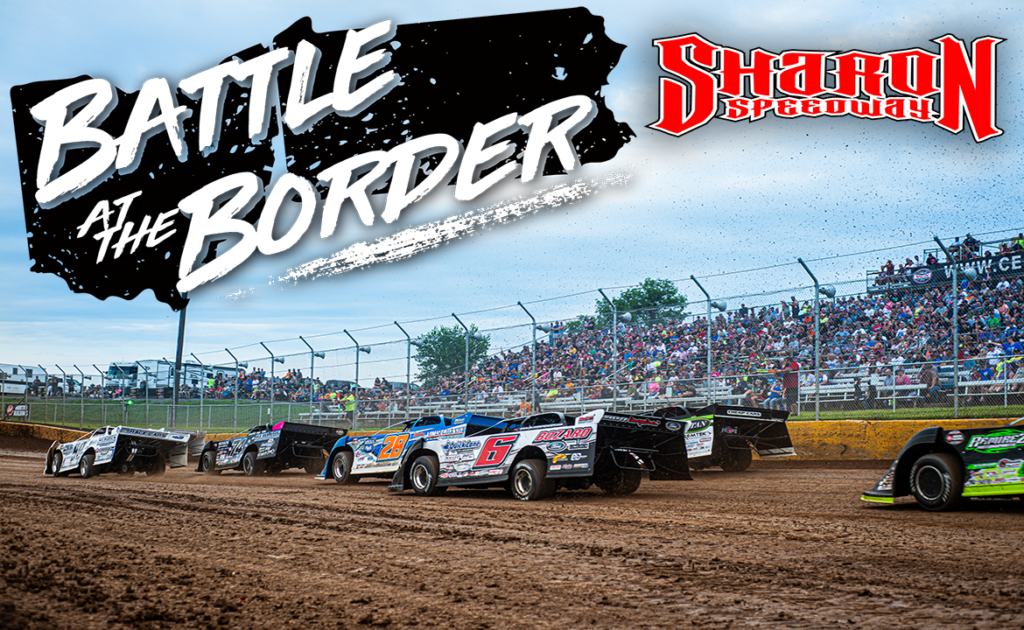 Ohio and Pennsylvania racers will converge on Sharon Speedway to take on the World of Outlaws Morton Buildings Late Model Series superstars Friday and Saturday, Aug. 30-31, in the inaugural Battle at the Border.

This new and exciting event will kick off on Friday night with a full show, complete with PFC Brakes Fast Time Award Qualifying, Drydene Heat races, Last Chance Showdowns and a 25-lap, $6,000-to-win Morton Buildings Feature. A pit party with a live DJ and bonfire will take place after Friday’s racing program has concluded.

Saturday’s events will proceed with the same qualifying event format as Friday, but the night concludes with a huge 75-lap, $15,000-to-win Battle at the Border main event, marking the third and final Series race in Ohio this season.

The very first World of Outlaws event contested at Sharon was in June 2004, when Latrobe, PA’s Davey Johnson took home the top prize, setting the precedent for six future annual visits to the facility before the streak halted in 2010. Through those seven contested races, no driver has won more than once. Of the seven winning drivers, five were once full-time members of the World of Outlaws roster and one still remains. In fact, he’s returned to the tour this year in his own Club 29 Chassis equipment – the 2008, 2012 and 2014 Series Champion from Union, KY, Darrell Lanigan.

Lanigan has had plenty of solid finishes so far this year but has not been able to reach Victory Lane through the first 31 races. He currently sits fifth in the Series points standings with a third-best 13 top-five finishes, 300 points out of first place. “The Bluegrass Bandit” took the victory in the most recent visit to Sharon in 2010, and with numerous years of experience behind the wheel, look for the three-time champion to buckle down and head for the front next weekend.

Brandon Sheppard, the 2017 Series Champion and current point leader, has had a season for the record books, amassing 16 wins, 29 top-fives and 30 top-10s in 31 starts. He’s certainly had no shortage of marquee victories over the past six months either, including all four DIRTcar Nationals Features and the overall crown, Illini 100, Prairie Dirt Classic and Eldora Speedway’s prestigious Dirt Late Model Dream. He’s ahead of pace to break the all-time World of Outlaws single-season wins record of 18, held by himself and his predecessor in the Rocket1 Racing ride, Josh Richards.

Rookie of the Year frontrunner Ricky Weiss, of Headingley, Manitoba, currently sits second in points, 234 points behind Sheppard with a second-best 10 podium finishes. Still looking for his first tour victory, “Slick Rick” has been stellar as of late, collecting three straight top-five finishes. Shane Clanton, of Zebulon, GA, has three victories on tour this season and sits third in points, 28 points behind Weiss.

Chase Junghans, of Manhattan, KS, picked up a win back in mid-July in the Series debut at Red Cedar Speedway, holding onto fourth position in overall points. Lanigan rounds out the top five.

Joining the Outlaws at Sharon next Friday will be the stars and cars of the RUSH Sportsman Modified Series; Saturday’s guests will be Elite Econo Mods. Local Super Late Model competition expected to be in action as well includes Max Blair, Rob Anderzack, Jared Miley, Charles Powell and Doug Drown. Start time on both nights is 6:30 p.m.

Tickets for the Battle at the Border at Sharon Speedway can be purchased at the track on race day or in advance at sharonspeedway.simpletix.com. For more information, call (330) 772-5481.

Through the Lens: Sharon Speedway