Season’s End – A Finale on The Dirt Track 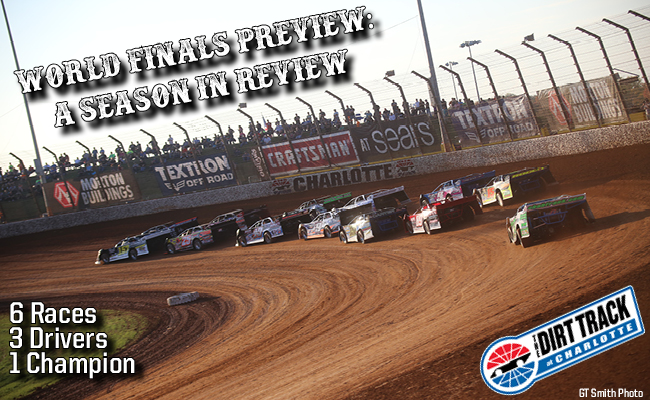 Only six races remain on the schedule, but the action is far from over as the Series prepares for Charlotte

CONCORD, NC – Sept. 15, 2018 – It’s been a long and grueling season for the World of Outlaws Craftsman Late Models, traveling to 28 tracks across 18 different states for a total of 36 races. Of the 49 events on the official Series schedule, seven were cancelled by inclement weather or scheduling conflicts, 36 have been completed and only six remain.

The Series resumes racing after a whole month off on September 21, when the Outlaws make their debut at the appropriately-named Outlaw Speedway. A 50-lap feature will headline day one of the track’s annual Fall Nationals event, accompanying the sportsman and street stock classes.

Selinsgrove Speedway’s 20th annual Late Model National Open will follow the Outlaw Speedway show. 2015 was the last time an Outlaw picked up the victory, as Billy Moyer Jr. scored the win over a full field at the half-mile red clay oval.

Atomic Speedway’s Outlaw Invasion was rained-out back in May; the rescheduled dates follow the Outlaw/Selinsgrove weekend. September 28 and 29 will see racing once again in Chillicothe – look for Devin Moran to build on the success he experienced in 2017, as he won last year’s contest at the three-eighths mile.

The Chi-Town Showdown would have been the next and only event in October for the Series, but that was cancelled, as the Series decided to do so in observance of the World 100’s rescheduling at Eldora Speedway for October 12 and 13. However, the Series does have plans to return to The Dirt Oval at Route 66 in 2019.

The World of Outlaws World Finals will wrap up the 2018 tour schedule in Charlotte for what should be a very exciting end to the season, as the season-long points battle between Chris Madden, Mike Marlar and Brandon Sheppard will be decided over the last two races at The Dirt Track. As of the last race at Eriez, the top three are separated by only 30 points, which will change before the Series makes its final stop.

In only his second full-time year on the tour, current points leader Chris Madden would love nothing more than to hold off Defending Series Champion Brandon Sheppard, after finishing runner-up to him last season. Madden has amassed 7 feature wins so far in 2018, and has been very consistent over the last stretch of racing. Look for him to carry that momentum into Outlaw Speedway with a chance to extend his points lead once again.

In his very first season as a full-time competitor on the World of Outlaws circuit, Mike Marlar has already exceeded expectations and thoroughly enjoyed his first go on a national tour.

“It’s been very enjoyable,” Marlar said. “We’ve been able to take one big vacation-slash-racing trip. We got to travel around and go to a lot of places we didn’t get to go to or race at ever. It’s just been a really fun year.”

The Delk Equipment team has bagged 5 feature wins this season, along with 24 top-5s and 31 top-10s to put him just 22 points out of the lead. Heading into the final stretch of the season, Marlar said he aims to just stay consistent and worry only about the things he’s in control of.

“We’re just trying to be consistent all the time and have good results, just knowing that we’re points racing.” Marlar said. “Hopefully, we’ll get down to the last weekend and be in contention so that [we] can just go for it and try to settle it there.”

It’s always a bonus to be in a position to win a championship in the first year of competition, but the added pressure can sometimes get to people. Marlar said he’s doing his best not to get rattled, knowing one slip-up could cost him a chance at the title.

“I think people try to not be over-pressured by it,” Marlar said. “But at the same time, you’ve got to be honest that it’s a lot of pressure on you because you’ve put a year of your life into a goal. For us, we’ll be happy with doing our best. And if our best is winning or third, we’ll be happy either way.”

Defending Series Champion Brandon Sheppard has had yet another victory-filled season behind the wheel of the Mark Richards Racing Valvoline No. 1. With 11 wins amassed, by far the most of any Series entrant, and 26 top-5s, Sheppard now sits only 30 points behind Madden in the standings. A few misfortunes in feature action throughout the season has hindered his point total slightly, but there’s still plenty of time to make it up.

Sheppard won the Friday night show at Charlotte last season; look for he and the rest of his team to bring their A-game right up through Charlotte.

Like Marlar, another new-to-the-Series and Late Model veteran, Series Director Matt Curl, drew a lot of positives from the 2018 World of Outlaws campaign.

“I’ve had a lot of resources and support from our entire World Racing Group staff,” Curl said. “That has allowed us to have a very successful World of Outlaws season to date.”

With every new position comes a laundry list of new experiences to be had, adjustments to be made and lessons to be learned. This season has been no exception.

“We have a few events left to go, but I’ve learned a lot about racing through the country,” Curl said. “The over-the-road experience and working with a number of different promoters and regions and tracks has been very interesting to me.”

“I think this year has been a very good building block for us to continue this success,” Curl said. “I felt like we brought another chapter into building events with promoters and hands-on promotion with a number of tracks.”

Improvements to both the fan experience and the racing schedule are among the 2019 campaign efforts already being worked on, Curl added. More specifically, bringing the action to tracks the Series has never been to or those that deserve more widespread attention. Essentially, creating a “racier” schedule, where drivers know they can come from the back and win, is what Curl and the rest of the World of Outlaws team strives to do.

Tickets for the World of Outlaws World Finals at The Dirt Track in Charlotte, NC are on sale now! Click here for more information.

Can’t make it to the track? Don’t miss a moment of the home stretch of the 2018 Outlaw season! Follow the Series on Twitter @WoOLateModels or listen in on DIRTVision’s live audio feed at www.dirtvision.com!

ROAD TO CHARLOTTE: Gustin Looks Back on Rookie Season with World of Outlaws