Rocky Road ahead for Smooth Operator 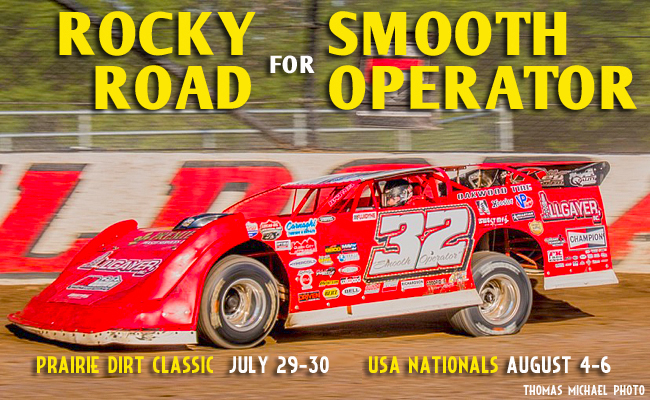 Rocky Road ahead for Smooth Operator

CONCORD, N.C. – July 25, 2016 – Second place was not the first loser in this instance. Rather, Bobby Pierce’s runner-up finish at Oakshade Raceway (Ohio) July 16 was enough for him to secure his second DIRTcar Summer Nationals Championship.

By the numbers Pierce dominated, winning nearly half the feature events (10 of 22) in a two-month span. Pierce, claiming his second consecutive championship, became the first repeat Summer Nationals champion since 2009. He is the fifth driver in Summer Nationals history to cross over the double-digit win mark.

“It was really cool winning it again,” Pierce said. “How good it went, it made it simple. It’s still the ‘Hell Tour’ for sure. It took a lot of hard work keeping the car together. There are a lot of Illinois guys that are good at those tracks and the same thing when we ventured out of the state. It’s a tough deal, especially keeping everything up and running.”

Following a season when he scored three of the five weekly Summer Nationals championships and finished in the top 10 in all but two shows, the “Smooth Operator” will test an even tougher terrain against the 15 World of Outlaws Craftsman® Late Model Series drivers and company. Pierce will compete at two of the Outlaws’ marquee events this season, the Prairie Dirt Classic and USA Nationals.

The Prairie Dirt Classic at Fairbury Speedway (Ill.) will be two days of bumper-to-bumper action in front an anticipated standing room only crowd. Pierce brings track experience to Fairbury. He placed third in the event in 2013, which was the Outlaw’s inaugural year to the event. Pierce started 17th that night and led more than half the race.

Most recently, Pierce has had two polarizing shots at the track. Though Pierce placed eighth in July’s Summer National’s stop, he won the $10,000-to-win FALS Frenzy earlier in May. Pierce will seek to double-up on his successes, breaking the tie in his favor with another win.

“We’ve been on a pretty good hot streak, and hopefully we can keep that rolling,” said Pierce after locking up a championship. “But there will be a lot of tough competition there. We’ve never been able to get an Outlaw race so heck yeah, that’s a motivator. I guess I’ll just have to try harder.”

The Oakwood, Ill. native will play sheriff to the Outlaws in front of his home crowd at Fairbury, which is just 80 miles south from him. It will be a classic Midwestern stare-down between Pierce and the Outlaws to be decided Friday, July 29 and finally with the 100-lap main event Saturday, July 30.

Pierce has played second fiddle to the cast of Outlaws in the past, most recently finishing second to three-time series champion Josh Richards at Farmer City Raceway (Ill.) in April. More notably, Pierce placed second at USA Nationals in 2014. His streak of seconds outside of his Summer Nationals accolades will be a trend he hopes to break when running beside the Outlaws.

The USA Nationals at Cedar Lake Speedway (Wis.) will be another opportunity from Thursday, August 4 to Saturday, August 6. Both are alike in that they will be challenging, said Pierce. Pierce won the Summer Nationals tour by more than 200 points this season, but he expects the margins to be much closer. The “high car counts and competition” will up the ante after having a runaway season, so preparation – similar to his Summer Nationals plan of action – is a key variable for both multi-day events.

“We have some time to get the cars ready,” Pierce said. “I’ll be ready for Fairbury and Cedar Lake.”

Cedar Lake Speedway traditionally requires a harder tire, which actually gives him a little comfort. Though a harder tire naturally provides less grip, Pierce is confident that he and his team can make the essential changes so the car is not “driving off the other three tires” all throughout the night. During Summer Nationals, the options for the right rear tire are vast; this particular event zeros in on one spec, which he feels will make adjusting “a lot simpler.”

Pierce embraces the upcoming challenges, with hopes of eventually testing his strength on late model racing’s biggest stages on a consistent basis. It just means more time and sponsorship; he has plenty of drive to get there. On the forefront though, he just wants a clear path to the checkers within the next few weeks. It may foreshadow what is to come for the 20-year-old.

“I’ve thought about [competing full time] before,” Pierce said. “We’re just waiting and seeing. It would be a cool deal to run the World of Outlaws. The money and points system is really cool. Maybe in the future…maybe in the near future…you never know.”