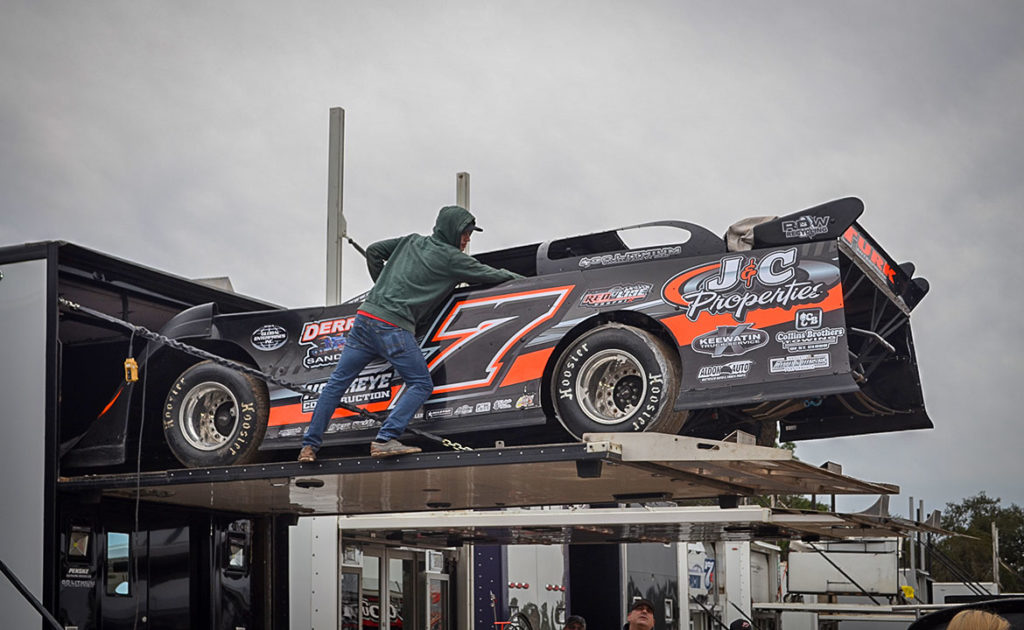 CONCORD, NC – Life on the road with a World of Outlaws Morton Buildings Late Model Series race team is always challenging. Very rarely do drivers ever race at a track near their shop, house or hometown.

This weekend, teams from all over the Midwest and East Coast will converge on Tennessee for Friday’s event at Duck River Raceway Park and Saturday’s race at Smoky Mountain Speedway.

Chase Junghans, his crew chief Corey Richman and the rest of the ShopQuik No. 18 team travels from Manhattan, KS, and they’re having their best start to a World of Outlaws season with three top-five finishes already this year after having five all last season. Success always helps ease the constant struggle, but the challenges remain.

The long hours on the road, lack of sleep and multiple fast food meals can really wear a small race team out over the course of a 9-month season. But the friends made at the track and the sense of a family bond found inside of a race hauler between the team members is like none other. The glory a team shares seeing their car roll into Victory Lane at the end of a hard-fought night of racing, and the ability to show up to an unfamiliar track and perform well are just a few of the many incentives for the drivers and crews to stay in the sport as long as they do.

Richman has been a dirt racing crew member for several years. Originally from Wyoming, Richman moved to Kansas after joining Junghans’ race team. He first turned wrenches for Chase’s brother Grant and his Modified operation before switching to Chase’s full-time Late Model team in 2014, where he’s been the crew chief ever since.

For Richman, one of the best parts about being on the road is the friends and racing family he and the rest of the crew get to visit from time to time. He said it’s a good feeling to know that some folks actually do appreciate the work done behind the scenes to put on a great show every race night.

“Just getting to meet all of the cool people at the track,” Richman said. “We’ve got some friends that come up to us and ask, ‘Hey, you need a place to stay or wash, or do your laundry or cook?’ That’s the best part about it, just the people and how much they see what we do and how much that helps.”

Junghans and the team’s good friends at Bozard Ford have been a sponsor of the Manhattan, KS-based team for multiple seasons, and often extend their gratitude towards the crew members when they make the trip to Florida for Speedweeks each February. Decent meals are hard to come by with the travel schedule, and the crew members agree it’s nice to get away from that when possible.

“We don’t ever get to have a home-cooked meal. We’ve got friends that bring us meals at different places we go,” Richman said. “The best part is the people that take care of you on the road, just to get you out of your truck and away from work and go have fun.”

Quite obviously, these are just the fruits of the many, many labors Richman and the team put into the cars throughout the season. The larger portion of the year is spent washing, repairing and setup-adjusting on the car — tasks that require serious team organization.

Danny White, crew chief for 2017 Series Champion Brandon Sheppard and the Mark Richards Racing/Rocket Chassis house car, grew up around racing in Iowa and began working for a family friend’s Super Late Model team in the 2000s. His local opportunity faded out in 2010, and White began searching for a new team to turn wrenches on. A reference from Steve Francis got the attention of fellow hall-of-famer Rick Eckert, who moved White out to his York, PA race shop in the spring of 2011. When Eckert was hired to be Josh Richards’ replacement aboard the Valvoline No. 1 in the spring of 2014, White went with him, and stayed in West Virginia to become part of Mark Richards’ full-time team, where he currently resides in 2019.

White said the best phrase to describe his position on his team is “a grind.” The late nights at the track and the quick turnaround time out of bed and into the toolbox in the morning is the hardest part in his mind, but it’s all worth it at the end of each night.

“It’s an ever-changing schedule,” White said. “During the week, you try to be a bit more regular at the shop, and when you’re racing, you’re up until midnight. When you get to the next track, it’s usually two or three in the morning, and then you’re right back up at 9:30 getting your maintenance and other stuff done… it’s fun, but it’s just a lot of hours.”

“It’s just like any job. There’s days where you wonder why you do it. But most of the time, you enjoy it,” White added.

As is with any other national touring team, every bit of maintenance must be completed in a single day for back-to-back nights of racing. Washing the car down, checking internal engine components, repairing the body, cleaning shocks and springs, tire grooving and front-end lubrication, even tightening every nut and bolt on the car has to be done to complete the pre-race routine, White said.

That checklist stays the same every day, in addition to any special repairs.

“That’s on a good day,” White added. “That’s if you didn’t tear any suspension off or [damage] any body stuff, if goes pretty good. But if you’ve got any of that, it can make for a long day.”

Shawn Gage, crew chief for the Weiss Racing No. 7, has been a part of a race crew since he was just 14 years old. A previous member of Dan Schlieper’s team, Gage met former Series champion Scott Bloomquist through his work in Tennessee as a crewman and was eventually hired by engine builder Vic Hill. When Ricky Weiss began piloting cars for Hill, Gage joined his crew full-time. Now in 2019, Weiss and Gage are still a driver-crew chief owner, tackling the World of Outlaws Morton Buildings Late Model Series tour in a chase for the Rookie of the Year title.

Gage has been up and down the road with Weiss and the rest of his team many times. Weiss’ race shop is located in Headingley, Manitoba, Canada – a 22-plus hour drive from mentor Bloomquist’s race shop in Mooresburg, TN. Gage admits the long hours on the road away from family is one of his least favorite parts.

“It takes a toll on everything,” Gage said. “Your dogs, your girlfriend, your life and family. You kind of just devote your life to it, if that’s what you want to do. In order to be successful, you have to eat, sleep and drink it.”

Somewhere in the midst of racing, maintenance and traveling lies a usually short block of sleep. Gage remarked that he and the crew only make time for rest when they can find a pocket of time.

“The sleep is something that I guess just gets added to the day whenever it happens,” Gage said.

But through each team’s struggles and hard work is a reason why they show up to the track ready to go every night. Like Richman, White and Gage power through the grind each week for their own specific parts of enjoyment in the sport.

“One of the things I enjoy the most is when people ask what I do and I get to tell them,” White said. “I say, ‘I get to go to races and work on racecars’ and they’re like ‘Oh wow!’ To me, that’s one of the more fun parts of my job.”

“For us, it’s being able to adapt to every track and just get better all around, that’s the goal,” Gage said. “Following the Series is great because you’re running against stiff competition every night, and when you can go line up at places you’ve never been [and perform well], that’s what we do it for. We do it for the wins, we do it for the competition in general.”

The grind will start back up for each team this Friday at Duck River Raceway Park and Saturday at Smoky Mountain Speedway. Join us at the track or watch every lap live on DIRTVision.com with your Late Model Fast Pass!