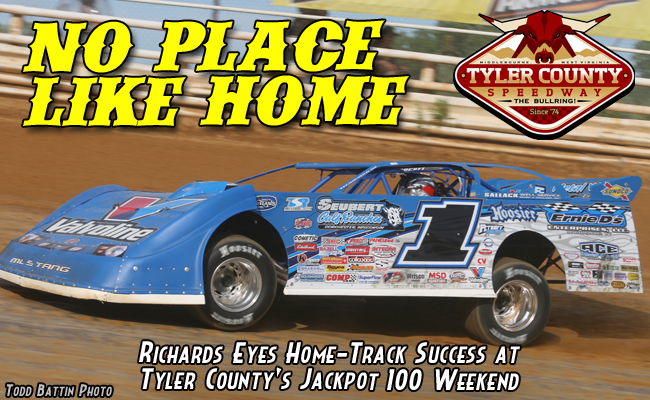 MIDDLEBOURNE, W.Va. – May 19, 2015 – Josh Richards has logged memorable performances and achieved career milestones at dirt tracks all across the country during his stellar racing career, but few of those tracks hold a special place with the three-time World of Outlaws Late Model Series champion like Tyler County Speedway.

Richards, whose home in Shinnston, W.Va., is less than an hour’s drive from Tyler County’s quarter-mile oval, will return to the bullring track this weekend for a pair of WoO LMS events during the fourth annual Jackpot 100 Weekend. Separate WoO LMS programs on Saturday and Sunday give Richards the rare and exciting opportunity to race in front of family, friends and home-track fans.

“That’s my home crowd with all the fans and a lot of relatives that hardly ever get to see me race,” said Richards, who will make his first appearance at Tyler County since 2013 after missing the 2014 Jackpot 100 while sitting out most of the season due to nerve problems in his hands. “A lot of people I know will be there – friends that I went to school with and people that I grew up with and have known really my whole life. It makes racing there unique and exciting for me. Without a doubt I always love going there.”

While he considers Tyler County his home track, Richards has had surprisingly few chances to compete there since he launched his career behind the wheel of his father Mark’s famed Rocket Chassis house car in 2004. He entered just one event at Tyler County during his first Late Model season, and then went nearly five years without competing at the track once he became a full-time WoO LMS competitor in 2005. Even since the WoO LMS made its first visit to Tyler County in 2009, Richards has only raced at the track six times.

Although he has limited experience at Tyler County as a driver, Richards has a long history at the track that goes well back into his childhood. As a youngster, Richards frequently visited Tyler County as a crew member for his uncle Robbie Scott’s race team and at times helped other area competitors before beginning his own career. It’s those experiences that Richards recalls fondly every time he returns to Tyler County.

“I don’t get to race there very often because we travel so much, but going there always brings me back to my childhood,” said Richards, who scored his first-ever home-state victory when he won during the opening night of the 2013 Jackpot 100 weekend. “I used to go there years ago with my uncle Robbie racing or I’d go help some guys. It’s the only track I go to that really brings me back to my childhood like that, and that’s never changed.”

Of course, it’s not just the recollection of childhood memories that Richards loves about racing at Tyler County. Known for its close racing and its circular shape that requires drivers to keep their cars sideways nearly all the way around it, Tyler County also fits Richards driving style quite well.

“It’s a fun little bullring,” Richards said. “It’s not overly fast, but you’re constantly turning all the time. The object is to be able to turn as much as you can and be able to keep doing it throughout the race without getting loose. The guy that can rotate and drive off the bottom without pushing out toward the wall is going to have a good night.”

Richards hopes that his home-track fans are able to cheer him on to a pair of strong performances this weekend. After returning to victory lane in just the fourth WoO LMS race of the season, Richards hasn’t won since, and with seven top-five finishes in 14 races, he has also struggled with consistency.

“We put ourselves in a bit of a hole, but right now our goal is to get things rolling and start winning more races,” said Richards, who enters the Jackpot 100 weekend third in the WoO LMS standings, 94 points behind leader Shane Clanton. “It’d be awesome to get that started here this weekend.”

Located 3 1/2 miles south of Middlebourne at the Tyler County Fairgrounds, Tyler County Speedway is set for three days of Memorial Day weekend fun at the quarter-mile oval. A practice session from 2-5 p.m. kicks things off on Friday, before a concert featuring Season 7 VOICE Winner and Team Blake Shelton member Craig Wayne Boyd. Pit gates open at 1 p.m. on Friday with concert gates opening at 5 and the concert beginning at 7:30.

Pit gates open at 2 p.m. on both Saturday and Sunday with general admission gates opening at 3. On-track action begins with hot laps at 6:30 both nights.

Three-day general admission tickets are priced at $60, with children ages 7-12 $15 and children 6 and under free. Three-day pit passes are $80. Single-day general admission tickets are $25 on Saturday and $35 on Sunday. Reserved seating is available for the weekend for $5 extra. Admission to Friday’s concert is $20. For more ticket information or to order tickets call 304-771-5661.

More information about Tyler County Speedway and the Jackpot 100 weekend is available on the track’s website at www.tylercountyspeedwayonline.com.

The WoO LMS made its first-ever stop at Tyler County on May 31, 2009 for a 40-lap event won by 2007 series champion Steve Francis of Ashland, Ky. Outdueling a pair of home-state drivers, the fourth-starting Francis overtook Eddie Carrier Jr. of Salt Rock on lap 18 and pulled away from Steve Shaver of Vienna on a late restart to score the victory.

The WoO LMS returned Tyler County Speedway on Sept. 3, 2011 for a big race night featuring a unique three-race format during the Black Diamond 125. In a memorable performance in front of his home-state fans, Jared Hawkins of Fairmont scored a career-high $20,000 victory during the night’s 45-lap finale. The race concluded an evening that saw Pat Doar of New Richmond, Wis., and Shaver each score $10,000 preliminary feature wins in events that set the lineup for the finale.

The inaugural Jackpot 100 was held at Tyler County on May 26, 2012 and was ruled by Darrell Lanigan. The eventual 2012 series champ dominated the 100-lap event to score a $25,000 victory in one of the biggest single-day events in WoO LMS history.

The second annual Jackpot 100 featured a WoO LMS doubleheader weekend May 25-26 of 2013 with Josh Richards of Shinnston, W.Va., claiming a popular home-state victory for the Rocket Chassis house car team in the $6,000-to-win weekend opener. Lanigan returned to the spotlight the following night, outdueling Richards to claim the $15,000 finale.

The Jackpot 100 ran as a two-day, $20,000-to-win event in 2014 and produced a battle between veteran racers Davey Johnson of Latrobe, Pa., and Chub Frank of Bear Lake, Pa., in the 75-lap A-Main. Johnson came out on top of the battle, earning his richest victory in over a decade.