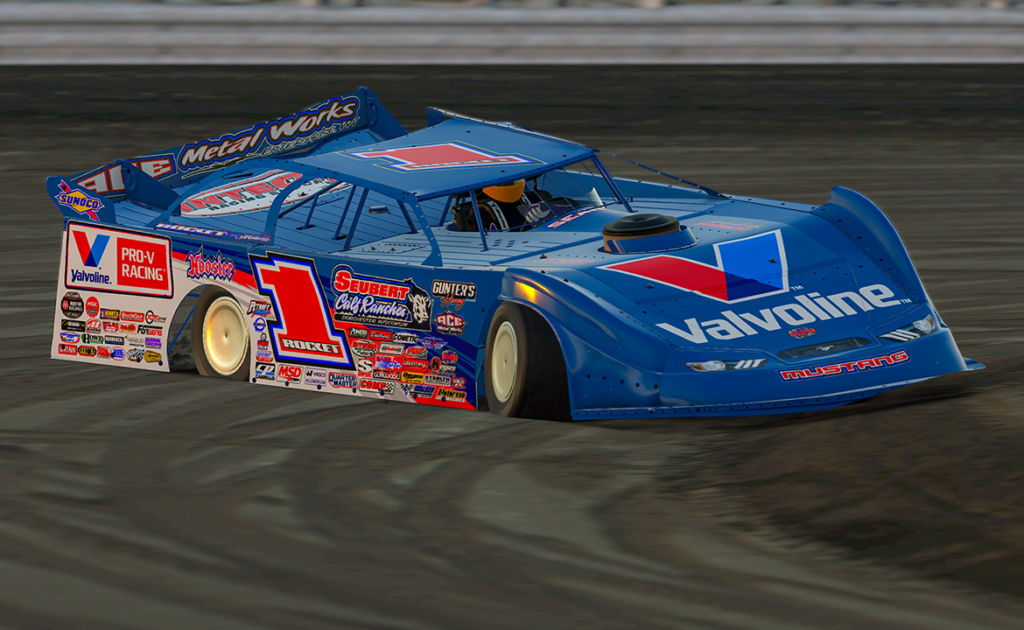 CONCORD, NC – He’s won once on the real track already this year. Now, the two-time and defending World of Outlaws Morton Buildings Late Model Series Champion Brandon Sheppard looks to capture a different kind of victory – a virtual one – in the wide world of sim racing.

He’s had only a few starts so far in World of Outlaws iRacing Invitational competition – twice with the NOS Energy Drink Sprint Cars. Sheppard did not previously have simulator equipment of his own to use and was instead using a cousin’s.

Like anything else, even for the real-world pros, practice makes perfect in sim racing. Now, Sheppard’s going to be getting all the practice laps he can handle with the acquisition of a new sim rig that he picked up last week.

Rocket1 Racing owner Mark Richards looked into getting his driver some proper equipment of his own not long after the Invitationals began and decided to assemble one together with parts from various places.

“We put together some stuff from different people because there’s not parts available for them,” Richards said. “Amazon’s out of everything, and anywhere that normally would have stuff in stock that you could have used, like Best Buy, all that stuff is gone right now because of this crisis and people have bought it up.”

Richards said he had originally ordered part of a sim rig from Extreme Sim Racing, but after had been contacted by a friend who said he had one available as well and decided to use that one instead. He went out and bought the necessary computer and monitor hardware, then put it all together with a wheel and pedals set that Rocket1 crew chief Danny White had at his house.

After assembly at the Rocket Chassis shop, Sheppard brought it back to his home in New Berlin, IL, and is now ready to turn some laps in the virtual world in preparation for the upcoming World of Outlaws iRacing Invitational events on DIRTVision.

Since Sheppard’s absence in the iRacing Sprint Car field, however, fans may have noticed that he has not been at the controls of the virtual Rocket1 Racing ride in the Morton Buildings Late Model events. Instead, Richards had appointed USAC Midget/Sprint Car driver and iRacing standout from Sutter, CA, Logan Seavey, to run the iconic Rocket Chassis house car colors. He’ll be back in the car when the Invitational hits Lernerville Speedway tonight on DIRTVision at 7 p.m. ET.

Seavey has been victorious in several popular iRacing events over the past few weeks in multiple car types, which prompted Richards to get in touch with the young open-wheel star about driving the virtual Rocket1 car.

“When they told me that we could put somebody else in the car, I picked Logan Seavey. The reason I picked him was because he had just won a Sprint Car race and was leading the second one. And I had never watched it, I just heard it. I heard that this kid won and figured he must be pretty good,” Richards said.

Even though it is technically not a part of real-world racing, Richards still believes it is important to always represent sponsors in the same light, no matter where they are shown. The same goes for the real-world team and car, and he felt Seavey would be a great candidate to do just that, given the winning history with real-world pilots Josh Richards, Sheppard, and the various other wheelmen of yesteryear.

“The image of the Rocket1 house car and [being competitive] – there’s a big history as far as that car goes,” Richards said. “It’s like anything else, you want to represent your sponsors in a respectful way. You want your sponsors to be seen as successful on the car.”

Under a normal racing season’s conditions, Sheppard is normally found flying the Rocket1 Racing/Rocket Chassis house car’s colors on the real track. Thus, Richards came to Sheppard before Seavey and asked about his experience and availability to take the reins of his virtual weekend cruiser – to which Sheppard indicated that he, like several other drivers in the field, had very limited time in the sim seat. That’s when he got in touch with Seavey, who could not have been gladder to join the team.

“I didn’t even know I was racing this thing until a couple of hours ago,” Seavey said in his post-race interview after the first Late Model Invitational race at The (virtual) Dirt Track at Charlotte. “I talked to Mark Richards and he asked me to run this Rocket Chassis car, and it’s pretty cool to be able to do that for him.”

“When you’ve got a corporate sponsor, you have to represent that sponsor,” Richards said. “It’s like I told Logan, I said ‘this is all I ask – that you represent that car and the sponsors with respect.’ And he’s done that very well.”

Although they’ve never met in real-life, Richards said it’s been great getting to know Seavey.

“Logan’s a super kid. I’ve gotten to know him over the past week and a half. I’ve got a lot of respect for him because he’s a down-to-Earth kid and he doesn’t have a fancy rig. He’s doing it off of a desktop, a 28-inch monitor and a lawn chair he’s sitting in.”

With all of this new technology coming into the spotlight, Richards obviously still much prefers the real-world activity to the virtual scene. However, he knows the eSports activity will help grow the sport.

“For what we’re in right now, it’s a good deal. It keeps people interested in the sport. I think it’s going to help us when we got back to real-life racing, at least I hope it does,” Richards said.