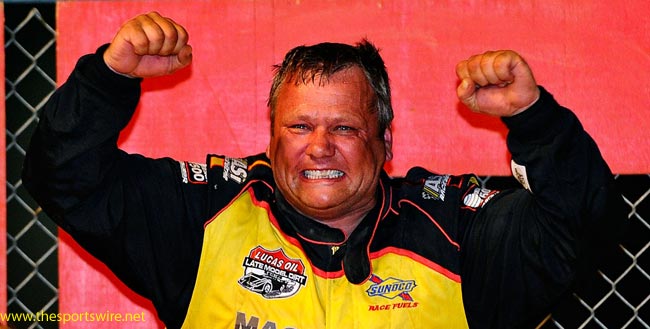 O’Neal, 46, of Martinsville, Ind., passed Billy Moyer of Batesville, Ark., for the lead on lap 87 and held on the remainder of the 100-lap distance to earn the MasterSbilt house car team a whopping $100,000 – the largest first-place payoff offered anywhere in the country for a dirt Late Model event in 2011.

“What a long time coming,” said O’Neal, expressing relief over his coveted win in a major race. “This is pretty awesome. I drove the wheels off this thing for a hundred laps and finally we got ‘er done at the end.”

A former DIRTcar Summer Nationals champion known for his hard-charging style, O’Neal crossed the finish line 0.700 of a second in front of the legendary Moyer, who swept last year’s Dream and World 100 at Eldora and was bidding to become the first driver to win three of the track’s marquee events in a row. Moyer started second and led laps 1-86 in his Victory Circle car.

Polesitter Darrell Lanigan of Union, Ky., made several strong attempts to overtake Moyer for the lead during the race’s middle stages but was hampered late by an engine skip and settled for third place in a Rocket mount. Dream rookie Will Vaught of Crane, Mo., placed fourth after starting third in a Warrior and Eddie Carrier Jr. of Salt Rock, W.Va., registered a career-best Dream finish of fifth after starting one spot better in a Rocket.

Driving a Jay Dickens-powered car sponsored by Magnaflow Exhaust, O’Neal ran the race of his life to become the 11th different winner of the Dream and the second driver from the Hoosier State to capture the event.

“I talked to (mechanic) Ronnie Stuckey before the feature and he said, ‘Just remember, about lap 60 we need to be up there in striking condition,'” said O’Neal, whose best finish in eight previous Dream starts was third, in 2002. “That’s what we done.

“I started off and held my own, and for probably 20 or 30 laps I didn’t know if I had a car (to win) or not. Then when I started picking up the pace 40, 50 laps in, I kept thinking, Well, we might have a shot here. I just kept getting one car at a time every few laps. I finally got up there in the top five (on lap 31), and then third (passing Vaught on lap 64), and then second (overtaking Lanigan on lap 79). I thought, I’m gonna win this race.”

In a fast-paced race slowed by a single caution flag (on lap 45 for a turn-four spin by Jimmy Owens of Newport, Tenn.), O’Neal “kept digging” and found a way to sneak by Moyer for the lead rounding turns one and two on lap 87. Passing was difficult on a high-banked, half-mile oval that developed a dominant outside lane, but O’Neal was up to the challenge.

“The way (the track) was (fastest) around the top, there were some slide jobs that probably weren’t real great,” said O’Neal, describing the strategy necessary to advance forward. “But that was the only way you were gonna get the job done – and I wasn’t gonna give up on this one.”

Detailing his aggressive race-deciding pass of Moyer, O’Neal noted, “You know, we’re down in crunch time, and he’s won these things several times and I haven’t. He probably should understand a little. It was hard, close racing.”

Moyer, who has won the Dream twice and the World 100 a record six times, felt he was ultimately a victim of circumstance after controlling more than three-quarters of the event.

“Everything just worked out right for him at the right part of the racetrack that lap,” said Moyer. “If the lapped car (Brian Shirley of Chatham, Ill.) wouldn’t have been there (entering turn one), we would’ve gone in there and might’ve bumped, but I think I could’ve beat (O’Neal) back off the corner. Once (O’Neal) slid me, I just couldn’t romp on through that little hole there because (Shirley) kind of had me blocked.”

Moyer, 53, fell a half-straightaway behind O’Neal before rallying in the final circuits. He closed within a couple car lengths on the last lap.

“It’s definitely hard to lose like that – especially when you go to the pay window and there’s that much of a difference in the money (between first and second place),” said Moyer, who earned $20,000 for his second career runner-up finish in the Dream.

Lanigan, who turned 41 on June 3, was Moyer’s prime challenger for most of the distance. The 2003 Dream winner and four-time victor on the ’11 World of Outlaws Late Model Series was outgunned for the lead at the initial green flag but never let Moyer out of his sight.

On more than a half-dozen occasions Lanigan dived to the inside of Moyer but was unable to gain enough traction to pull off a pass. He was beginning to step up his assault with less than 30 laps remaining when his car’s powerplant began to develop a skip, hampering his ability to smoothly negotiate the turns and causing him to lose second to O’Neal and steadily fall out of touch with the leaders over the final tours.

Jeep VanWormer of Pinconning, Mich., started and finished sixth, running just outside the top five throughout the race. Chris Madden of Gray Court, S.C., moved forward from the 10th starting spot to finish seventh, while Bart Hartman of Zanesville, Ohio, placed eighth in the Ernie Davis-owned No. 25; two-time defending WoO LMS champion Josh Richards of Shinnston, W.Va., finished ninth – the same spot he started the event – after sliding back to 13th at the initial green flag; and 17th-starter Steve Shaver of Vienna, W.Va., was 10th.

Landers spun a ‘6’ on the inversion wheel, however, saddling him with the sixth starting spot in the first of Saturday night’s six 20-lap heat races. The driver of NASCAR star Clint Bowyer’s No. 777 opted to forego running the heat, instead dropping to the rear of the field for the green flag and using his fast-time provisional to start 19th in the Dream. He was never a factor in the A-Main, finishing one lap down in 17th.

Smith, who swapped engines after falling one spot short of transferring through his heat race, dropped out of the Dream. He was credited with a 20th-place finish, completing 66 laps in his first start in the event’s A-Main since 2007.

Three others WoO LMS regulars entered the Dream but failed to qualify: Shane Clanton of Fayetteville, Ga., whose weekend ended when his Rocket car slowed with a broken right-rear axle tube as he ran second on lap 17 of the third heat; Chub Frank of Bear Lake, Pa., who missed qualifying through the B-Main by one position; and rookie John Lobb of Frewsburg, N.Y., who dropped out of the C-Main.