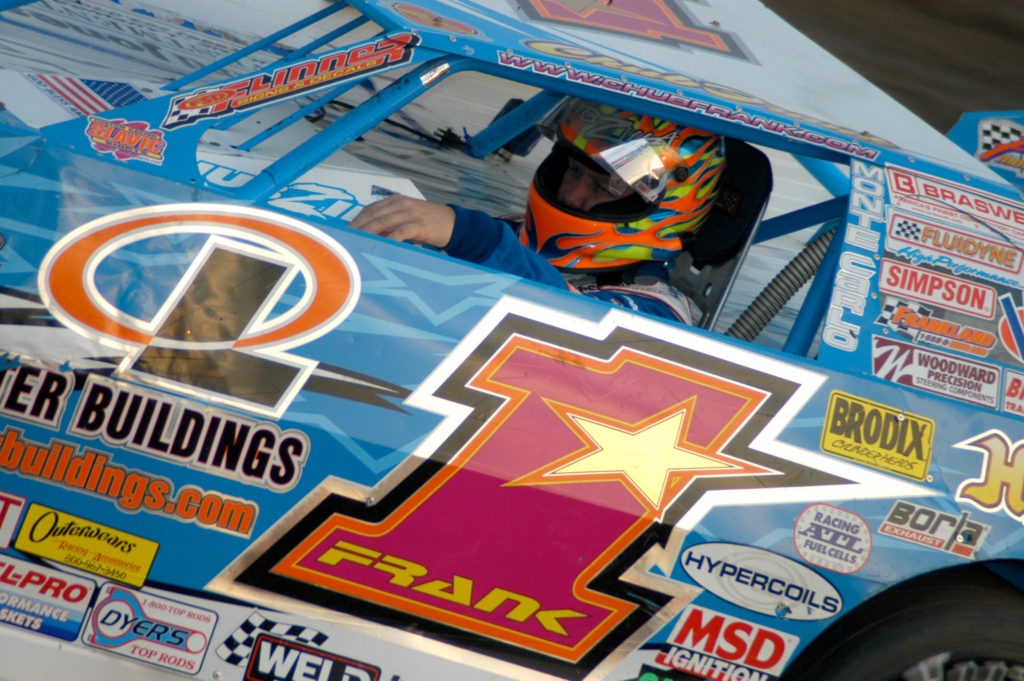 One of the busiest dates of the month, May 18 has featured four previous World of Outlaws Morton Buildings Late Model events. Among the storylines, Chub Frank won on back-to-back years with a 2007 triumph at Michigan’s I-96 Speedway and a 2008 victory at Lincoln Speedway in Illinois. In 2014, Darrell Lanigan kept his hot streak rolling with at Tennessee’s Duck River Raceway Park, making it three wins in four races. One year ago today, in 2019, Brandon Sheppard beat Ricky Weiss and Lanigan at Ohio’s Wayne County Speedway, a remarkable 50-lapper that could contend for race of the year.

Enjoy this look back on May 18 in World of Outlaws Late Model Series history:

The summer of 2007 was one to remember for Bear Lake, Pa. native Chub Frank. He rattled off six wins over four months, and it all started with the World of Outlaws Late Model Series debut at I-96 Speedway. Drawing the pole position, Frank asserted his dominance over the field with a 50-lap wire-to-wire run at the Odessa, Michigan facility. The lone caution of the race flew on lap 37, but could do little to no harm in affecting Chub’s run toward the checkered. A young Josh Richards followed him to the stripe with Dennis Erb Jr., Tim Fuller and Shane Clanton inside the top five.

For the second year in a row, May 18 was owned by Chub Frank in dominating fashion. He once again controlled the feature in a flag-to-flag route, this time at Lincoln Speedway in the “Land of Lincoln 40.” Coming from the outside pole, Frank bested pollster Shane Clanton on the opening circuit and survived a pair of lap 14 & lap 36 restarts to put the No. 1* back in victory lane. It was once again Richards behind him in second with Steve Francis, Darrell Lanigan and Rick Eckert rounding out the top five.

In a caution-free dogfight that ran 50 laps in just under 12 minutes, Darrell Lanigan of Union, Ky. tracked down Tim McCreadie in lap traffic, stole his thunder, and ran off to keep his hot streak rolling. Making it three wins over the last four World of Outlaws Late Model features, Lanigan had to fight by Rick Eckert and then McCreadie with 20 laps left to ensure another $10,000 payday. McCreadie had to settle for second in the non-stop feature with Mike Marlar coming to third, Rick Eckert finishing fourth, and Ray Cook ending up fifth.

A candidate for race of the year, Brandon Sheppard’s May 18, 2019 triumph over Ricly Weiss and Darrell Lanigan was simply magical. The closing half of the 50-lapper at Ohio’s Wayne County Speedway sent fans at the track into a frenzy and dropped jaws worldwide on DIRTVision. Dueling back-and-forth in the midst of a see-saw battle, Sheppard, Weiss and Lanigan went to war, using every inch of the surface to their advantage. In the end, Sheppard outlasted ’em all for a thrilling win over Weiss, Lanigan, Dennis Erb Jr., and Doug Drown. The highlights below are a must watch!