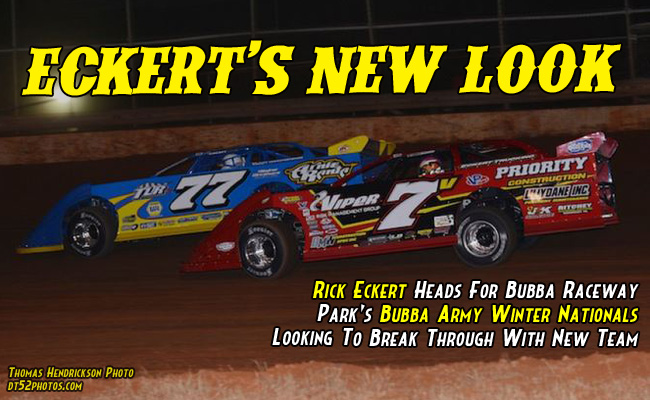 After his status as a full-time World of Outlaws Late Model Series competitor came into doubt over the offseason, Eckert, 49, of York, Pa., not only landed a ride that has allowed him to remain on tour for the 12th consecutive season, but one that he also believes will allow help him contend for a championship and return to victory lane in 2015.

Eckert, who less than a month ago announced that he had teamed with Paul Crowl and Shawn and Lisa Martin of Viper Motorsports to field a new-look No. 7v MasterSbilt by Huey machine on the WoO LMS this season, hopes his new team finds success this weekend at Bubba Raceway Park, which welcomes the WoO LMS for a pair of events during the fourth annual Bubba Army Winter Nationals Friday (Feb. 13) through Sunday (Feb. 15).

“It’s one of those places that you never really know what to expect,” Eckert, the 2011 WoO LMS champion, said of Ocala’s unique egg-shaped, 3/8-mile oval promoted by nationally known radio show host Todd ‘Bubba the Love Sponge’ Clem. “It’s the kind of place that can be really fast or slippery and slow.

“But I’ve won at Ocala before and you always look forward to going back to a place where you’ve had success. That makes me excited to go there, but really I’m just excited and happy to be down here racing.”

Indeed, just being in Georgia and Florida for this year’s WoO LMS season-opening stretch of racing is a feat in of itself for Eckert. After filling in for the sidelined Josh Richards in the Rocket Chassis house car last season, Eckert wasn’t sure if he would be able to remain on the series full time after vacating the seat of the No. 1 machine to make way for Richards’ return this season.

It wasn’t until a deal was struck with Crowl and the Martins in early January that Eckert was certain he would remain on the WoO LMS for the 2015 season.

“Over the offseason it was frustrating because I really didn’t know where I’d be,” said Eckert, who was one of the original 12 drivers that joined the WoO LMS when the tour was restarted under the World Racing Group banner in 2004. “I’ve been here since the beginning, and it’s something that’s important to me. I’m definitely happy to still be here.”

Eckert will use the three nights of racing at Ocala to continue the adjustment process to his new race team after an up-and-down performance in his first action in the tour’s season-opening weekend Feb. 6-7 at Screven Motor Speedway in Sylvania, Ga.

After rushing to prepare the team’s equipment in time for the Screven’s Winter Freeze V, Eckert debuted his new ride with an 11th-place finish in an unsanctioned tune-up event at Screven on Feb. 5. He suffered a broken brake caliper during Feb. 6’s season-opening A-Main for the WoO LMS, relegating him to a 19th-place finish – his worst result in a WoO LMS event in nearly three years.

Eckert rebounded with a ninth-place effort in Feb. 7’s Winter Freeze finale, but he knows his team still has plenty of work to do to achieve the performance level to which he’s accustomed.

“We’ve still got a ways to go, but we’re OK for this deal not coming together until about four weeks ago,” Eckert said. “We had to build cars and get motors, so it’s sort of amazing we even made it (to Georgia and Florida). But we’re here and we worked hard to get here, so we’re gonna work hard to make the most of the trip. It wasn’t quite the way we wanted to start, but we made some progress.”

While Eckert may be allowing himself and his new team plenty of time to gel before he worries over his performance, he also knows he’ll need to get things rolling soon if he’s going to challenge for a second WoO LMS title this season.

“It’s really important to run good down here and not dig yourself into a hole early in the year,” said Eckert, who finished second to Darrell Lanigan in the 2014 WoO LMS points chase. “Last year we left Florida way behind Darrell in the points and just never could get caught up.

“Hopefully everything works out the way that we hope that it does and we get things going like I know we can. It won’t be from lack of effort, I can tell you that.”

“We’re here to win races. That’s why we do all this work,” Eckert said. “If it wasn’t for winning we wouldn’t work in the shop like we do or travel up and down the road like we do. Winning races is what makes you keep going, and we’re gonna keep going.”

Bubba Raceway Park is a semi-banked, 3/8-mile oval that first opened in 1952, making it one of Florida’s oldest race facilities. The track operated as a clay oval for its first 45 years before being covered with asphalt. After 10 years as a pavement track, it was converted back to a clay surface in 2008.

Bubba Raceway Park has hosted 11 WoO LMS events since the tour made its first visit in 2010. The track hosted the series once in March of both 2010 and ’11 before the track joined the tour’s annual February slate in 2012. The track hosted three series events in 2012, ’13 and ’14.

Darrell Lanigan leads all drivers with six WoO LMS victories in Ocala’s 11 series events. Josh Richards has won two series events, while Rick Eckert, Brady Smith and Brandon Sheppard all have one win at the track. The track’s highest-paying WoO LMS event was a $20,000-to-win program claimed by Richards in 2013.

Lanigan also leads the list for most top-five WoO LMS finishes in Ocala with 10 in 11 appearances, while Richards has finished among the top five in all of the eight WoO LMS events he’s entered at the track. Chub Frank, Tim McCreadie, Shane Clanton, Mike Marlar, Rick Eckert and Brady Smith all have three top-five results.